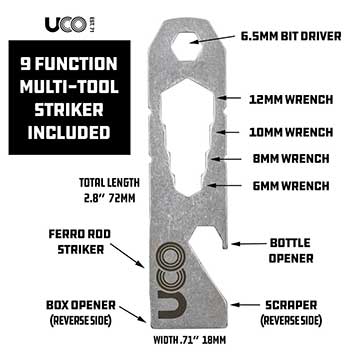 This summer, the UCO Titan Fire Striker landed on my doorstep for testing.  I have all sorts of uses for a ferrocerium rod, so I was happy to get to work.  I’ve tested several pieces of UCO gear over the years and I’ve always found them to be well made and a good value.  The Titan Fire Striker checks those boxes for sure.

Use and Ferro Rod History

For anyone that does not know, a ferrocerium rod is used to make sparks and get fires going.  You can use them to light gas and alcohol stoves or light tinder to start a campfire.  These things make a ton of sparks just by scraping them.  I got curious and looked up some information on ferrocerium rods.  An Austrian named Carl Auer invented the stuff in 1903.  Ferrocerium is made of iron and cerium and the stuff is ignited when you quickly scrape small shavings from the rod.  Modern ferro rods add a few more metals including magnesium to the mix.

The UCO Titan Fire Striker comes with a multifunction striker attached to the rod with a lanyard and small carabiner.  I’m usually not a big fan of flat multi tools but in this case, it really makes sense.  The striker has a nice sharp edge to scrape the rod and it can be used as a screwdriver, bottle opener or a wrench with 4 hex sizes.  The cut outs don’t affect the scraping function at all, and the hole cutouts make the striker lighter and easy to hold.

Making sparks with the UCO Titan Fire Striker is easy.  Me, my wife, and two young daughters can get it done easily.  The harder and faster you scrape, the more sparks you get, but it doesn’t take much effort to produce some sparks.  You’ll need to scrape a few times to get to the metal below the black coating, but once you do, there’s no problem.

UCO says the ferrocerium rod is capable of 20,000 strikes, and I’m going to take their word on that.  We tested the rod quite a bit.  I’d say we scraped the thing a few hundred times without taking much metal off.  The sparks burn at around 5400 degrees Fahrenheit, or so the internet says.  I’m not touching them so I’m not going to argue with science.  The ferro rod will make sparks no matter how cold it is and even in wet conditions.

I plan to carry the UCO Titan Fire Striker with me backpacking.  I like to use alcohol stoves and lighting them with a ferro rod is easy.  It is also a cinch to light up a cotton ball soaked with Vaseline and get a campfire started.  If you are in to bug out kits or emergency preparedness kits, a ferrocerium rod is a great choice for that.  You could also use the sparks from the ferrocerium rod as an emergency signal in a pinch.

The UCO Titan Fire Striker is a sweet piece of gear that only weighs 3.4 ounces or 96 grams.  The rod itself measures 4 inches long by ½ inch in diameter.  The striker measures 2.8 inches by 0.7 inches by 0.1 inches.  Removing the striker from the lanyard using the small carabiner is easy and makes scraping the rod much easier.

MSRP on the UCO Titan Fire Striker is set at $14.99.  At that price, you just can’t go wrong.  Ferrocerium rods are so useful that I think everyone should have one.  Click here to visit ucogear.com.

I’d like to thank UCO for sending the Titan Fire Striker over for testing and review.  We at Industry Outsider have limited budgets, and the ability to provide honest, useful information on gear hopefully benefits everybody.