I happened to catch some of Dave Scrod’s designs while browsing a forum, and after visiting his bikeage! site, came away impressed not only with his modest yet striking designs, but also his simple philosophy regarding the products he sells:

“The mission of bikeage! is simple: to create and offer straightforward, quality products to fellow cyclists without the outrageous price tags too often associated with any sort of popular scene/culture/whatever. You may not find anything particularly “high fashion” here but I personally don’t think anyone should be trying to sell a t-shirt for 35 bucks and be able to breathe easy.”

While it’s refreshing to see a $12 shirt that’s actually cool, what’s even more noteworthy is that Dave’s plan is to start selling components through his site, with the goal of eventually opening a small bike shop/co-op where he lives, which is apparently under-served on the co-op front. If only that sort of passion for cycling was more common today, the world would be a better place.  Here’s some of his work, and I’ve thrown a banner up for him as well. Have a look if you’re looking for some new threads, now that’s it’s warming up a bit. (Ok, that last part was crap, as it’s been snowing steadily for the last three or four hours where I live) 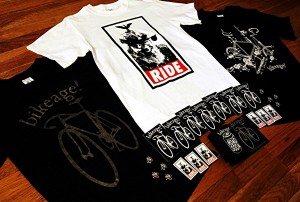