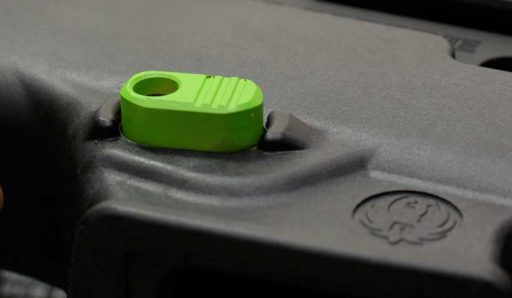 While checking the Ruger website for accessories, I found a magazine release button for the PC Carbine and PC Charger from an independent outfit called TSW (The Secret Weapon). It seems Ruger has really embraced the aftermarket suppliers. To me, this is just awesome. They’re promoting these guys that are innovating out of garages and home workshops, right alongside big established brands. Naturally, I got in touch with Mark, owner of TheSecretWeapon.net, to find out a little more, and also get some gear to test. The first item he provided was his Rail Mount Adjustable Monoopod, which I really liked. And since I was looking to upgrade my PC Carbine I got one is his extended magazine releases, pictured below.

Machined from billet aluminum, the extended magazine release button I received is a bright green. Black, red, and FDE (flat dark earth) are also available. As you can see from the photos, it’s much taller than the factory unit. This helps it stick out, making it a lot easier to actuate. That was my main reason for replacing the original one. It’s so low-profile, it will never get bumped, but it’s also not so easy to release the magazine when you want to. There are also some machined grooves which add a little visual appeal and traction. So it’s both visibly and tactilely an improvement, no matter which color you choose.

The correct sized wrench and an extra-long screw are both included. After making sure the firearm is unloaded, it’s just a matter of removing the factory screw, and taking off the original button. To swap the release to the other side, pull out the spring, and push the rest of the mechanism out, then reinstall on the opposite side. While holding the flat part of the installed release in place, position the spring, and then the button. Use the longer screw to attach the new button. It’s far easier to do than it is to explain. If you can remember “righty tighty, lefty loosey”, you got this.

I’ve installed more than one aftermarket extended magazine release on both the PC Carbine and the Charger version. From this I’ve learned that there is no right or wrong side, only personal preference. And I like this button on the left side. It doesn’t get pressed by accident, and since it stands out more prominently (in size and color), it’s easier to hit when I want to. When using the thumb of my supporting hand, the magazine is practically in my palm. So it’s natural to strip it out in a single smooth motion. Even though I’m not using this firearm in competition, that sort of ergonomic advantage is important.

In the interest of being thorough, I tried it first with the standard Ruger magazines. And then with the Glock magwell installed, I tried all the fun variations. With the smaller (15 or 17 round) magazines, I noticed I preferred to bring my hand down to use the pad of my thumb. With 21 or 33 round sticks, I used the base of my thumb, at the palm. But with the drum, I went back to the pad of my thumb. Subconsciously, I think it was a matter of providing different support, depending on the magazine size and capacity. Could just be that I’m less concerned about dropping an inexpensive Magpul than a big stick or drum. But the point is that it worked well with all the magazine options I had on hand.

This is one of those upgrades that is really straightforward, and works as it should. It’s a definite improvement over the function of the factory button. Yet it doesn’t cost much, nor is it difficult to install. The color options make it easy to customize your Ruger while improving performance. And I’ve got no problem with adding a little color while making something better. For about $20, this is an easy choice to make. While it is available on Ruger’s website, I recommend ordering direct, and supporting small business at TheSecretWeapon.net. It may cost a few dollars more, but that money helps independent manufacturers like Mark continue to come up with new and innovative products.

On Mark’s website, you’ll find plenty of other handy products as well. There’s a one-piece billet aluminum scope base for the Ruger American Rimfire.  It’s priced a little higher than a pair of #12 Weaver bases, but is also more solid. He’s got monopods and bag sliders too. I also saw a cool barricade stop. And for Ruger PC Charger fans, he’s got an adapter for the rear Picatinny rail that allows the use of buffer tubes or receiver extensions. Plenty of cool little parts that aren’t super easy to find elsewhere. Check it out.

Comments? Questions? What’s your favorite magazine release for the Ruger PC Carbine or PC Charger? Feel free to share below.