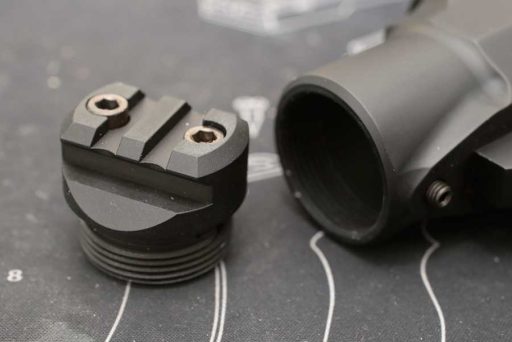 Engineered Silence (soon to be Adder Arms) offers a Sig-style MCX/MPX AR-15 stock adapter. This little $54.99 piece of machined aluminum magic threads in where a receiver extension (buffer tube) would normally go. Once installed, it allows the attachment of Picatinny-based stocks and braces. Obviously, this was probably designed with their own 10/22 Takedown Chassis Kit in mind. But it will also work with any other chassis which is threaded for a tube. And that opens up a whole new world of brace and stock options. As someone who has really (em)braced the Ruger 22 Charger platform, this is a huge problem solver for me.

It’s machined from 6061 T6 aluminum billet, with a black Type III hardcoat anodized finish. There may be some confusion in the name, with regards to the “AR-15” part. It’s definitely not designed for AR-style rifles using a buffer and spring recoil setup. That would not end well for the firearm or operator. They specifically mention the Sig P556 and Kriss Vector as being good candidates though. But if you’re reading this, you’re probably more interested in it for your 10/22-pattern firearm. So I’m showing it installed on one.

Why it’s a “Problem Solver”

With one exception, all the chassis variants I have are threaded for a tube. Which is totally fine if all I wanted was fixed stocks and braces. Yet on my latest project, I really wanted a side-folding brace. Not enough to switch to a different chassis though. I was pretty dead set on this build as I pictured it in my head. And that required the rear Picatinny rail. A few emails exchanged, and an Adder Arms branded MCX/MPX AR-15 Stock Adapter was in my mailbox less than a week later. Problem solved.

I’ll acknowledge that it’s still possible to get a folder with a buffer tube. There is a perfectly functional, although bulky adapter available for about $20. The nicer adapters have MSRPs that run over $100. For that much money, it’s also adding about an inch and a half in length. That may be an issue when it comes to keeping the length of pull legal on a Charger. At the same time, it’s not ideal to add length when the goal is to make a folder. So I’m not knocking them (I have one on order), but they’re not ideal. Also, some of the nicest braces and stocks happen to be Picatinny-based.

“If you can dodge a wrench, you can dodge a ball”. Installation of the MCX/MPX AR-15 Stock Adapter really is that easy. Thread it into the rear of the chassis, just like a tube. When it’s properly indexed, tighten the two hex screws. If your chassis or receiver has a set screw underneath, tighten that as well. For my chosen chassis, I have to do this with the grip removed. That gives me access to the rear set screw. Once installed, sit back and admire your handiwork. Because honestly, there’s not much to it, and the results are just gold. Well, when you’re done admiring it, I supposed it’s time to mount the brace. But for me, there’s always photos between each step.

I really like some of the stocks that Sig offers, but not the prices. So this may not be the best option for rifle builders, unless you’re like me, and absolutely have to have a certain part. When it comes to Chargers, it’s a whole different story. A Charger needs a brace. And a Charger with a side-folding brace is even better. Fits in a smaller bag, takes up less space in the safe. I’ve never actually taken a Charger while backpacking, but for those that do, the folding brace is where it’s at.

Installing my folding brace took less than a minute. And that includes dropping the hardware once. A single hex screw and it’s done. Boom!  The adapter does add about a half inch in length, which is not that much of a concern. Now I’ve got a folding brace on a Picatinny rail where it was previously not an option. If that doesn’t put a smile on your face, I don’t know what will. As you can see in the photo above, this is a pretty seamless install. Thanks to the Type III hardcoat finish, it’s almost hard to tell that the MCX/MPX AR-15 Stock Adapter wasn’t part of the chassis all along. And it’s nice and solid too.

I previously wrote about the company here. If you don’t want to click that link, I can save you the trouble. They have one of the most innovative chassis offerings for the 10/22 pattern firearms. As far as I am aware, they’re the only company making a chassis that works with both takedown and fixed models. So the same chassis, which includes a nice handguard, can be used with either version, requiring only a $39.99 adapter. I’m not sure how many buyers take them up on that option, but the adapter is currently sold out. So I’m guessing more than a few. And while it may not be for everyone, the fact that it even exists is what matters. The theme of this article might be “more options are always good”. If that’s the case, then their chassis follows that theme well. Check it out here.

Questions? Comments? Have any of our readers done a similar adaptation of their favorite stock or brace? Share your thoughts below.