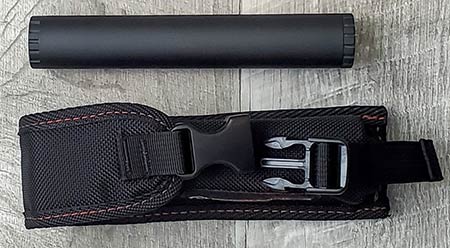 I figured it would be interesting to document my first suppressor purchase. Although the process seems daunting, it’s not. And while at least one company has a kiosk to simplify things, I chose the old-fashioned way. Although not entirely by choice. My suppressor was ordered direct from the manufacturer, and shipped to my local store, which also has a shooting range. This allowed me the opportunity to visit it while waiting for my stamp. Here’s a breakdown of the process, which took 220 days in total. Note that I’m breaking that down a bit, to separate the time from submitting my paperwork to the day my stamp was received. The days leading up to that include variables that may not apply to other people.

What’s that add up to, in time and money?

Start to finish, it was 220 days. And at full retail, the total cost would be over $740, for a .22 suppressor. Despite that wait, it all had to be paid up front. I don’t know what kind of payment plans other retailers might offer but more than likely, you’ll need to pay it all before any paperwork is started. And it looks like if I had purchased one from retail stock, my wait would have been closer to 177 days. Next step? I’m going to put some more rounds through it, and really see how it performs. It will be nice to try it outdoors, and also see if it affects the point of impact on my rifles. Plus I’ve got some different ammo options. So look for a full review down the road.

If you’re considering your first suppressor purchase, I suggest you do it now, rather than later. Yes, the wait seems unbearable. But it’s really not that bad. Especially if you can either buy from a store with a range, or have it transferred via a store with a range. Those visits during the winter, when I wouldn’t have been shooting in the snow anyway, made the wait less of a burden.

Mine came from Tactical Solutions. I’m considering ordering a 9mm suppressor next, and will be looking at Dead Air Silencers as well as SilencerCo, as both are local, and I like to support local companies when I can (see what I did there?).