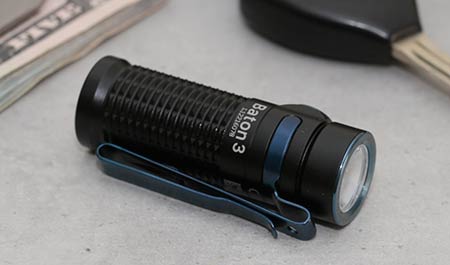 What’s in the box?

My Olight Baton 3 Premium Edition arrived in a box roughly twice the size of the previous model. It included the light, charging case, and  USB type C cable. There’s also a microfiber cleaning cloth, and of course a multi-language manual. The familiar magnetic charging cable is not included, because that magic actually happens inside the wireless charging case. More on that below.

Physically, the Baton 3 isn’t much different, at 2.48″ long, and 0.83″ in diameter, with a weight of 1.87 ounces. It has a new machined grip surface that feels more aggressive, without being too coarse. Its pocket clip allows it to be carried lens up or down, and makes it easy to clip to a hat. The magnetic tail sticks to steel surfaces for even more versatility. A single button cycles through lighting modes, and works as a charge indicator too. Inside, there’s a 3.7 volt 550mAh IMR16340 battery. The LED is good for a max of 1,200 lumens, and sits in a TIR optic lens reflector. Note there is no lanyard hole machined into the base.

There are five output levels in total, and each has a stated maximum run time (based on a full battery). The highest and lowest have their own mode of access. A double tap results in the max 1,200 lumens for about 90 seconds, and then it drops to 300 lumens. That massive initial output cuts the remaining run time down to about 75 minutes. Of course, it offers a throw of 544 feet at that output. For a mere 0.5 lumens, access the moonlight mode by holding the power button down for two seconds. Fully charged, it can run up to 20 days at this level.

The other three are accessed by holding the button to cycle through different power levels. One press turns the light one to whichever level it was on previously. From there, holding the button cycles through power levels 2 (300 lumens), 3 (60 lumens) and 4 (12 lumens).  Note that they actually cycle in the reverse of that order. Run times are 95 minutes, 7.5 hours, and then 33 hours. There is also a strobe mode. With the light on, a triple tap activates an incredibly annoying strobe. Use with care.

Hidden inside the case is a 3500mAh battery. It works similar to the ear buds that use their case for charging. Simply slipping the Baton 3 into the case will recharge it up to 3.7 times before the wireless charging case needs its own recharging via the included USB C cable. A tiny light on the case by the USB port indicates red for charging, and green for charged. Another light next to the recess for the clip does the same for the Baton 3 as it charges.

At first, I thought the case might be a bit too much of a gimmick. But I quickly realized it’s actually clever. For this light, I no longer need the proprietary magnetic base charging cable. Any USB C cable will charge the case, and then I can go about 3 times as long between recharges.

The LED, the lens, and some geek speak

Olight doesn’t specify which LED they use in the Baton 3, and I noticed that the bezel no longer indicates the CRI. CRI (color rendering index) refers to the light’s ability to render colors accurately, and the S1R II had a somewhat low CRI of 70. With a CCT (correlated color temperature) of 6000k-7000k, it’s still a bit cooler (blue) than I would prefer too. This has nothing to do with brightness, and if you aren’t concerned with seeing colors exactly as they would appear in daylight, then it’s probably not a huge concern. Just know that it’s not the ideal color.

Lens design plays a big part in the effectiveness of the light. Generally, the center is brightest, to “throw” the light over some distance, so you can see things far away. And you want some spill, to see things in the periphery of that spot. Olight uses a TIR (total internal reflection) lens, which is the most efficient means of reflecting light. It’s very focused – at about 1 foot away, the spot is roughly the size of my palm, with not much spill. But at working distances within my home or across my yard, it has enough spill that I can sweep across the yard and spot my pets easily.

Replacing my S1R II with the Baton 3 was easy enough, as the controls are all the same. The only differences are charging and a slight increase in output. So the Baton 3 ended up either clipped to my jeans pocket, dropped in my jacket pocket, or sitting on my nightstand. Whether clipped to my pants, or in a pocket, I hardly realized it’s there until I needed it.

Over the course of the week I had it, I used it for the all the things I typically need a flashlight for: Searching my yard for my deaf dog, who never comes in when he’s called. Checking under the bed to make sure we don’t lock the cat in our room. Peering into the dark corners of the gun safe. Finding the socket that rolled under my car. Scaring the neighbor’s cat that tries to sneak in our doggy door. Lighting up the neighborhood to see if we can tell who owns that annoying cat. Checking to make sure the new furnace filter is installed correctly. Reading a house number when going to pay too much for ammo in a private party sale. The usual stuff.

Olight has an interesting niche in the flashlight market. They make good lights with plenty of aesthetic appeal. So they are part utility, and part fashion accessory. Somewhat ironically, they are popular for their anodized color options, yet their cool color temperature output costs them some sales. For the buyer that’s not overly concerned with CRI and quality of light, and instead cares about looks and output, they are a solid choice. I’ve been carrying my S1R II without issues since last year. And I expect that my experience with the Baton 3 would be the same. The charging case is just another bonus.

For camping, and/or emergency use, the Baton 3 Premium Edition is a winner. Keep the case topped up, and you’ve got enough recharges to provide light for days on end. Although Olight points out it provides up to 94 days on the “moonlight” setting, that’s not a realistic use for anything other than maybe reading under a blanket. Not that there is anything wrong with that. But on a camping trip, or extended power outage, expect well over 20 hours at 60 lumens, which is a good “task light” setting.

How to get yours at the best price

Olight sent this one for review, ahead of their release, and in advance of their sale this week. Because it was a review sample, I only get to try out the basic black. But they also offer them in red and blue. You can find the best price on the Baton 3 Premium Edition here. If you just want the Baton 3, that’s available here. 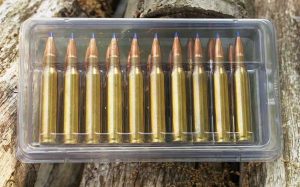