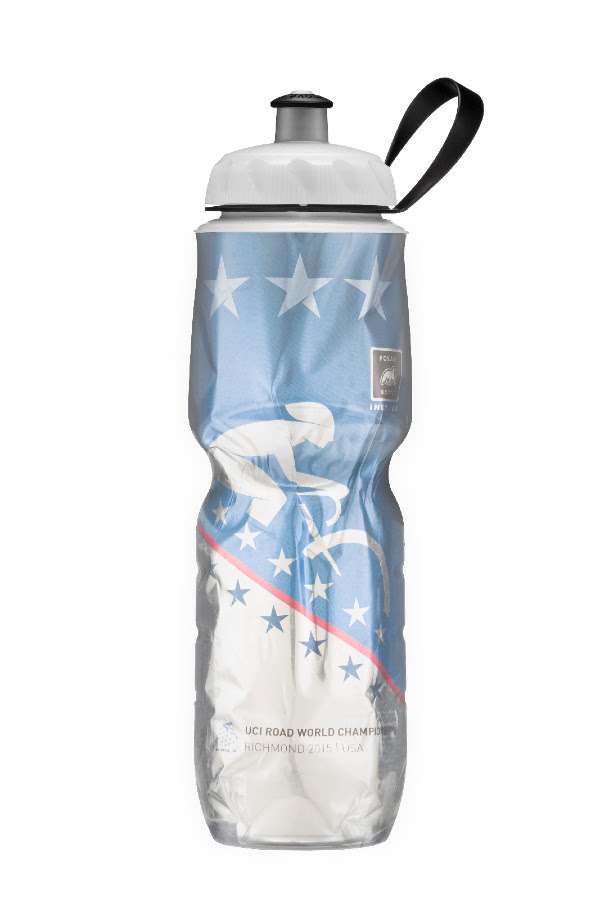 Polar Bottle, recently announced it is the Official Water Bottle of the 2015 UCI Road World Championships in Richmond, Virginia. The company has developed an eye-catching custom insulated water bottle featuring the 2015 UCI Road World Championships logo, with a touch of American flair.  This bottle can be purchased through Richmond 2015, Inc. and is also being made available by Polar Bottle to select retail and online partners.

2015 marks the return of the UCI World Road Championships to the United States, the first time since 1986. This year, the world rides in Richmond. Polar Bottle water bottles are a perfect fit for the UCI Road World Championships as they are the bottle of choice for elite as well as casual cyclists. The dual wall insulated bottle is a great way to battle the hot and humid conditions encountered during a Virginia summer. Team SmartStop athlete Eric Marcotte(Crit National Champ ’15, Road National Champ ’14, Worlds Team ’14) says “It is crucial to keep the body and core temperature cool. A critical part of helping me continue riding in hot conditions are Polar Bottle water bottles. They help keep the liquids that come in cold, which helps keep my core temperature down late into a ride. I’m very grateful to have them along for training and racing in the heat.”

These bottles are a great way for cycling fans to get into the spirit of the race, on or off the bike. Our made in USA water bottles are a favorite among cyclists across the US and in 49 other countries.

Polar Bottle has been developing and manufacturing insulated reusable water bottles for cyclists in Boulder, Colorado since 1994. Its insulated squeeze Sport bottles were originally purposely designed for bike use.  In addition to sponsoring the 2015 Richmond World Championships, Polar Bottle is an official water bottle licensee of the United States Olympic Committee and Team USA, the official water bottle of USA Pro Challenge and a sponsor of the Team SmartStop pro cycling team.  Its extensive range of Made in USA insulated water bottles retails at major general retailers, sporting goods stores and independent bike dealers – across the USA and in 49 countries worldwide.   The brand is also recognized for working with many cycling brands, teams and event organizers to create logo protected, custom insulated water bottle designs.

About the 2015 UCI Road World Championships

The UCI Road World Championships is a nine-day event, featuring 12 Championship races for Elite Men and Women, Under 23 Men, and Junior Men and Women. It is a rare opportunity for athletes to compete for their countries rather than their sponsors. At Worlds, each rider is racing for their country, wearing jerseys inspired by each countries flag. Worlds is truly one of the great global sporting events. It is covered by more than 500 media outlets from around the world and is broadcast live to a global audience of more than 300 million people.