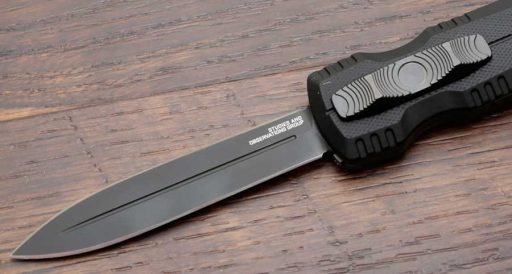 The Pentagon OTF from SOG is one of the most anticipated knives of the year. I first heard about it back in February, but didn’t get my hands on one until just a few weeks ago. SOG certainly took their time on this (I mean that in a good way), and for good reason. They could have just made another “out the front” automatic like every other one on the market. Instead, they chose to spend a lot of time developing it, including their Dynamic Locking System. Whether open or closed, the blade is very solidly locked in place. No rattles, not so much as a wiggle. Of course, it’s got a blade made from steel with a great pedigree too. And the blackout finish looks awesome. So was it worth the wait?

At 6.7 ounces, the Pentagon OTF isn’t exactly a lightweight. Of course, if you’re looking for a pro grade edged tool, weight probably isn’t your first concern. Overall length is about 5.25″ when closed, and once opened, 9.08″, of which 3.79″ is the blade. That blade’s got a durable black titanium nitride finish for long wear. It’s a mere 0.11″ thin, with a straight edge and spear point.

A generously sized OTF switch extends and retracts the blade. SOG’s Dynamic Locking System keeps it in place whether parked, or open for business. The handle itself is aluminum with a matte finish. I’d guess Type III Hardcoat, but it looks better than what I see on most firearms. On the back side of the handle is a small clip for point-down carry.

An American made steel developed by Crucible Industries, this high end blade is a great example of CPM technology. Crucible Particle Metal more evenly distributes the hard carbides within the metal. This results in a tough blade that is still relatively easy to machine, but resists chips in its final form. So the blade holds its edge well, although the trade-off is that sharpening requires more skill and effort. If you want a sharp blade that stands up to hard use over time, this is it.

At the $349.95 MSRP, most knife buyers are steel geeks, and know the composition already. For those that aren’t, the big deal is the N in the steel’s name. That represents the 0.5% Niobium. Its inclusion increases hardness, as well as wear and corrosion resistance.  This represents a small change over S30V, which was already a very well-respected premium steel. Oh, and Cryo refers to the cryogenic treatment (usually with liquid nitrogen) during the quench and temper process. If you’re getting the idea that this steel is high tech and labor intensive, you’re not wrong.

SOG gave the handle of the Pentagon OTF several different surface treatments. On both sides is some machining that looks like fine firearm checkering. Shallow cutouts on either side near the top allow for a solid grip when in use. Cuts on the front and back, combine with a series of raised bumps along the edges, continue that theme of good grip. The slightly tapered base gets the same treatment. Although there’s no doubt this is a fairly large and bulky knife, the beveled sides make it fit better in hand. Visually, they seem to make the Pentagon OTF appear smaller and less bulky too. Finally, the OTF switch is prominent, yet balanced for the size of the knife. Semi-circular cuts provide plenty of traction for bare or gloved hands.

While not my first automatic, this is my first OTF. I’ve handled many, and one thing that always disappointed me was the blade lockup. That’s not the case with the Pentagon OTF. I’ve already mentioned that it’s rattle-free in the closed position. When opened, there is no movement either. None. And by design, it should stay that tight even as internal parts wear a bit. The large button makes it easy to get it open, and easy to close. Either thumb it from the middle or the bottom of the button to open, the from the top or middle to close. It doesn’t take an unusual amount of force, but the blade’s not going anywhere by accident either.

I’ve only had it a few weeks, and cut everything I could get my hands on. That includes opening the multiple packages I receive each week, some of which had staples that the blade just shrugged off. And then slicing up the empty boxes. Lots of empty boxes. While cleaning my garage, I found some old rope, and sliced through that for fun. It cut right through the heavy plastic bands on my new steel targets. And it pried at least a dozen stuck empties out of my new rifle. That was a disappointment (the rifle, not the knife). It’s going to take a lot more than a couple of weeks to dull the Cryo CPM S35VN blade enough that it needs sharpening though. As I was writing this article, it still cut clean curls off a sheet of paper. The quality of the blade was never in question.

SOG fans with the budget for it will buy the Pentagon OTF. And for the most part, they won’t be disappointed. It’s priced well for the design features, and the blade steel. Collectors will enjoy it. It’s a legit tool for anyone that needs a “stabby, pokey, slicey”. As a knife, it’s effective for its intended use. I certainly look forward to carrying it more. If I have a complaint, it’s that the clip is parallel to the handle, where it should have a bit of a curve. Clipping it to my pocket takes a tiny bit more effort than it should. Other than that, no complaints.

One thing I do want to address is the opening mechanism. I’ve read other reviews where it has not deployed correctly 100% of the time. Two of my nephews experienced that. As much as I tried, I could not reproduce it. I have opened and closed it at every possible angle, until my thumb was sore, and it didn’t fail. Not sure what they did different, but I can’t repeat it. Perhaps they were a bit timid, and didn’t slide the button with authority? I just don’t know. If it does fail to open, holding the button up while flicking the knife will lock the blade in place. Should there be an actual issue, the Pentagon OTF is backed by SOG’s lifetime warranty. I don’t expect to need it.

So was it worth the wait? I think so. It’s going to be a while before I need to sharpen it, but I have an excellent sharpening system, and plenty of practice. If I manage to wear the Dynamic Locking System, I’ll report back on that too. For now, it’s been everything I’ve expected. SOG has a winner in the Pentagon OTF. Find it here. Note that this knife is not legal for sale in certain states. It’s the responsibility of the buyer to confirm legality before ordering.

Comments? Questions? Have any of our readers bought or at least checked out the Pentagon OTF? Feel free to share below.