Skip to content
Bike Utah and UTA Partner on Bicycle Friendly Driver Training for
All New Bus Operators
SALT LAKE CITY – June 7, 2017 – Bike Utah today announced the implementation of the Bicycle Friendly Driver Training program in partnership with Utah Transit Authority (UTA). As part of new bus operator training, new drivers will learn about common crashes and how to avoid them, the principles behind sharing the road with cyclists, the different types of bicycle infrastructure, and the safety techniques taught to bicyclists, including riding in the middle of the lane when it is safer to do so. The training will also review numerous roadway scenarios. 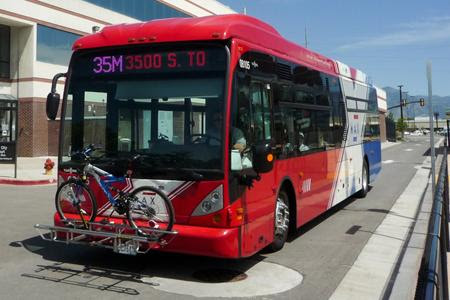 “Safety always is the number-one priority at UTA,” said UTA Bus Operations Training Supervisor, Maria Stahl. “Cyclists are a growing segment on our streets, whether they are riding their bikes to board TRAX, FrontRunner or one of our buses or just pedaling from one part of town to another, we must be aware they are there to ensure their safety, as well as our own.”
“UTA bus operators spend more time on the roadways than probably any other group of drivers in Utah,” said Phil Sarnoff, executive director of Bike Utah. “They are also more likely to interact with people on bicycles given the location of bike lanes and bus stops. The UTA staff members in charge of bus operator training were very receptive to the training program and we are thrilled it is being implemented so quickly.”
The Bicycle Friendly Driver Training program is modeled after a similar effort in Fort Collins, Colorado. Started in December 2015, has educated more than 2,000 drivers and worked with private citizens, businesses, schools, organizations, and municipalities to reach motorists. In addition, more than 100 people from communities across the nation and worldwide have modeled or are starting programs based on Fort Collins’ Bicycle Friendly Driver toolkit.
Bike Utah is working with UTA to expand training to existing UTA bus operators, state agencies, and businesses. They also plan to have an online training program available for the general public. Organizations and businesses interested in setting up their own training program can contact Bike Utah’s Executive Director, Phil Sarnoff, at phil@bikeutah.org.
Photo credit: UTA
# # #
About Bike Utah
Bike Utah is a statewide, nonprofit bicycle advocacy and education organization working to integrate bicycling into the everyday culture of Utahns. Through the organization’s school-based bicycle education program, 3,000 kids annually learn to ride safely on Utah’s streets. Bike Utah works with communities all across the state to develop active transportation plans and to implement infrastructure changes and designs that encourage bicycling and walking among both Utah residents and visitors. Through its Mobile Active Transportation Tours, Bike Utah educates elected officials, planners, and engineers, and tourism officials on the benefits of bicycles for recreation and as an alternative mode of transportation.