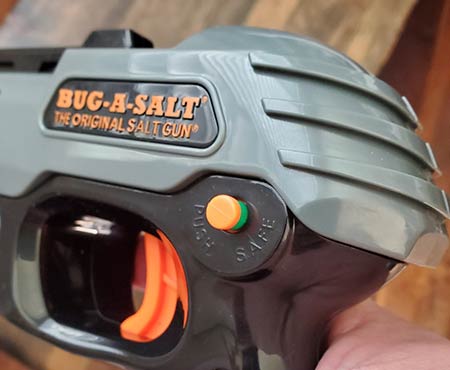 Recently, I took delivery of the Bug-A-Salt 3.0 Black Fly Edition. It’s described as “Specifically tailored to the needs of the more serious fly hunter.” Well, we have dogs and cats going in and out of our pet door all day long. Most of them are ours, and at least one belonged to a neighbor (yeah, that happened). With that going on, flies seemed to be sneaking in through the swinging flap. One or two wouldn’t be a problem, but this was more than one of two. And they were the kind that buzzed around family member’s faces constantly. Were. Because when the Bug-A-Salt 3.0 Black Fly Edition arrived, it wasn’t just delivery day according to FedEx. No, it was Judgment Day. And dead flies were stacking up.

What drew me to the Bug-A-Salt 3.0 was the updated feature list:

Marketing hype? Maybe. But it does look sleek, doesn’t it? The safety blocks the trigger in the “on” position. Those sights actually work too. Together, these improvements make a difference.

As I quickly learned, there is some prep work required before using the Bug-A-Salt 3.0 Black Fly Edition. And I’m not just talking about loading some salt in the hopper. First, clear tables and counters of any food, or open beverages. If you don’t want a dead fly (or salt) in it, put it away, at least temporarily. For sustained engagements, it may be advisable to get your significant other a comfy pair of house slippers. Finally, one of those robot vacuums that runs into furniture and gets stuck under the recliner is an expensive, but worthwhile accessory. Keep reading, it will make sense.

Okay, the area’s been prepared for fly eradication. I asked my wife if we had any tactical salt. Apparently, that’s not a thing. Although Bug-A-Salt does offer their “High Performance Salt”. I shouldn’t put it in quotes, as it is a real thing. Anyway, I lifted the lid on the hopper, and poured in some table salt. Per the spec sheet, a full hopper is good for about 80 shots. That’s a week or two for me, maybe 15-20 minutes if you can’t be bothered to fix your torn or broken screens.

Once it’s loaded, just rack the slide to charge it, which is indicated by the rear sight popping. Surprisingly, the flies didn’t immediately scatter. Which is not what Hollywood has taught us. Good thing though, as I wanted to get my money’s worth. Now, I didn’t get the fancy laser-equipped Bug-A-Salt, so I just lined up my shot and knocked a fly off the ceiling. Rack again, take one off the island lighting. Another rack, and there’s one off the trash-can lid. Working that slide as I circled the island, I cleared the entire kitchen. A few more, and I stopped for a break. Body count was at six. Maybe more, I’m not sure where their little corpses ended up.

The downside to my success

While I was proud to rid our kitchen of the first half-dozen or so flies, my wife was unimpressed. “Why do I feel like there is salt all over the floor?” was the first thing she asked. Slippers would have helped right then. I told her I killed all the flies. Still not impressed. “Where are they, and how are they going to get cleaned up?” were her next questions. I tried to point out that the $400 circular robot that the cat has never once ridden would take care of them. Heck, it should clean up the salt too. Thankfully, she is very tolerant. I made my own dinner that night.

Honestly, I was not able to locate all the fly corpses. Note that there is a certain effective range. Too close, and they just splatter. A bit too far, and they fall, but don’t die right away. Luckily, one of our cats took on the role of quality assurance officer. She located the injured flies and finished them off. Just not too rapidly.

I do love the accessory line. There’s the Bug-Beam laser adapter. Batteries are included, beer is not. It’s easy to see where their line of thinking is. While Bug-A-Salt offers actual BBQ tools, their main product counts as one too. In addition, they have plenty of Buddy Deals (two-packs) as well as hats, shirts, beanies and beer koozies. And the salt! High Performance Salt – ammo you can eat. Even garden gnomes. Yes, this is a company that doesn’t take itself too seriously. Although if you want to, you can read some disheartening fly facts here.

As I mentioned already (and as the Bug-A-Salt site makes very clear), this is not a toy. Well, at least not for children. I’m a grown child, and certainly enjoy dispatching nasty flies with it. Are there more effective ways to get rid of flies? Maybe. Although fly strips and traps are not exactly classy. The Bug-A-Salt 3.0 Black Fly Edition is primarily a neutral grey, and should go well with most modern decor. Mimicking the latest decorating trend, it’s got bright pops of color too. They’re at the important points – barrel tip, trigger, and safety. For true fashionistas, check out the full collection.

Whether you live in a trailer parked at the beach, or a mansion in the hills, flies are never welcome. This is an environmentally-sound approach to reducing their numbers. Check them out at Bugasalt.com.