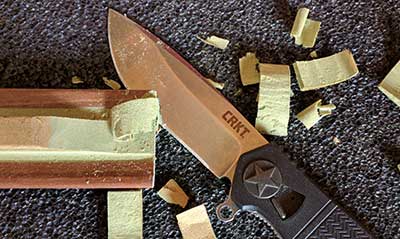 The Homefront EDC from Columbia River Knife & Tool is new and innovative. This Ken Onion design features their “Field Strip” technology, which allows you to take apart your knife without any tools. If you’re not a fan of fixed blades (or even if you are), but like your knife clean, it might be for you. Mud, dirt, food, blood, whatever. The Homefront EDC shrugs it off.

There are a few different Homefront models, but I chose the EDC for this review. That’s because it’s designed for every day carry and use. And while I have plenty of pocket knives, they all seem to have different features that set them apart from each other. This Homefront sports a 3.53″ stonewash finished 1.4116 steel blade. The handles are black glass-reinforced nylon. Its non-movable clip allows for deep carry, tip-up. Best of all, the knife doesn’t scream “tactical”, making it (sort of) office-approved. But let’s face it – this is for all those chores outside of work.

Before I get to the considerable beating and abuse I gave this knife, let me explain the Field Strip feature. That little lever in the handle is half of the takedown process. Flick it over, then use your thumb to roll the wheel on the end of the handle. Doing this unscrews the handle halves, allowing you to easily clean the blade, and the insides of the knife. It takes longer to read this than it does to just take it apart. Reverse the process to assemble. It’s really that simple.

Timing is everything, and the Homefront arrived just in time to get put to work. We’ve been remodeling our house for over three years, and finally decided to sell it. So I’ve had to finish all those big and little projects that never seem to get done. Most of it was not so kind to the Homefront. Cutting plastic straps off a bundle of boxes, and slicing some tape, that was easy. Using it to hack some rosebushes back a bit, not as nice. Thinning out some flooring transitions was easy on me, rough on the blade. Recycling old boxes takes the edge off most blades, and it saw plenty of that. Scraping dried paint and caulk off tiles? Yeah, that happened too. At that point, it was as dull as high school math. Luckily, it’s easy enough to get a decent edge back.

Durable and comfortable, I never lost my grip while using it. When I did drop it, it was because I’m sometimes clumsy. Can’t blame the knife for that. Opening it does take a bit more snap than I would like, but only because it’s not very discrete. And the liner lock keeps it open until the job is done. At 4.3 ounces, it does have enough weight for light chopping. Plus the hollow ground blade makes slicing easy too, when properly sharpened.

You probably take better care of your knives, but when I do a review, I aim for the worst case scenario. Cutting fruit and meat, plus scraping that stuff around the base of the toilet, is not for the same knife. Unless you do it in the proper order. And give it a thorough cleaning. Which is where the Homefront shines. It survived plenty of tasks around the house, and I think it would make a great camp knife too. My only complaint is that the blade has a bit of play, but that also means it will work when full of dirt and grit. And don’t let the MSRP of $99.99 scare you off. I’ve seen it online for much less. Check out the CRKT website for the rest of the Homefront line.

I’ve like to thank Columbia River Knife & Tool for allowing me to use and abuse their Homefront EDC Knife. I’m pretty sure it will come in handy not just around the house, but on plenty of outdoor adventures.