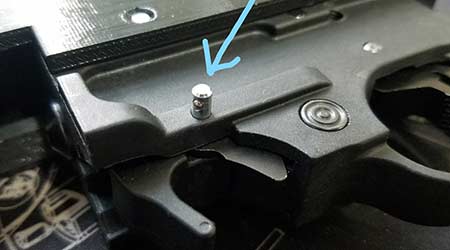 I don’t expect everyone to appreciate the magazine release KrossPins from TandemKross. But if you’ve got a trigger group where the pins fall out, they are the best $4.99 you can spend on your 10/22 variant. I was a fan of their receiver KrossPins, since many times the factory ones were either too tight (difficult to remove), or they just fell right out. Now they have these smaller pins, and they’re just gold for some of my projects.

What the heck is this magic you speak of?

Known as part B-35 (magazine latch pivot & ejector pin) to those that have had to call Ruger for a replacement, these are two of the pins in the trigger group. The upper one goes through the ejector. And the bolt lock spring puts just enough tension on it to keep it in place. Usually. But the lower one, which goes through the magazine latch and bolt lock, is held in by luck. And hope. When the trigger group is in a stock or chassis, it’s not a problem. When out of the stock or chassis, these little pins sometimes fall out and roll away.

Enter the Magazine Release KrossPins. Measuring the same length, and 0.125″ in diameter, they are a direct replacement for the factory pin. Except they have a tiny spring-loaded ball detent in one end. This serves an immediately obvious purpose. They don’t fall out of the trigger group. As a secondary bonus, they don’t roll very well. Which makes them less likely to roll away when they are taken out.

How difficult is installation?

As the old saying goes, if you can dodge a wrench, you can dodge a ball. If you can push a pin, you can replace a pin. If the original one isn’t missing, just push it out with the new pin. Otherwise, it installs just like the factory pin. I like to go through from the magazine latch side, with the detent end going in last. It’s much easier to line things up that way. Just like in the photo below, from the TandemKross website. Of course, before starting, make sure your firearm is unloaded. Check it twice.

Is it really magical? No. But I’ve got 8 different 10/22 variants, and I am always swapping parts around. So I got tired of having that pin fall out onto my Tekmat, where it didn’t even make a sound. Of all the trigger groups I have, only two were actually a problem. While the pins are sold in pairs, I really only found a need to replace the lower pin. So I fixed two trigger groups with a single set of pins. If fixing two 10/22s for $5 isn’t magic, then I don’t know what is.

If you have read many articles on this site, you probably know the format. I usually explain a product, cover the installation, and then go into how it works in actual use. But this is a pin. Its job is to hold something in place, and not move. And not fall out. I’m happy to report that they don’t fall out. But they are easy enough to push out. When it comes to their performance, I am 100% satisfied.

My very first 10/22, 30+ years ago, didn’t get modified at all. I don’t think I bought a scope, or even extra magazines. Many years later, in what I like to think of as my second stage of 10/22 ownership, I had a “custom rifle”. I had added a Fajen thumbhole stock and a heavy barrel. It was topped off with a 3-9×40 scope. Inside, it had the auto bolt release, an aftermarket buffer, and an extended magazine release. Yeah, that seemed like a big deal back then. Now, it’s rare that any part goes untouched. But TandemKross is always there to remind me that it’s not necessary to spend a lot to make good guns great. Whether a totally stock rifle, or full custom, simple parts like their KrossPins eliminate small issues, and really do improve on an already great design. Check them out, and all the other great parts, at TandemKross.com.

I’d like to extend a sincere thank you to TandemKross for providing these parts for my testing and evaluation, as well as their continued support of recreational and competition shooters.

Comments? Questions? Have any of our readers tried out either of the KrossPins? Feel free to share below.