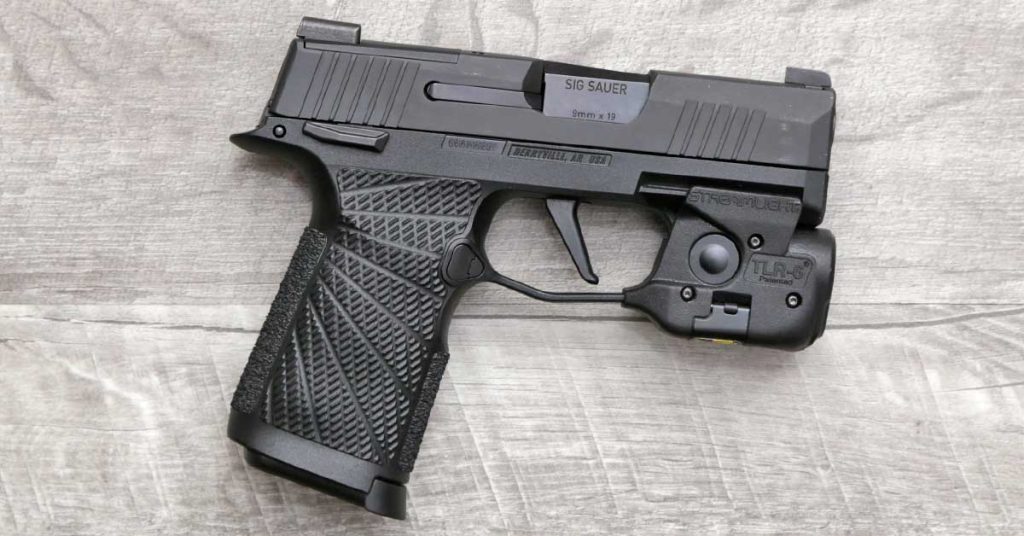 Upgrading the Sig P365x with a MagGuts conversion was an easy decision to make. It’s been nothing but reliable in my Shield over nearly five years, making it a welcome upgrade for other pistols now.  Back then, little single stacks were the hot ticket, but limited to 7-8 rounds from the factory. This time, I’m swapping some MagGuts into the Sig P365X (or XL) magazines. As delivered, this pistol holds 12+1 rounds of 9mm. Going to bump that up to a capacity of 14 rounds. That’s double the capacity of my original Shield, without much difference in overall size.

The conversion kit hasn’t really changed much over the years, although it’s a bit different for the Sig. It includes a newly designed follower, a ZeeSpring™, and a replacement baseplate. Key to how the system works is the follower and baseplate interfacing with the flat ZeeSpring™. Where the Sig magazine spring is about 4.25″ long, the MagGuts spring is nearly 6.5″ long. It just compresses more, but into roughly the same space. That includes under the follower, and at the other end, where the spring nests lower in the baseplate.

On the two-piece OEM baseplate, there is a raised section for the spring to sit in. So removing that, adding a tiny bit of length, and using the flat spring makes room for two extra rounds. No change in function, still easy to load, and requires no modification to the magazine body. Basically, everything you could ask for. Which makes the price of $33.95 a really good deal, as far as I am concerned. For a non-competition pistol, a nearly flush +2 is much nicer than a huge +5 sticking out of the grip.

It should be pretty common knowledge at this point that if you know how to service your mags, you can easily upgrade them. One warning that I cannot repeat enough is to wear eye protection. Magazines have springs, and I’ve had enough close calls that I just make it a habit of protecting my eyes. Begin by disassembling the OEM magazine. Press the button in the center of the factory baseplate, and then slide it off. Set the spring, follower, and baseplate aside. I usually store them in the package the MagGuts come in.

Pay attention to the follower spring as you install it, making sure that the magazine spring is positioned properly. MagGuts includes really good instructions, with illustrations showing the correct way. If it’s done correctly, just compress the spring and then slide the new base on. Verify that the brass button from the bottom of the spring is firmly seated in the base. At this point, install three rounds, and peek through the magazine catch slot to make sure the springs are interfacing correctly. Once that’s confirmed, load it all the way up, and make sure there is a tiny bit (1/8″) of give. So easy, even I could do it. It took two tries.

For reasons I won’t go into, I didn’t use these magazines in the pistol pictured. Instead, there were used in a borrowed Sig P365X. Naturally, they worked without a hitch. Loaded as normal, fed as usual, and the slide locked open on the last round. While I would like to say that it didn’t matter if it was cheap ammo or not, that requires a bit of clarification. No ammo is cheap these days. But Sellier & Bellot, Browning, Magtech, and Remington all worked just fine. This doesn’t surprise me at all, as the MagGuts website has over 1,000 reviews for this kit, and they are all pretty positive.

As far as size, that’s a non-issue. It’s not going to affect your grip, nor will it matter to your holster. While the factory magazine sits pretty much flush, these are ever so slightly longer. If anything, they may be a little easier to send home with your palm, because they stand a little proud, rather than flush. Well worth that for the extra two rounds. In the photo below, you can see that they work just fine in the Wilson Combat grip module too.

First, I need to point out that it’s pretty impressive to see so many high capacity compact pistols these days. And at affordable price points. If more rounds matters, there are plenty of options. And MagGuts has a kit for most popular pistols. While this Sig P365X might be a home defense or carry pistol, rather than a competition pistol, two extra rounds are always welcome. Better to have them and not need them, than need them and not have them. It’s also worth noting that the baseplate adds only a tiny amount to the overall length. Certainly not enough to make a difference to me.

When I last reviewed a MagGuts product, they offered options for 7 different brands. That’s now up to ten. These include Colt, Kel-Tec, Kahr, Kimber, Glock, Ruger, Sig Sauer, Smith & Wesson, Springfield, and Walther. They’ve also got some cool hats with their logo. And if you’re shopping for someone else, they’ve got gift cards too, which makes that easy. So if you are looking for more capacity without a big extension, check out MagGuts.com.

I’d like to thank MagGuts for providing their magazine conversion kit for this review. Their innovation benefits competition shooters, and those exercising their 2nd amendment right to protect themselves.