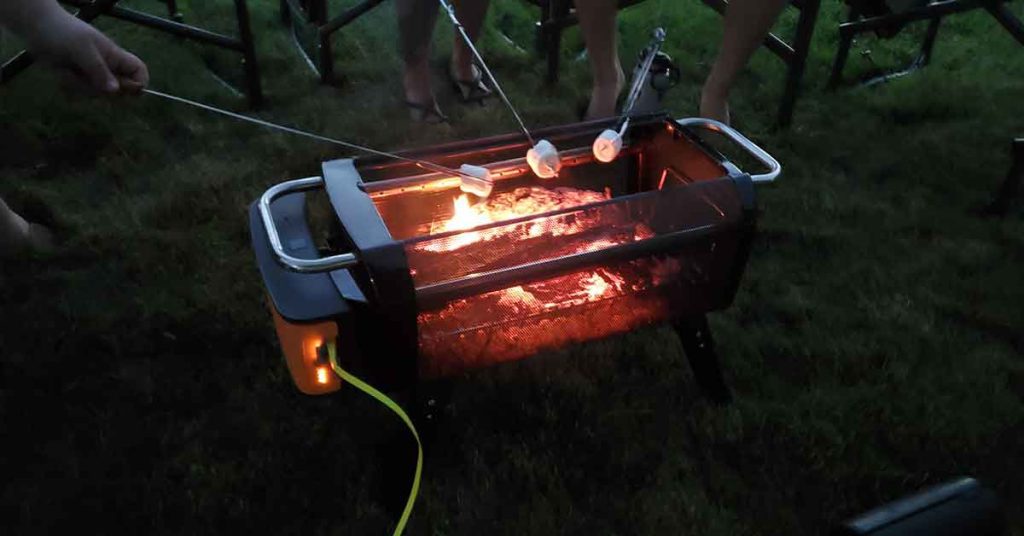 Over the past few months, we’ve been testing out the FirePit+, which is a highly portable wood and charcoal-burning fire pit from BioLite. Yes, you can take it just about anywhere. Or use it right in your yard. And it’s great for putting out heat, or cooking anything from hot dogs and burgers to roasted veggies. And then toast marshmallows for dessert. Or just watch the flames dance while the pit provides some heat. We used it mostly for s’mores during the peak of summer, and look forward to using it as a fire pit now that it’s cooled off a bit. Because the FirePit+ has an extra trick up its sleeve worth discussing. It’s smoke-free, making it a very attractive option for small patios and wide open spaces.

This is a portable firepit and grill that burns either wood or charcoal. It’s got a metal frame with X-Ray mesh body. This fine mesh keeps the fire in, but lets users enjoy the heat radiating out, instead of just up. At one end is a familiar-looking BioLite battery pack, although it doesn’t get charged by the fire. Instead, it’s part of the “magic” that makes this a smokeless fire pit. It’s got an internal fan that blows air through 51 jets to create a very efficient fire. So efficient, there’s no smoke.

Being dual purpose, the firepit’s fuel rack can be raised up, and instead of logs, load it with charcoal for grilling a meal. There’s an included grill grate that holds enough food for 2-4 people, depending on what you’re cooking. Heat and flame size can be managed via the fan speed. For tech geeks, there’s even a free app for that. While most of us probably prefer not to use our phones when we’re chilling outdoors, it can charge one, or other USB devices. More specifically, your Bluetooth speaker that’s playing those relaxing tunes as you enjoy some quality time outdoors. Or just enjoy the crackle of the fire.

At 27 inches long, 13 inches wide, and 15.8 inches high, you might expect the $299.95 FirePit+ to weigh more than 19.8 pounds. Especially since it’s predominantly steel with a high-temp enamel finish for durability. But it’s mostly mesh and magic, with a little more metal at each end, plus the battery pack. That battery pack houses a 12,800 mAh battery, which is like a stack of iPhone batteries, although much less expensive. Run times for the FirePit+ on a full battery will vary from 30 hours on low, 14 on medium, to 7 on high. Depending on how much it’s used, that should at least cover a long weekend.

Tucked underneath the FirePit+ are four handy legs that swing out and lock into place. For being a relatively simple design, they provide several benefits. By getting the FirePit+ up off the ground, they create a more fire-safe environment. That extra height also allows for more airflow, improving combustion efficiency. At the same time, heat can radiate more freely. And a raised-up fire is a little easier to work with, whether cooking a meal, or just making s’mores. When storing or transporting the FirePit+, just fold them back up and out of the way.

Like any good grilling tool, there are plenty of accessories. Do you like eggs, bacon, pancakes, or fajitas? Get the griddle. Going for an even, hotter cook? Put a lid on it! There’s also a Prep & Grill Toolkit, along with a FirePoker. Worried about the ground underneath your FirePit? Get the FireMat. And of course, the most professional accessory of all, the carry bag. In addition to the Firepit+ by itself, there’s also a $399 Essentials Kit, which includes the FirePit+, FireMat, FirePoker, and Carry Bag.

For shipping, the FirePit+ is not fully assembled. You’ll need to know your way around a screwdriver to get it together. Before you start the assembly, grab the battery, and throw it on the charger. Because no matter who delivers it, they’ve specified that the battery can’t be more than 50% charged. So get that going first. Then follow the simple directions, twist a few screws to install the handles, and read the full manual while the battery charges. Also, wash the grill if you’re planning on cooking on it.

Despite the fancy jets, you can’t just throw a log in it and get a blazing fire going. Nor can you dump charcoal right in and expect to have coals in a few minutes. First, unfold the legs, and make sure it’s on level ground, away from combustibles or flammables. Start with some biomass like smaller twigs and branches, and once you have a decent little fire, then add a log. Note that standard firewood bought from the gas station or a campsite store will work just fine. But look for slimmer pieces, as the FirePit+ is only a little over a foot across. So thick logs may not play well. As your fire gets going, vary the fan speed for max heat or the long burn. As mentioned, the battery is expected to last from seven to 30 hours, depending on how high you turn up the fan.

Heat, but no smoke

We purposely kept the fire on the smaller side, due to the high ambient temperatures during most of the review period. That allowed us to get in a little closer than a normal fire would. What really made the difference though, was the lack of smoke. Usually, you need to hang back from the fire, sometimes out of the actual heat zone, due to smoke. Not here. Front row seats for everyone, no smoke in your eyes. Although it does leave clothing with that satisfying campfire scent. Throw an extra log on during the chilly season, and it will warm you right up.

Thanks to an adjustable grate, it’s easy to switch from fire pit to cooking, and back. Ideally, I would add the griddle, and cook all my camp meals on it. Eggs in the morning, maybe some chicken and veggies (camp fajitas!) for lunch, and then something lighter for dinner. Between the grate and the griddle, you’ve got plenty of cooking options. Or get that lid and slow cook some potatoes and vegetables for a classic roast dinner. I think that BioLite should have included some sort of hook to make it easier to lift or lower the grate, but we whipped one up out of an old coat hanger.

What we used it for

During our review period, we experienced a variety of weather. That included sweltering 90+ degrees, monsoon season rains, and finally, cooler temps in the 70s. As much as we would have liked to use it every day, the heat and rain made that somewhat limited. There were multiple family s’more nights, and some weenie roasts too. Now that we’re into the cooler weather, it will be used more regularly. Since I mentioned family gatherings, I should point out that for a fire pit, it’s relatively safe. The X-Ray mesh body gets hot, but not lava hot. I brushed my hand against it a few times with a medium fire, and didn’t get burned. So it’s not going to sear skin on contact. You still need to be careful around it, but it seems marginally safer than some other fire options.

Our SUV is kind of on the smaller side, at least when it comes to what we can pack into it. We found that it was easy enough to stuff some wood into the FirePit+, and a few more smaller logs on top, before wrapping it up in the carry bag. Note that the carry bag is quite durable, with tall sides which will contain any ash you didn’t completely clean out. And it has cleverly adjustable flaps that will accommodate the optional lid, or even just a stack of firewood on top. That puts our heat and fire in one handy package that takes up a relatively small amount of space, for what it provides in return. Whether taking it to a campsite or just across town to chill with some friends, it’s convenient and portable.

Let’s wrap this up

When I first unboxed the FirePit+ with an outdoors journalist friend, we were momentarily unsure what to think. But the first time we fired it up, we were both sold on the design. It’s nicely contained, and the X-Ray mesh keeps things tidy while providing a really nice effect. It blacks out everything but the flames. If you want to be mesmerized by a campfire without the smoke, this is the way. It’s certainly been a hit with my family. For more info check out the BioLiteEnergy.com website.

I’d like to thank BioLite for providing their FirePit+ for this review. We’ve enjoyed our time with it and we’re slightly sad to hand it off to another outdoor gear reviewer, but expect to see it again soon.