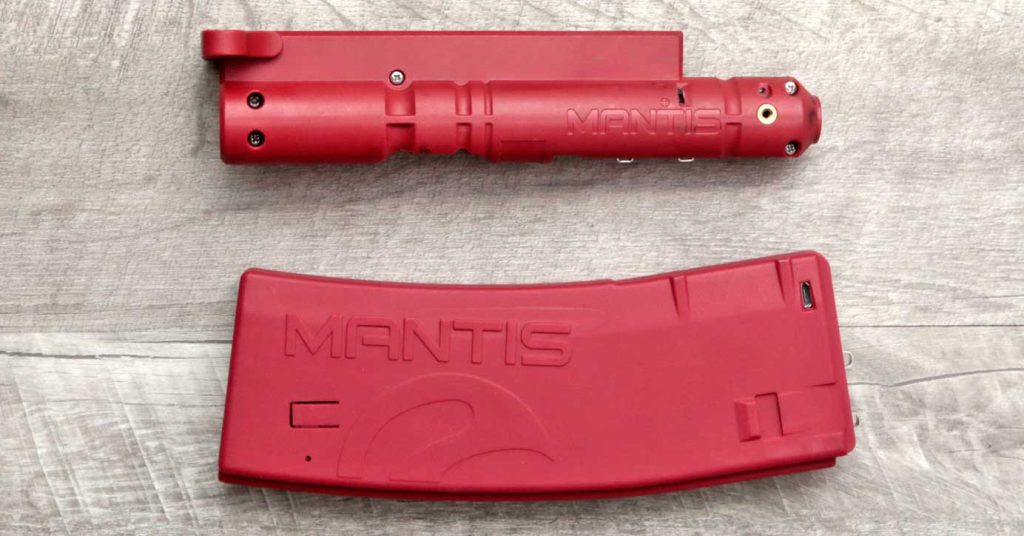 Mantis is shipping their new Blackbeard X starting today. This is an update to their Blackbeard auto-resetting trigger dry-fire trainer for the AR-15 platform. It offers both auto-resetting of the trigger, and the feedback of the Mantis X system. So without any modifications to your MSR, you can run different dry-fire drills and build muscle memory without burning up your expensive ammo. It’s pretty much the best of all worlds, and I’ve had a few days to try it out prior to the official launch.

First, the Blackbeard X isn’t some drop-in trigger kit. And there are no permanent modifications to your firearm. It uses your current trigger, grip, stock, sights, optics, and everything else. Except for the charging handle and bolt carrier group. Because it replaces them with a single drop-in piece. And it’s that piece that resets the trigger after each pull, up to ten times per second. Housed inside this unit is the laser that’s used for tracking “hits” on your target. All this is powered by a battery shaped like a magazine, which conveniently slides up inside the magwell. If it sounds complex, keep in mind that the user side is as simple as possible. This is technology made easy. It’s even got Bluetooth to connect to an app on a phone or tablet, which is where the fun really starts.

With the Blackbeard X in place, you can run through all sorts of dry-fire drills. Its trigger resets as fast as you can pull it, and there is a brief green laser burst for visual feedback. Each shot’s information is recorded, providing a comprehensive evaluation that includes split times and accuracy scores.

The Blackbeard X comes in a handy storage case with a USB charging cable. As always, it’s best to charge it before use. From there, it’s pretty much the same as a BCG/charging handle swap, and loading a magazine. With the firearm unloaded and the magazine removed, verify that the chamber is indeed empty. Push the rear pin out and tip the upper so the barrel is pointed down. Remove the BCG and charging handle. Then drop the Blackbeard X back in their place. Lock it back up, and load the battery into the magazine well. At this point, pull the trigger a few times to see if the laser’s zero is set to match your optic. If not, there is a tiny switch on the side, accessed via the ejection port. Sliding it down turns on the laser, which can then be adjusted by two equally tiny hex screws in the body.

Installation into my old Rock River, and a quick zero took me all of about five minutes.

Before I get into some of the drills, it may be helpful to explain how the Mantis system works. It’s constantly measuring motion, which can be viewed in the app. As the trigger is pulled, it measures any and all movement. This is done by recording where the muzzle is pointed as the trigger breaks, compared to where it was pointed when the trigger was pulled, starting at 200 milliseconds prior to the trigger break. If you’ve got too much or too little finger on the trigger or some other bad form, it will identify that and suggest a correction. As soon as I figured out that it could detect bad habits (during my Mantis X10 Elite review), I intentionally did a few things wrong.

With the Blackbeard X, I found that it called me out a few times as well. I got a Support Hand Pulling while running drills for my screenshots. So it’s important to not just look at the score, but also check the feedback and consider making improvements. Obviously, the more you practice, the more feedback it gives, leading to improvement over time. Since even the most basic drill provides a score, every trigger press will help you improve your scores, and therefore your skills.

If you already have the app, this should be familiar. If not, download it and create your account, then log in. Next, find the Bluetooth button on the side of the battery, and hold it down to connect to the app. Doing so unlocks some new features. There’s a warning in the app reminding you to double-check and verify that your firearm is unloaded. You can’t continue until you click “Confirmed”. Oh, it automatically identified that I was shooting a rifle too, but that can be selected in the settings if you also have a Mantis X for handgun use. In addition, there is a calibration process, which just requires laying the firearm on a solid surface while the accelerometer calibrates. Mantis developers haven’t forgotten about lefties, so there’s a setting to specify right or left-handed shooting too.

Practice and Training with the Blackbeard X

In order to meet my deadline, I didn’t have time to thoroughly run through all the features. Here’s a list of them, some of which include additional settings.

BBX Dynamic, Transitions, and Plate. These are all shooting scenarios where the goal is to engage multiple targets. Scoring feedback includes accuracy scores as well as split times. Open Training is not timed, and just measures accuracy while giving feedback if it detects any low scores due to poor form. Shot Timer is timed, where you fire any amount of shots once the buzzer goes off, then review the scores and split times. Par Timer allows you to select a time, then see how many shots you can take, which are scored. Splits are provided as well, along with data on any shots outside the Par time.

MantisX Benchmark is ten shots, untimed, where the goal is precision. Timed Benchmark is similar, but against the clock. Compressed Surprise Break is speed to trigger pull. Starting with the rifle on target, fire each time the buzzer goes off. Secondary as Primary is a drill using your support hand in place of primary. For this one, you don’t shoot against a timer, but it measures accuracy and displays split times. Kneeling involves ten shots from a kneeling position. From there, there are reload drills, cadence drills, Hostage Rescue Drills, and USMC Qualification. Finally, there are Basic Rifleman and Advanced Rifleman courses. No matter how you practice, it’s all saved in the History, for easy review later.

Who’s going to be disappointed?

If you have a Fostech Echo 2 trigger, or a Springfield SAINT Victor rifle, I’ve got bad news. Not compatible. And if you have a sear block, that’s a no-go as well. For those that built up an 80% lower, compatibility cannot be guaranteed. Yes, it should work. But due to variances, Mantis can’t guarantee it will.

As mentioned, this isn’t my first time using the Mantis system, and it was very different from using it with my pistol. I can train with hundreds of rounds every weekend using rimfire pistols, most of which transfers over to 9mm. But there is no substitute for practicing with my actual rifle, using its trigger, and my optic of choice. The auto-resetting trigger, combined with the Mantis feedback, is invaluable. I can literally have thousands of rounds of practice with the Blackbeard X system, supplemented by a couple of boxes of live firing. Doing so builds muscle memory while the feedback helps me break any bad habits. So those few boxes of ammo are for confirming the progress made at home.

Trigger time with the Blackbeard X system quickly pays for itself. The MSRP is currently $219, which would be two range trips for me.  While I could just dry fire, that alone is of only limited value. For me, the feedback really makes this system a worthwhile investment. It doesn’t hurt that the app turns practice into something of a game. Saving your old targets and comparing them isn’t the same, but the History feature on the app makes that really easy. Measuring and recording progress is invaluable. Reviewing it over dinner so I can plan my evening drills is priceless. My handgun shooting improved with the Mantis system, and I expect my rifle shooting skills to do the same. Once I knock some of the rust off, as I haven’t shot as much as I would have liked. With winter just around the corner, I plan on getting back up to speed even as I’m stuck in the house. Working from home means I can get some practice in on my lunch break. If that sounds good to you too, check out the Blackbeard X at Mantisx.com.

I’d like to thank Mantis for providing their Blackbeard X system a few days ahead of its release so that I could be one of the first to try out this awesome technology.

Comments? Questions? Have any of our readers tried any of the Mantis X products? Feel free to share below.