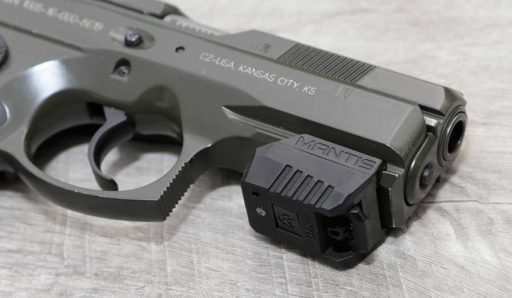 With ammo availability and pricing being what it is lately, I didn’t hesitate when Mantis offered a chance to review their X10 Elite Shooting Performance System. This $249.99 system promises to help shooters master critical fundamental skills and improve accuracy. Two years ago, I would have suggested spending that money on ammo and maybe some training instead. But after a couple of months with the Mantis X10 Elite, it seems like a relative bargain. That’s because Mantis has combined hardware and software into a very smart package. Whether dry firing or live fire, it provides real time feedback and analysis. This allows shooters to hone their skills at home, dry firing, before going to the range and testing what they’ve learned. It’s a powerful tool, and the more I used it, the more I appreciated the technology behind it.

The backbone of the system is their X10 module. It looks like a tiny Picatinny mount light or laser. Compared to their older models, it’s 40% smaller, weighs half as much, offers 3x the battery life, and 4x the data rate. It charges via a USB port (cable included), and the default mount is a spring-loaded quick release system. My Elite kit included an adapter to mount it to a magazine baseplate, as well as a mount for rifles and shotguns. Mantis also offers dozens of magazine baseplate adapters for specific pistols. Basically, if it goes bang, you can probably mount the X10 to it.

Inside the X10 is the battery and charging circuitry, obviously. There is also a multi-axis accelerometer, much like our phones have. This is the part that senses motion, and it’s really the basis for the magic that happens when using the Mantis X10. Because it can measure how steady you hold your firearm, and then what happens when you pull the trigger. And it works equally well with dry firing or live ammo. But more on that below.

Available as a download, the Mantis software is so comprehensive, two months was not enough time to go through all the options. There are daily challenges as well as standard drills and courses. Examples of drills include a shot timer, Mantis X benchmark, timed benchmark, compressed surprise break, primary/support hand only drills, and reload, cadence, and hostage rescue drills. Courses include Mantis X introduction, Basic, Advance, and Elite marksmanship, as well as Basic and Advanced combat. That’s not just a marketing thing either, the Mantis X system is used by all branches of the Armed Forces. Because it works.

As always, the module should be fully charged before use. After verifying that my CZ 75 P-01 was unloaded, I mounted it on the railed dust cover. With a Snap Cap in the chamber, it was ready to go. A single button on the bottom of the Mantis X10 Elite turns it on and off, activating the Bluetooth connection. I opened the app, which I had already signed in to, and connected it to the X10. There is a quick calibration that requires you to set the firearm on a flat surface. Note that there are settings for left or right hand shooters, live or dry firing, handgun or long gun, and also the mount location. Once that is out of the way, it’s just a matter of choosing which skill to work on.

Before I get into some of the drills, it may be helpful to explain how the Mantis X10 Elite works. It’s constantly measuring motion – this can even be viewed in the app. As the trigger is pulled, it measures the tiniest changes at the muzzle. Too much or too little finger on the trigger? It will identify that, and suggest a correction. Once I figured out that it could detect bad habits, I intentionally did a few things wrong. Sure enough, I got a “Breaking Wrist Down” when I relaxed my wrists too much. Then I gave it a death grip, and was able to get it to suggest that my grip was too tight. Continuing with bad form, it kept presenting suggestions.

In addition, it’s going to measure where the muzzle is pointed as the trigger breaks, compared to where it was pointed as the trigger is pulled. When doing the courses, the app displays the movement starting at 200 milliseconds prior to the trigger break. I found this to be more accurate in dry fire than live, but not for the reasons which might be expected. Either way, the more you practice, the more feedback it gives. Over time, this leads to improvement. Even the most basic drill provides a score. And being more mindful of grip, breathing, and trigger press will improve that score.

For this drill, the goal is precision marksmanship. So it’s a simple, un-timed drill. Point at your target, and (dry) fire as many times as you want. I was doing this in ten shot groups. My first one, I deliberately had too much finger on the trigger. And although my score was in the 80s, the software pointed out my poor form. For the next round, I made sure to pay more attention to finger placement. Sure enough, my score was over 90. This can be done with live fire too, and the Mantis software should show you via the trace where your muzzle went if/when you were off target. Variations of this drill include Primary Hand Only and Support Hand Only.

It’s easy enough to pull the trigger quickly, but harder to maintain accuracy. So the Shot Timer is almost the opposite of Open Training. Any number of shots, at any pace. The time between shots is displayed, along with the accuracy score. As the interval between shots got shorter, my score got correspondingly lower. Clearly, this is something I need to work on.

This drill is probably more for competition than defensive skills. Start with your firearm on target, and fire as soon as the buzzer goes off. It’s measuring reaction time and accuracy. Note that the delay can be varied in the Settings.

One of my favorites, this drill is timed. When the buzzer goes off, draw and fire a single shot. Works best with a hostage target, but even a Post-it note will serve as the bad guy. In order to “save the hostage”, a score of 85 or higher is required. There are three settings – Basic, Intermediate, and Advanced. The difference is the time required to be successful, in addition to the score of 85. For Basic, it’s only 4 seconds, dropping to 1.7 for Advanced. This is one of the better skill builders, as it requires drawing from the holster.

That’s just some of my favorite drills. There’s also a Holster Draw Analysis, Recoilmeter, Cadence drills, and more. The Daily Challenge drills are interesting surprises. One was a “soapy hands” drill. Get your hands all soaped up and slippery, and (dry) fire ten shots. Another was the Dark Mode. For this one, the practice room should be as dark as possible. And then ten shots are fired at the sound of the buzzer using a hand-held or weapon-mounted light. It may sound gimmicky, but these are practical defensive drills that most people might not otherwise think of. Except for that one dude with the holster in his shower.

There are six courses to work through. First is the Mantis X Introduction, followed by Basic, Advanced, and Elite Marksmanship. Those are your general courses, which are great for honing skills for competition as well as defense. The Basic and Advanced Combat courses are obviously more about defensive shooting, but would still serve anyone looking to increase their overall skills. Each course is comprised of drills. Note that even if you’re a hero operator, you can’t take the advanced courses until you pass the basic ones.

Other feedback from the app

For information junkies, the app has a history function, which is also invaluable for tracking progress. You can view one day, a week, 2 weeks, 1, 3, 6 , or 12 months, or your stats for all time. It displays total sessions, shots, average score, longest streak, longest gap, and goal achieved (expressed as a percent). A bar graph shows shot volume, and a target displays hits. There’s a subtle motivator here, as the app encourages users to shoot every day. So the longest streak and longest gap will be points of pride/shame for some users. I found it encouraging when I maintained a streak. And my longest gap was when I forgot where I left the X10, only to find it in my range bag.

As far as I could tell, the dry firing scoring and suggestions were dead-on. Where I had an issue was with live fire. Someone had left a nice pile of unbroken clay pigeons at the outdoor range. I lined them up against a 2×4, and proceeded to break them during one of the drills. The recorded speed between shots was obviously accurate. But my overall score for that string was low, even though I broke all the clays. The lesson learned from this was that the accuracy measurement is very unforgiving. This is a good thing, as it’s pushing for staying on target in a surgical manner. In the real world, a lower score might still be perfectly acceptable when shooting steel, or in a defensive situation.

My trigger time alone saved me more in ammo than the Mantis X10 Elite system costs. Sure, I could just dry fire, but I won’t get much value out of that by itself. It’s the feedback that really makes this system a worthwhile investment. Once I understood what it measured, and exactly how critical aim needed to be, I really made an effort to improve.  And I was rewarded for my efforts with each trip to the range. I’ve always been a “pretty good” shot. The more I use the Mantis X system, the better I get. Part of that is just being more aware of bad form. The trace function’s graphical view of the moments before and during the trigger break say a lot. I can see where I let my guard down a bit towards the end of a string.

Although I haven’t tried the system on a rifle yet, I plan on doing that next. Should be interesting to see if those flyers are from my ammo, or my own undoing. Overall though, this has been a great learning experience. I’d like to thank the folks at Mantis for providing their Mantis X10 Elite Shooting Performance System for my review. I’m not really sure what I expected before trying it, but now I’m sold on the value of this as a dry fire training system. Yes, it’s great for live fire too. But if it’s too cold to shoot outdoors, and too expensive to burn a few hundred rounds at the indoor range, this is a viable alternative to honing and keeping your skills sharp. Check it out at Mantisx.com.

Comments? Questions? Have any of our readers tried any of the Mantis X products? Feel free to share below.