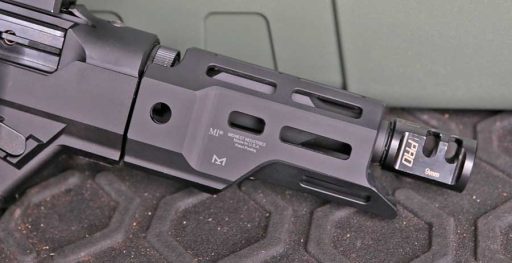 Midwest Industries offers an excellent 4.875″ M-LOK Handguard upgrade for the Ruger PC Charger. This is one of my favorite firearms, for several reasons. While it’s considered a pistol, it bridges the gap between a handgun and carbine. Sized like a submachine gun, but in semi-auto configuration only, it’s a fun range toy or very manageable defensive weapon. Out of the box, it shares magazines with the Security 9 pistol. Ruger smartly includes a Glock-compatible magwell, giving it much wider appeal. I’m certain that many buyers pair it with a handgun, and possibly the PC Carbine too. But it’s not perfect.

One of my biggest complaints has been the tiny handguard. It does the job, but not too well. Sure, Ruger throws in a handstop, which is nice. But the overall finish isn’t great, with some sharp edges. And it could have better ergonomics as well. If you’re thinking of a dual point sling for your PC Charger, you’ll need an M-LOK surface mount for it. Enter the Ruger Charger 4.875″ M-LOK Handguard from Midwest Industries. It neatly solves all of my concerns, at a pretty reasonable $139.95 price point.

Light weight shouldn’t be a surprise, given the eight sides of M-LOK slots on this handguard. That mill work gives you plenty of mounting options, while cutting weight. Midwest Industries also slimmed it down in size, with a narrower profile than the OEM handguard. It bulges out a bit at the rear, where it meets the Charger receiver. This keeps it looking like a factory part, almost. At that bulge there are anti-rotation swivel sockets on either side too.

This 6061 aluminum handguard has no sharp edges, and is finished with a durable Hard Coat Anodized finish. Plus the little extension on the bottom offers and extra inch or room for hands or accessories. Midwest Industries even includes a 5-slot M-LOK rail section. Pretty much everything I could want.

Since Midwest Industries includes includes the mounting block and even some thread lock, this is one of the easier installs I have done. Don’t take my word for it though, check out the video embedded below.

Well that was easy

Yeah, it was easy to install. It’s also a lot easier to embed a video than try to explain it in words. But really, this is one of those upgrades most anyone can do at home. The hardest part is not losing the small pieces. Anything spring-loaded is going to take flight when it’s on my bench. Once it was all back together, I reassembled my Charger, and adjusted it nice and tight. The improvement was immediately noticeable. My hand is much more comfortable now. So much better ergonomics. Between the extra inch of handguard, and my TandemKross muzzle device, I’m not sure that I still need a handstop.

Let’s talk about those QD swivel sockets for a minute. One of my goals has been to find a single sling “for all the things”. In my case, that’s the Magpul MS4 Dual QD Gen 2. It quickly converts from a single point to dual point sling. When shooting, I prefer a single point, and it does this very well. That factory rear socket on the PC Charger is placed just right. But I want to be able to sling most of my firearms across my back as well, using two mounting points. And that’s where this handguard from Midwest Industries comes in. I can use the front point as well, rotate the PC Charger to my back, and adjust the sling to hold it close. And then I can get back to LARPing, using my Glock clone that takes the same mags as my Charger.

Is this a $139.95 improvement over the factory handguard? I’d say yes. More M-LOK slots, better ergonomics, swivel sockets, and a nicer finish. Plus, easy at-home installation. In my opinion, Midwest Industries really nailed it this time. They’re part of the solid aftermarket support for the PC Carbine and PC Charger. Both of these firearms are immensely popular, and pretty dang good right out of the box. But if they’ve got some details that aren’t perfect, we can count on the aftermarket to step in and offer something better.

I’d like to thank Midwest Industries for providing their Ruger Charger 4.875″ M-LOK Handguard for my testing and evaluation. It’s definitely gotten my Charger that much closer to being as perfect as I could want. Now I just need some of those Hollywood-style unlimited round magazines that never run out…