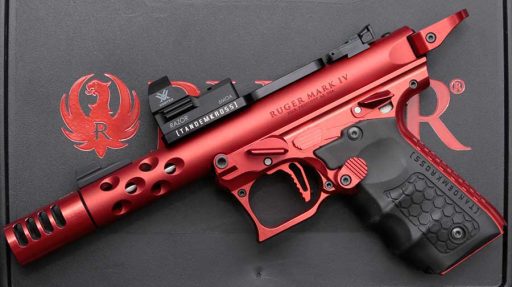 TandemKross is having a Memorial Day weekend sale (10% off everything!), and I’m presenting my updated Ruger Mark IV Lite on the TandemKross Kraken lower. These two bits of information are mostly unrelated. Except for the fact that this pistol wouldn’t be possible without TandemKross. So I’ll lay out the specs, in case anyone is interested. I’ve written about this pistol before, as it progressed, but never covered everything in its final form. And on some of the enthusiast sites I frequent, I get asked about it. Rather than typing out the full details in reply each time, I’ll just point them here.

Call it a frame, grip frame, or lower. We’ll know what you mean. From the factory, Ruger equips these pistols with a polymer lower that is perfectly serviceable. TandemKross improves on that with their aluminum version. And it’s awesome. Better ergonomics, and better lockup between the upper and lower. You give up the push-button disassembly in exchange for 1.5 twists of an Allen key. That’s a trade-off I can live with. And it works with just about every factory and aftermarket part you can find. Read about my initial build here.

A little trivia: Mine was one of the earlier versions, so it’s anodized. They switched to Cerakote later, which looks just as good, and will probably hold up better.

This red upper is from a pistol only available via Davidson’s, which is a distributor of Ruger firearms. Ruger doesn’t sell direct to dealers, so your FFL buys them from a distributor. And if they don’t buy from Davidson’s, they’re not getting red ones. Between that and the limited anodized finish, this thing is starting to sound kinda special. But it’s not. Anyone with patience (and money) can build a red one.

All those other little bits

Starting at the muzzle, there’s a Game Changer compensator. I cannot vouch for how effective it is as a muzzle brake, but it certainly allows my shot timer to pick up each shot. On top of the receiver is the Shadow mount v2.0 for my optic (Vortex Razor). Just over the trigger is the Striplin thumb rest. Right behind it is the Bolt Keeper extended bolt stop. It’s pretty much rattle-free, compared to the factory one. Directly below that is the Titan extended magazine release. In addition to the long option shown, it includes a smaller, round button. Tucked under it is the Hivegrip. Over the rear edge of the grip is the Cornerstone safety thumb ledge. It pairs well with the Striplin thumb rest for “thumbs forward” shooting. Finally, there’s a Halo charging ring hanging off the bolt.

Stuff you can’t see, but works to make this pistol great

Okay, so you can see the Victory trigger. But it’s part of the Ultimate trigger kit, which includes the trigger, a matched Thunder hammer and Lightning sear, plus the Blast Shield magazine disconnect. Good stuff right there. Crisp trigger with adjustable pre-travel and over-travel. The bolt has a Fire Starter titanium firing pin, and an Eagle’s Talon hardened extractor for reliable ignition and extraction. It’s also got a few hours of polishing with Flitz, so it runs nice and smooth. And wipes down easily. Inside the magazines are Green Springs, which are slightly stiffer, and offer more reliable feeding.

What that all adds up to

I’ve covered these parts in previous articles, so I won’t rehash them all over again. A quick search of the site will bring up each article. What I can point out is that I have owned several Mark IV pistols from completely stock to this Kraken. And all these upgrades address some shortcoming of a stock Mark IV. They’re not all necessary, but they certainly improve ergonomics, function, and reliability. In its current form, this pistol has never failed to go bang and eject an empty, unless it was a bad round. And it will eat just about any ammo I can find. It’s as reliable as a rimfire can get. I’ve heard it looks pretty good too. Do you need all these parts? Nope. But if you want them, or other great parts for a variety of firearms, head over to TandemKross.com, since they have 10% off this long weekend. And yeah, that’s 10% off items that are already on sale.