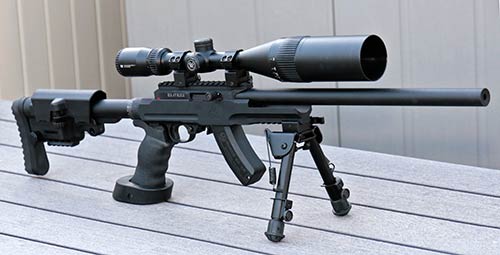 As I dig through my parts bin, I realize that not every project I build has to be kept long term. It’s been fun to throw parts together, just to create something different. The goal isn’t for me to add another rifle to my collection. Rather, it’s to show those interested in the Ruger 10/22 platform some potential ideas. So this is one of those that’s just meant to inspire creativity. And I did so many different builds last year, that I had to start naming them. This one, with a PMACA chassis, but some of my favorite centerfire parts, reminds me of a DMR.

Obviously, it’s build around the PMACA chassis with a UTG bipod. Inside is a Tactical Innovations Elite 22 receiver. I have several of these, along with WhistlePig barrels in different lengths. The one shown is 16.5″, and threaded. There’s a Tactical Innovations match bolt, with the spider web design and matte black charging handle. Trigger is a Ruger housing with KIDD “Trigger job” drop-in kit. TandemKross KrossPins and bolt release. All pretty standard fare for many of my projects. **Note that WhistlePig is now known as Acculite22.com.**

The A*B Arms Urban Sniper Stock X™ might be familiar, if you saw my Midwest Industries version of this build. I’ve also added an Ergo Tactical Deluxe Grip with Palm Shelf – Suregrip. It serves two purposes. First, it’s a great grip, and appropriate for this build. Second, that long name really helps bring my word count up for the article. The whole thing is topped off with a Vortex Crossfire II 4-12×50, which I swear multiply in my storage closet.

Why not? Okay, that’s probably not a good enough answer. Dropping a 10/22 in a chassis is pretty popular right now. Factor in the ability to use AR-style stocks and grips, and it’s easy to see why. Perhaps the fact that feeding a modern sporting rifle is somewhat expensive right now might also explain the popularity of rimfire rifles that share the same shadow as their centerfire brethen. This is fun to plink with, and at old ammo prices of 5-6 cents per round, it’s a guilt-free pleasure. Even at the current 8-10 cents, a couple hundred rounds in an afternoon isn’t going to put a dent in the wallet.

As I was writing this, I realized I didn’t extend the stock to the full shooting position for the photos. Which also reminded me that the stock is fully adjustable for length of pull. Plus it has that adjustable cheek riser. Which makes it great for parent/child use. Without getting on my soapbox, I’ll mention a few words about firearms safety. If you want your kid to be safe, take them shooting. Teach them the rules of firearm safety. Remove the mystery, and you satisfy some of that curiosity. Once my dad took me shooting, I understood the importance of safe handling.

It’s cold out. As I was typing this, it was 39 degrees outside. I had to put on a jacket and flip flops to go take photos. If you live someplace cold, chances are you’re doing less shooting outdoors. Some places, indoor ranges are closed too. But that doesn’t mean you have to give up firearms completely. At the same time, you can only clean and polish so much. Why not build something new? Well, besides a lack of inexpensive parts, why not?

Even if it’s just a creative exercise, it’s still fun. Tracking down the parts, deciding which chassis, receiver, trigger, stock, grip, barrel, and scope. It’s good way to keep the brain occupied. I’m fortunate that I have a few spares to choose from. So I’ll put together something like this, and share it on some sites I frequent. Maybe answer some questions, and inspire someone else to build something similar. Or different. It keeps me busy between bigger projects, which makes it totally worth it.

So what do you think? Would you want to build one, or is it not your style? What would you do differently? Comments and questions are welcome. Feel free to share below.