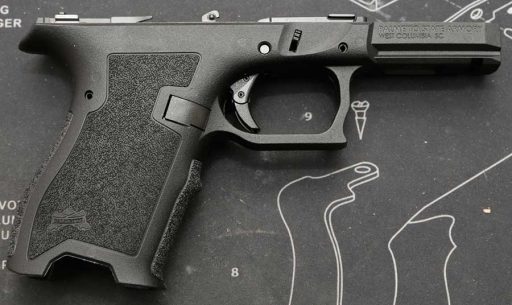 I remember reading about the Dagger 9 from Palmetto State Armory sometime in early 2020. This was going to be their $299 pistol that was compatible with all Gen 3 Glock 19 parts. As the owner of a Ruger PC Carbine set up to take Glock magazines, this intrigued me. An inexpensive pistol that used the same magazines as my carbine seemed ideal. And so the wait began. Then Covid happened. Eventually, I just gave up. I don’t even know when they finally released them, but it was well over a year after their initial expected date. Now I see seven variations on their site, all out of stock. But what is in stock frequently is the complete PSA Dagger frame, for $99. Realizing that this was a viable option, I bought a few, and set about building some different Glock clones. These are future articles though, so bear with me. Gotta cover the PSA Dagger frame first.

Given the popularity of the blocky Austrian pistol, and the aftermarket support, it made sense for PSA to hop on board. Rather than go with an 80% kit, the PSA Dagger is offered as a finished frame, in three levels of completeness. Unlike an 80% frame, these are complete and serialized so they must be transferred via your FFL. For $69.99 you can get a pistol frame without the fire control group. At $79.99, it’s a complete frame, less the trigger group. For high rollers like me, $99.99 gets you a complete frame, ready for a slide. Naturally, they will also sell you each and every individual part, if you want to assemble your own. While this is a viable option for some, I suspect that plenty of buyers just want a frame they can drop a complete slide on. Seems PSA agrees with me on this one.

There’s probably still going to be some debate over buying a complete frame, vs hand selecting each part though. On the one hand, it’s less expensive to just get a complete one. At the same time, those may not be the best parts available. Yet this also means it’s ready to go with the addition of a complete slide. That’s going to have a lot of appeal. A trigger upgrade to any of the popular models is going to cost more than the complete frame did in the first place. But it’s not all that uncommon to ignore the $600+ price for a new complete pistol, and instead piece one together over time, to get exactly what you want. Even if it costs more. We do it with ARs and 10/22 clones, so I don’t see any reason why this would be different.

This polymer frame is designed to be compatible with Gen 3 Glock 19 OEM and aftermarket parts and accessories. Based on feedback from every single person I have handed it to, it’s got a nice feel and good ergonomics. Texturing seems just about right – not too aggressive, but not the least bit slippery. The textured panels extend up high, and can be stippled if something more aggressive is desired. As expected, the fire control group is single action and striker-fired. Its trigger is flat-faced, but clearly curved. By design, there is no manual safety, just the striker block safety and trigger safety.

Other features include a slide stop lever assembly and a magazine release assembly. There’s also a railed dustcover for a light, laser or combination. I think the trigger undercut might be a bit more generous than on the original. Just like the backstrap seems to have a bit more of a curve towards the base, and a little more material at the top. Down at the base of the grip, there are some cutouts. They add some visual appeal, and probably help strip a mag out too. Overall, it’s a pretty attractive frame. Unless you prefer something blockier.

I reached out to several manufacturers of aftermarket barrels and slides, focusing on those that met some specific criteria. In the end, I found three that met my goals as far as price points and features. They includes slides machined from 416 stainless and 17-4 stainless. I doubt that I will see enough rounds through either to worry about the difference, but there was a price difference, which is why I chose them. And on the more expensive models, I got threaded barrels. Just thinking ahead there. Two are nitrided, with the third having a PVD coated slide and barrel. As much as I appreciate a nice stainless barrel in its natural state, aesthetics take a back seat to durability and function this time. Prices ranged from $279, to $395, to $500+. Variety is good.

After assembling and shooting them all, I will assess them and determine which upgrades I should pursue. Because even though the actual $299 PSA Dagger might exist, I’m reasonably sure some owners are going to change them up a bit. It just depends on whether they are viewed as an inexpensive pistol, or a base to customize. In my case, each Dagger frame is a blank canvas. So it’s entirely possible that I could end up with a pistol that costs a fair amount more than the Dagger or a stock Glock. But I’m pretty certain that if I do, I won’t have many complaints – it will be as close to perfection as possible. And it will of course be the perfect companion to the PC Carbine and PC Charger.

Comments? Questions? Have any of our readers gotten their hands on a complete Dagger, or at least the frame? Feel free to share below.