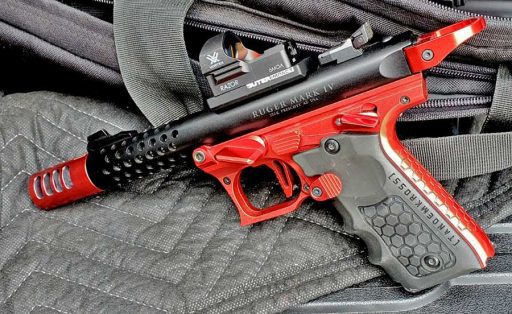 I’m my not too humble opinion, the Kraken lower from TandemKross is one of the best things to happen to the Ruger Mark IV 22/45.  It’s a completely redesigned, stripped aluminum lower, ready to take OEM or aftermarket parts. Obviously, the idea behind it is to assemble it using really great aftermarket parts. There was just one catch. Not all the parts to build one from scratch were available from Ruger or the aftermarket. That meant starting with a donor lower, and stripping many of the parts. While this made sense if you already had a Lite model, it was something of a dealbreaker for anyone looking to use one with a Pac-Lite or other upper.  Well, TandemKross just changed that with their new B.Y.O.K. (Build Your Own Kraken) option. Oh, they also offer two new colors, for a total of four now. But first, the kit.

This isn’t just a handful of parts to save you the trouble of stripping an OEM lower. They’re including all the good parts in the kit. For starters, you get a TandemKross Victory trigger paired with the Volquartsen Accurizing Kit. And the Cornerstone oversize safety thumb ledge, plus a Titan magazine release. These go great with the Bolt Keeper extended bolt stop. Also in the package are their hiveGrips with titanium screws.

Small parts include the bolt stop pin, bolt stop, and stud. There’s also a safety, “Rebuild Kit”, and “Essential Maintenance Kit”. That covers parts like a new firing pin, extractor, and springs. Combined, these include all the bits and pieces necessary to assemble a complete and functional lower. In case it’s not totally obvious, the Kraken lower in one of four color choices is included as well. The B.Y.O.K. kits come in black ($240), or red ($255). It’s important to note that nearly all OEM and aftermarket parts will work with the Kraken, so if you want to change things up later, you’re not limited to what comes in the kit.

Nothing is missing from the Kraken kit that would keep you from having a functional pistol. There are some items I do recommend adding though. TandemKross offers an excellent thumb rest (gas pedal) from Striplin. Every owner of this pistol series should probably have a Halo charging ring too. Once you’ve used one, you’ll never go back to pinched fingers. Finally, their Game Changer compensator is great for competition. It looks awesome as well, even if you aren’t worried about timers picking up your muzzle blast. All these items are listed on this page.

Originally, the Kraken was available in anodized red, or matte black. They switched from anodized red to Cerakote, which I think looks better, but should also be more durable. And now they have added blue and green options. I really like the green, as it’s a subdued, olive drab shade, which would look good with a black barrel. If I build another Kraken though, it will be the matte black, as I want a blacked out pistol to match my “blinged-out” red one.

How much work is it to assemble one?

As I mentioned in my original article, I spent about an hour assembling my Kraken. That was taking my time. It’s something that could be done at home with basic tools. If that’s outside your comfort level, any competent gunsmith familiar with the Ruger Mark series should be able to get it done in the same amount of time, or less. TandemKross also has a really good video showing the process. My suggestion would be to watch the video first, and from there, it’s easy to decide whether it’s within your skill set, or if you need to get assistance.

Time to pull the trigger?

On the enthusiast sites I frequent, many prospective buyers mention interest in the Kraken, but the donor requirement is off-putting. Now that concern has been put to rest. The Kraken itself is priced at either $319.99 for matte black, or $329.99 for the red, green, or blue. Add $240-$255, depending on the B.Y.O.K. kit selected, and you’re in for $559.99 to $584.99 (prices current at time of publication). That’s not inexpensive, but you certainly get a lot for your money. My Kraken is far and away everyone’s favorite to shoot, whether me my friends, or even strangers at the range. It points well, stays on target, and is as much of a tack driver as a pistol can be. Whether building one for competition or fun, it’s hard to beat. Check it out at TandemKross.com.