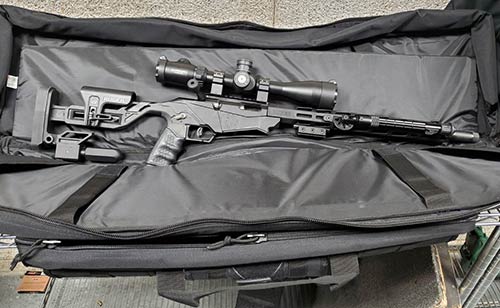 Late last year, I went searching for a new rifle case, and ended up finding the Ranger, from 3VGear. They’re located about 40 minutes from my home, and I do like to promote local businesses. So when I saw their Ranger 42″ padded double rifle case for $83.95, I figured I’d get one for hauling rifles, and if it worked well, share a review.

The company’s name refers to the Latin expression veni vidi vici, meaning “I came, I saw, I conquered”. While attributed to Julius Caesar and a swift victory in battle, the modern meaning is more about getting things done, and going on adventures. Given their product line, which covers both work and play, it’s an appropriate choice. And if you haven’t seen them in your local stores, it’s because of their sales model. They’ve chosen the direct-to-consumer sales model, which cuts out the middle man and their markup.

Being a smaller, direct sales outfit has some pros and cons. Obviously, better pricing is one of the pros. Not being able to try them in a store might be a negative. But they offer free shipping on orders over $99, and a 30 day no hassle return policy. Plus a lifetime warranty. So they’ve effectively removed most of the risk while building in some extra value. Which makes them worth a look. I’ll start with the Ranger 42″ bag (they have a 36″ Ranger as well), since that’s the one I’ve been using for the past several months.

No need to reinvent the wheel here. 3VGear uses a 600 Denier polyester, with a PVC coating on one side. That makes it both durable and water-repellent. Actual dimensions are 42″ long by 12″ high, by 8″ thick. Inside the main compartment, two EVA foam-lined compartments hold your rifles securely. Corner pockets and Velcro add a little extra security. In addition to the main rifle compartment, there is a secondary zippered compartment. This measures 24″x10″x2″, and conveniently has two padded pistol pockets.

Ammo, magazines, and other accessories go in the outer pockets, or which there are three. The outermost pockets have bungee cinches, under a flap that buckles. The middle one double buckles, with a space between for some morale patches. Zippered compartments with MOLLE webbing reside on either side of the pockets. There’s a padded grab handle for shorter trips, and nicely padded shoulder straps for when you need your hands free.

My first outing, I threw in a Ruger American Predator and a Ruger Precision Rimfire. Bolt actions with big scopes fit well, and traveled safe. I also included some magazines, ammo, ear pro, and shooting glasses. On other trips, I used it for a couple of custom 10/22s, as well as a pistol and revolver. In addition, I also brought along all the support items (mags and ammo) specific to them. A pair of America’s favorite modern sporting rifles fit just fine too. But with ammo prices being what they are, I’m in no hurry to shoot what I can’t easily replace.

As I loaded it up, I realized the Ranger 42″ case could probably hold more than I want to haul. Not by a lot though. It’s not one of those bags that encourages bringing too much. At the same time, it’s not lacking in space, unless you have unlimited ammo. Which isn’t anyone I know these days.

Reviews like this are easy and difficult at the same time. Put stuff in case. Take stuff out. Yeah, it works. It easy to forget that it’s the little details that make or break something like this. None of the zippers got stuck, and they all have pulls on them, making them easy to use, even with gloves. The buckles are big enough to use easily too, are quick to adjust, and didn’t shatter in Utah’s cold weather. Everything fit without rattling or banging around. Nothing got scratched, scopes didn’t unexpectedly lose zero.

At our indoor range, it doesn’t take up a lot of space, and is easy to work out of. Usually, I might have two or more rifle cases, and a range bag with ear/eye pro. Plus my pistols or revolvers would go in the range bag. So everything would be spread out, as though I was having a pew pew picnic. Instead, I can keep all my gear centralized. Which is courteous when you’re sharing space with others. The Ranger 42″ just does its job. And from past experience with the materials, it should hold up well for a long time.

In use, part two

Because I get busy with life, this review got put on hold for a bit. Then I got to go shooting more, and the weather finally cooperated enough to start shooting outdoors. Next thing I know, I’ve got a dedicated 4WD (Toyota FJ Cruiser) for my weekend outings. As luck would have it, the width of the floor of the storage area is 42 inches. The Ranger 42″ Padded Double Rifle Case is a perfect fit. So I can throw two .22 bolt rifles, two pistols, a suppressor, and one million dollars worth of ammo in the bag. Plus ear pro and glasses. A folding shooting table sits on top. When I get to my favorite site, I take out the table, and everything else is accessible right from the bag.

I also remembered that there are shoulder straps. So with a single rifle inside, I took a hike longer than across the parking lot of my indoor range. It was actually a couple hundred yards. Just long enough to realize that the straps do a good job of handling the weight, but the overall length made it a bit awkward. Since I can’t see a situation where I would want to carry a cased rifle over any great distance, not an issue for me. And really, that’s not a negative on the case. Just my personal preference.

Really, I can’t find anything not to like about the Ranger. It’s durable, includes plenty of smart storage features, and has an attractive price. In the ten years or so that I have been reviewing outdoor gear, I’ve handled and tested plenty of bags and backpacks. I recognize good materials and design. A close look at the stitching is a good indicator of quality too. Straight, even stitches aren’t found on the cheaper products. The Ranger looks to be very well made, with double stitching and bar tacks in all the right places. I’m looking forward to using it for years. And the fact that it’s a perfect fit in my vehicle certainly doesn’t hurt. If you like the Ranger 42″ Padded Double Rifle Case from 3VGear, but don’t need a case this big, check out the 36″ Ranger, along with some cool backpacks and other bags at 3VGear.com.

I’d like to thank 3VGeat for providing their Ranger 42″ Padded Double Rifle Case for this review. It’s been a great addition to my shooting gear, and I’m proud to share this Utah-based company with my readers.