Schurter, in the team’s lead group of two, put in several small attacks on his breakaway partner in the final minutes of his race allowing him to take the win by three seconds. Vogel sat just behind Schurter in a chase group of two. 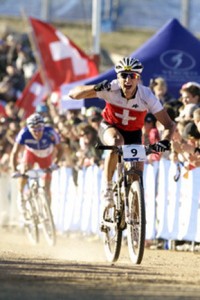 The Cross-Country World Championship course was technical and fast, starting at the top of the mountain and descending over various terrain, including drop offs, speed sections, alpine-styled trail jumps and super berms.

The SCOTT-Swisspower Team also benefits from the lightweight, stiffness and quality of its Ritchey Design SuperLogic, WCS Carbon and WCS Alloy components, including Ritchey Design’s newly designed SuperLogic Carbon Tubular Mountain bike wheels that will be displayed at Interbike 2009.