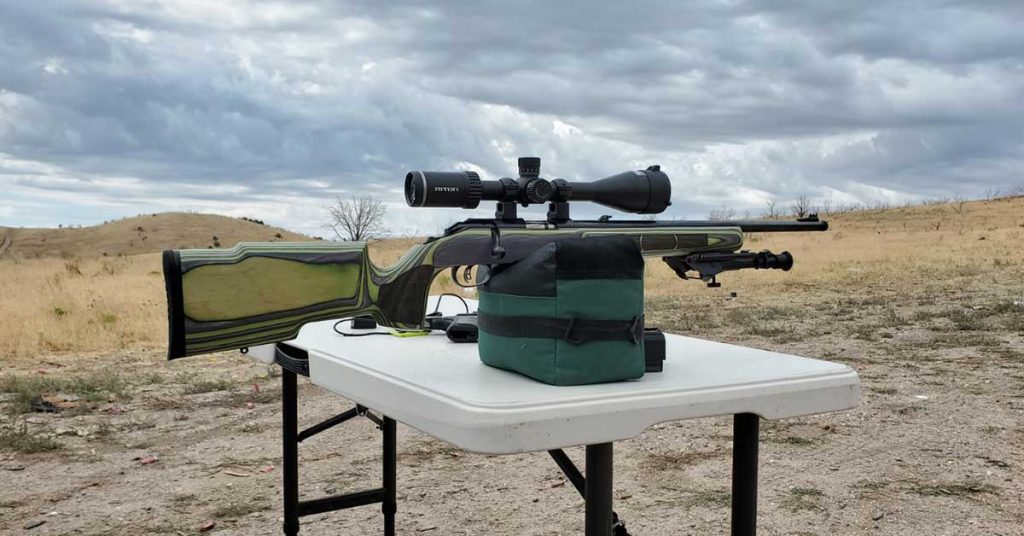 Ruger American Rimfire in .17 HMR with a Boyds stock, and Riton scope

Here’s an installment of my efforts to review each caliber option of the Ruger American Rimfire. This one happens to be chambered in .17 HMR. After getting a really good deal on some ammo, I decided to try out this zippy little caliber. Since I also have one in .22 WMR, either one can use this sweet Boyds stock.  And they share the same 9 round rotary magazine. So everything was pretty familiar, except for the tiny 17 grain bullet that zips along at around 2600 fps. It made for a fun shooting experience, after so much time with .22 LR rounds at less than half that speed but twice the weight.

This is the model 8312, which comes with a threaded (1/2 x 28) 18″ barrel, and a black synthetic stock. Ruger includes a flat comb stock module, and one with a cheek riser, for using the irons or scope. At the muzzle end is a Williams fiber optic front sight paired with an adjustable rear sight. Capacity is 9 rounds in the familiar rotary magazine. Length of pull is 13.75″, overall length is 37″, with a weight of 5.5 pounds.

Less visible is Ruger’s patended Power Bedding, which mates the action to the stock, while free-floating the barrel. Ruger’s Marksman Adjustable trigger is included, and can be set between 3 and 5 pounds. There’s also a tang-mounted safety. The 60 degree bolt throw easily clears any scope you might mount, and it’s already tapped for Weaver # 12 bases.

Contrary to what you might think from the photos, I did shoot it in completely stock form first. And of course, had a few extraction issues, which seems to be normal across the Ruger American Rimfire line. Unlike my other rifle, it mostly resolved itself after a box of ammo and a thorough cleaning. I’d still write Ruger and ask for a replacement extractor, as chances are it will need to be swapped sooner rather than later. Luckily, it’s a quick and easy swap. In this configuration, with irons, I was able to hit soda cans out to 40-50 yards, but definitely wanted to throw a scope on.

Step two was to swap the stock module for the one with the taller comb. I needed to do this, as I installed the Weaver #12 mounts and a scope. The swap is as easy as removing the rear sling stud and pulling the module off. Install the taller one, and reinstall the stud. Ruger offers a more compact module as well, for those needing a shorter length of pull. I put another box of ammo through it, on a super windy day. Only one failure to extract, which was a good sign. But in high winds, I felt like I was burning ammo for the sake of breaking things in a bit.

Turns out that a Vortex Crossfire II 4-12×50 is a poor choice for the .17 HMR round. I was picking off empty shotgun shells at various distances, but needed more magnification. My vision isn’t great, and this rifle definitely has some accuracy potential. So I dug into the scope pile, but also reached out to some people who know some people.

At this point, I figured I could borrow the Boyds Pro Varmint stock from my .22 WMR. While I was at it, I’d install another Vortex scope, this time a 6-18×44. It’s not a terribly expensive optic, but works well for my needs, especially with rimfire. So I dropped this Ruger American Rimfire .17 HMR into the Boyds stock and mounted up the scope. A quick zero and I was off to the range again, with high hopes that I could do better with more magnification.

With the stock and optics sorted out, I attempted to shoot some groups. After a little fine tuning, I was getting three shot groups of about 0.5″ at 50 yards. That was with the 17 gr Hornady V-Max. For me, that’s an outstanding result, and I’m sure someone with more patience and skill could wring out even smaller groups. There was also a 4″ steel gong set up at 75 yards, and ringing that was easy enough too. Part way into this review, Riton offered their excellent 1 Conquer 6-24×50 scope for testing. Much better for the level of precision I was after. And distances too. While it was easy to bust up clays around 100 yards out, my groups never really improved. Switching to CCI got me the same results. Bad groups were about an inch at 50 yards, with most looking like the one below.

I checked some other reviews, to see what the rifle is truly capable of. And it would seem that 1/2 MOA isn’t unheard of, even at 100 yards. I’m just not able to keep all three rounds that tight. Knowing that I’m not the best shot, it’s clear that the rifle has more potential. Although I’ll point out that I prefer more practical shooting. If I can hit an upright shotgun shell at 60-75 yards, that’s accurate enough for me. Not surprisingly, my testing was with the trigger set at the minimum 3 pounds. It probably contributed to my accuracy. As this isn’t my first Ruger bolt action, I’m accustomed to the bolt throw too. So it was a bit like settling in behind an old rifle, even if it was new to me. Speaking of bolt throw, I polish each bolt with some Flitz, and it’s much smoother cycling.

The Ruger American Rimfire line has been out for some time now. Other journalists have written plenty about the rifles, including ergonomics, handling, and accuracy. I’ve got nothing groundbreaking to share. After a brief break-in, the extraction issues resolved on their own. It was easy for me to shoot the little .17 HMR round quite accurately, at least for my skills/eyesight. Lol. Whether using the factory stock or an aftermarket one, the rifle is comfortable and would be at home in the field or off a bench. Current $489 MSRP for this model makes it a good value, and it’s backed by Ruger’s excellent customer service.

The .17 HMR round is a first for me, and I really like how fast and flat it shoots. Although my wallet prefers slower and heavier .22 LR. Which brings me to the use case question. I understand the .17 HMR is a good option for hunting smaller animals, and is more effective than its .22 LR counterpart. That’s as long as shots are taken at a humane distance to transfer enough energy. At 50 yards or less, .22 LR is certainly more cost effective. But if you need to shoot beyond that, then the .17 HMR has an edge. While it does get whipped around in a good breeze, that’s what I have the .22 WMR for as well.

Keep it, or return it?

I’d like to thank Ruger for providing their Ruger American Rimfire in .17 HMR for this review. I’ll put a few more boxes of ammo through it before I decide the next step. One option is to remove the scope, put it back in the OEM stock, and ship it back to Ruger. No fun in that. Or I can mail them a check, and keep it in the collection. I’ve got some time before the review period is up, so I’ll burn up the rest of my ammo before I make a decision.

As a follow up to this article, I should have a full review of the Riton 1 Conquer 6-24×50 scope, as well as the Boyds laminated stock coming soon.