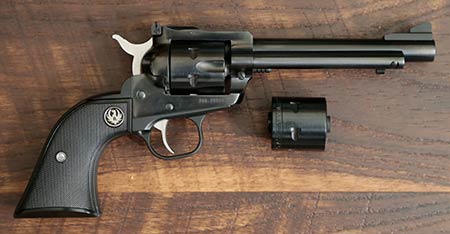 Ruger’s Single-Six Convertible is another example of a firearm design standing the test of time, and then some. Their original .22 LR Single-Six was first offered in 1953. Since then millions have been sold, and they are still in production today almost unchanged. With few exceptions, most current .22s seem to be polymer, magazine-fed semi-autos. So it’s impressive to see an all metal, single action revolver hold so much interest. I briefly owned one many years ago, and figured it was time to revisit the Single-Six, but opted for the Convertible, which includes a matched .22 WMR cylinder.

The Single-Six is no lightweight. Its barrel, cylinder, and the rest of the cylinder frame (upper) is all steel. My 5.5″ barrel model weighs 33 ounces, even though the grip frame (lower, including the trigger guard) is actually aluminum. That’s a half pound more than Ruger’s Mark IV Lite semi-auto. But it’s a nice heft. Not too heavy, and the kind of weight that reminds you this is an heirloom gun. With minimum care, it can be handed down for generations. A full steel frame probably wouldn’t offer more longevity, just increased weight and production costs.

A ramp front sight is paired with an adjustable rear sight. The cold hammer-forged barrel has six grooves in a 1:14 right hand twist. Grips are hard rubber with a black checkered texture that matches the blue finish well. With the 5.5″ barrel, overall length is 11″. This being the Convertible model, it comes with a separate .22 WMR cylinder, which is easily swapped for the installed .22 LR one. The revolver, extra cylinder, lock, and instructions all come in a lockable plastic hard case. No cheap cardboard box here.

On the left side, below the cylinder, it’s engraved “Ruger 22 Cal New Model Single-Six”. In 1973, Ruger upgraded the Single-Six with their transfer bar mechanism, which added a huge measure of safety. Traditionally, a single action revolver was carried with the hammer resting on an empty chamber to prevent accidental discharges. With the transfer bar, it cannot fire unless the trigger is pulled. Other than barrel lengths, finishes (stainless is an option) and some different chamberings, this is the only significant change in nearly 70 years.

One of the things that makes this a great firearm for beginners is the loading and unloading process. Swing out the side gate, and rotate the cylinder, dropping six rounds in, one at a time. Definitely not for anyone in a hurry. This slow and deliberate process also reinforces the concept of making every shot count. Very different pace from a semi-auto, where another ten rounds is a quick mag swap away.

Unloading fired brass is similar, but a bit slower. Open the gate, line up the chamber, and use the ejector rod to push out the empty brass. Once all six have been pushed out, the loading process can be repeated. The reason I sold my original Single-Six was I found this to be too slow for my liking. Since then, I have come to appreciate taking my time. It just makes the actual shooting part more rewarding.

In a double action firearm, pulling the trigger cocks the hammer, and then releases it, firing a round. Since the Single-Six is a single action, the hammer must first be cocked manually. As I’m right-handed, I use my right thumb. But I have seen other shooters use their supporting hand’s thumb to cock the hammer as well. Either way is fine. Once the hammer is back, the trigger can be pulled. Repeat as necessary.

One of the biggest reasons I wanted the Single-Six Convertible was the ammo options. I’ve got plenty of .22 LR, even though it seems to be a bit hard to find and overpriced right now. But there are a lot of sellers on the secondary market getting rid of .22 Long and even .22 Short ammo at cheap prices. And I’ve been buying up as much as I can. Because the .22 LR cylinder can fire shorts and longs in addition to the .22 LR.

The “Convertible” part of the name is a reference to the included .22 WMR (Winchester Magnum Rimfire) cylinder. Open the gate, press the base pin latch button on the left side of the frame to release the base pin, and it’s quick and easy to swap between the two cylinders. This allows me to shoot relatively quiet, low velocity ammo, all the way up to loud and fast Magnum rounds. That versatility lets me get in plenty of range time without breaking the bank.

Shooting the Single-Six was more fun than I remember. When loading, it’s held in my left hand, and I can admire the weight, the finish, and the mechanical click as the cylinder rotates. Each time I bring the hammer back, I hear that sound that every movie and TV Glock makes (lol). The trigger break is smooth, but could be crisper. My sights were dead on out of the box, which was nice. If not, the rear site is easily adjusted for windage and elevation. And my big hands found the smallish grips to be fairly comfortable. The right side grip did have an edge that irritated my finger a bit, but I’m already working on a solution for that.

The Single-Six Convertible was never meant to be a precision firearm. While it certainly could be used for hunting, it’s an ideal plinker. Empty cans, spent shotgun shells, and broken clay pigeons are my targets of choice. With cheap bulk ammo, soup cans out to about 25 yards are easy enough to hit most of time, even with my less than perfect eyesight. 2″ steel spinners at closer distances are very satisfying as well. No groups to report, because I didn’t bring paper targets on any of my outings. But if you’re obsessed with small groups on paper, this might not be for you.

Cleaning the Single-Six is a pretty simple task. Pop out the cylinder, and you’ve got access to the barrel. I usually just use a bore snake unless it’s really dirty. More time is spent on the cylinder, as if it’s too dirty, empties may stick. A quick brushing of the chambers, then I use a stiff nylon brush to clean any powder residue. Wipe down anything else that’s dirty, give the bore a chambers a pass with a lightly oiled patch, and it should be good. I also put a drop on the base pin before reinstalling it. Ruger’s instruction manual covers all this pretty well, including complete disassembly, which is rarely necessary.

What the Single-Six Convertible does offer is a lot of fun. The slower pace and lower capacity forces the shooter to focus on making each round count. When shooting with friends, reloads offer some time to chat as well. There’s also no denying the appeal of an old western-style revolver. Long before there was John Wick, we had John Wayne. So many of the original buyers of the Single-Six bought them after watching westerns. And I suspect a fair amount of current buyers are looking to relive the simpler times of their childhood as well. For what it’s worth, there’s no shortage of holsters with a matching cartridge belts. Hats and boots optional.

With the extra energy and range of the .22 WMR round, the Single-Six Convertible is a good choice for the humane dispatching of varmints as well. I can see this being handy on a ranch or large rural property. Let the kids shoot it with whatever ammo is available for the .22 LR cylinder, then swap back to the .22 WMR for the heavy lifting. Convertible equals versatile here.

The MSRP of my review sample is $629, so it might not be for everyone. Not too long ago, Ruger released their Wrangler, which is a lower cost (MSRP $249) .22 LR only revolver, patterned after the Single-Six. It has an aluminum frame with a Cerakote finish. Although it’s unclear how well they will hold up over time, it’s still a fine entry into single action revolvers, and as expected, has been wildly popular. Some of that may be due to the low retail price, which is closer to $200, if not under in some stores. The fact that rimfire is still the least expensive ammo doesn’t hurt either. So if the Single-Six is out of your budget, it’s worth giving the Wrangler a look.

I’d like to thank Ruger for loaning their Single-Six Convertible for this review. It’s a solidly crafted revolver that’s great for new shooters or seasoned veterans. You can view their full range of Single-Six models here.