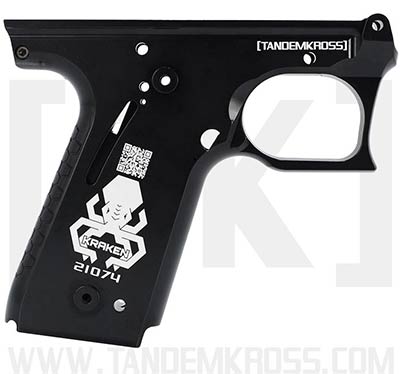 Today, TandemKross released their Kraken aluminum lower for Ruger Mark IV 22/45 pistols. This is actually one of their biggest innovations, in my opinion. It’s also one of the most exciting new releases for Ruger Mark IV 22/45 owners. For anyone wanting to build a custom Mark IV pistol from scratch, there was no option other than to start with a complete Ruger. And if you already had a Mark IV 22/45, and replaced the barrel with an aftermarket one, you couldn’t just go out and buy another lower. All that has changed with this new stripped lower.

Designed to accept factory or aftermarket uppers, I see this as being an excellent choice for competition or just serious plinking. Of course, OEM or aftermarket internal components will transfer right over as well. And TandemKross has made a few changes that improve on an already excellent design.

Firs thing I noticed is the oversized trigger guard. It’s bigger, which makes my big hands happy. But it will also accommodate gloves easier, which is going to appeal to some users as well. The front of the trigger guard has a little hook, which should make for a great finger rest. I suspect I may have to change my grip, but it will also be more solid. I’ve never really had any issues with the OEM backstrap, but the new texturing is attractive, and if it improves grip, even better.

All the usual factory and aftermarket parts will fit, just like OEM. While it’s still critical to maintain correct torque values, stripping threads should be less of a concern.

One feature I am interested in seeing up close is the redesigned mainspring housing. The Kraken gives up the one button takedown, but offers more solid lockup between the upper and lower. Even my newest pistols have some play, so this could be a welcome change. TandemKross states this will contribute to better reliability and dependability. That’s one area that is kind of hard to improve, but then again, mine are only a few years old, so I don’t know how much wear to expect. Over time, I suspect this system will hold up better than the original.

Assembly will also be easier, thanks to the sear retention hole. This is going to eliminate a lot of frustration (and probably profanity) when it comes to assembly. An included 1/16″ allen wrench keeps the sear in place while the hammer is installed. Speaking of hammers, there is even a a limiter so that the hammer cannot be cocked over center. Even less swearing now. Those who have done this already will appreciate these features. If you know, you know.

Basic black is $279.99, and red is an additional $10. There was no mention of silver being a future option, but I’m sure if enough people ask, we may see that. There really isn’t anything to compare the price to either. The only other lower on the market (which isn’t compatible with the Mark IV), does include some additional parts, but it’s also $200 more. So it’s not a fair comparison in any way.

Who will want this?

Besides me? Anyone who has, or is building a Mark IV 22/45 with competition in mind should give this a good look. Even if they’re not competing, it’s a great option for someone who just wants the best. While I think it has its place on competition pistols, I see another buyer – those who have upgraded their barrel/upper. My first Mark IV 22/45 came with a steel bull barrel. I replaced it with a Pac-Lite, and since then also bought a pair of 22/45 Lite models. That left me with four uppers and three lowers. And no chance of getting a stripped lower, until now. I know I’m not the only one in this predicament.

Naturally, I have one on order already. My plan is to take one of my existing pistols, that’s already been modified a bit, and transfer everything over to the Kraken. Then I’ll give it a solid test, and write up a review. Meanwhile, with all the upgrades I have done to my other pistols, I have nearly all the internal parts to put back into my OEM lower. That will become my dedicated suppressor host, as the barrel has been cut to 2.5″, and threaded. I’ll still need to source some parts, but it should be less than buying a whole pistol. Even then, I’m expecting it to be worth it for the upgrade on my more competition-style pistol. So stay tuned.

In case you missed the link above, click here to be taken to the TandemKross Kraken aluminum lower for the Ruger Mark IV 22/45 pistol.