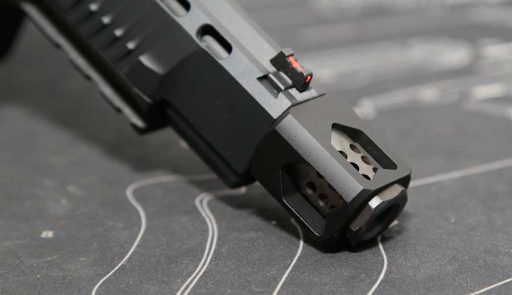 Since I have a few threaded 9mm pistols, I wanted to give the Glompensator from Rex Silentium a try. I’d read some good things about them, and really liked the design. And I’ll be the first to point out, somewhat ironically, that I don’t always trust online reviews. To be fair, these weren’t really actual reviews, just user comments on an enthusiast site. But each one was one firearm, and one ammo type, and not a lot of context as far as the shooter’s overall experience. So I reached out to Rex Silentium, and they sent me a couple to use and abuse on different pistols. This allowed for a much more comprehensive evaluation.

The Glompensator is a two piece design with internal locking, so no set screws or thread lock is required. It’s comprised of an outer aluminum body with a black mil-spec finish. That goes on first, then the inner steel nut goes on, to hold it all in place. Three ports on the body allow gases to escape from the nut, which has three rows of holes in it. Since there is no port on the bottom, it’s possible to use it when shooting prone in dusty conditions.

To meet USPSA, IDPA, and SOF legal dimensions, it’s just 1″ wide, 1.25″ long, and 0.80″ thick. By keeping such a low profile, it doesn’t interfere with sights or guide rods. Overall weight is just 1.2 ounces. Rex Silentium points out that it’s not just for pistols, and works great on pistol caliber carbines as well. As far as durability, it’s full auto rated, so 9mm rapid fire in competition shouldn’t be a concern.

With its two piece design, installation of the Glompensator is a bit different than one piece compensators with a set screw. Place the body over the barrel, making sure the port is facing up. Then insert the nut, and tighten down. It needs to be very tight, while maintaining correct timing. I used my small bench vise for assistance. After installing them and using them on multiple pistols they’re showing a bit of wear and tear. This is not the compensator for your polished or plated BBQ gun. It’s for real world and competition use.

Range time with the Canik TP9SFx

The first pistol I installed a Glompensator on was a Canik TP9SFx. While it’s a pretty good competition pistol, known for a great striker trigger, it’s also light at 1.61 pounds. So light that muzzle rise can be an issue. With a new threaded barrel for it, we set out to see if the Glompensator could tame that a bit. It should be noted that Canik provided a lighter recoil spring at no charge, so we could run 115gr ammo. When we used the factory spring that came with it, 115gr ammo, and the Glompensator, it just choked, stovepiping every round. Even with the lighter spring installed, it was just too effective, causing the pistol to be unreliable with lighter rounds.

Switching to 124gr and 147gr loads, the Canik cycled just fine. We shot some slow motion video, which confirmed that there was less muzzle rise. It still went up some, but came down so quick that it wasn’t noticeable in realtime. Follow up shots were faster. It was easier to stay on target and shoot more accurately, quickly. Although everyone seems to love the Caniks, I’m a bit disappointed. Out of the box, I needed a lighter spring to get it to cycle my somewhat plentiful and inexpensive practice ammo. Even then, the Glompensator did its job too well with the light stuff. But if you are shooting heavier 124gr or 147gr rounds, it definitely makes a difference. Score one for Rex Silentium, and a neutral for Canik.

Range time with the CZ 75B

Machined from steel, the 2.2 pound CZ 75B is the polar opposite of the Canik. Heavy, hammer-fired, and not really known for recoil or muzzle rise. With more than a half pound of extra weight, it’s relatively soft shooting, and easy to keep on target. It will also eat any ammo, any weight – from cheap steel case mystery ammo, to overpriced Nosler match grade ammo. This has been a 100% reliable pistol. Note that I’ve been a CZ fan for over 15 years, and I am totally biased. It’s not like I think it’s the greatest pistol ever made, and there is no way to improve upon it. I just didn’t think that adding the Glompensator would really make a difference.

It’s good to be wrong. Adding the Glompensator to my 75B made it into what I like to think of as the “poor man’s Shadow 2”. Well, without the awesome trigger. It shoots nice and flat, and is easy to keep on target. What little recoil or muzzle rise it had is now mostly eliminated. With 115gr ammo, even a new shooter had no trouble nailing the target quickly and consistently. And the heavy 147gr ammo was still very much under control. Yes, the pistol has a lot to do with it. But the Glompensator gives it a little edge that I didn’t think it even needed. Another win for Rex Silentium.

Range time with the PSA Dagger

I would be remiss if I didn’t try the Glompensator on a Glock, or at least a clone of one. This was one of my project Daggers, and has seen quite a few rounds, and plenty of upgrades. Just like a regular Glock. It’s got an aftermarket trigger, and a stainless 18 pound guide rod. While it never had any cycling issues, it was a bit snappy to shoot, regardless of ammo. Since it’s one of the pistols we let first time shooters try, I figured we’d install the Glompensator on one. Then we could compare it side by side with the non-compensated one.

Again, the effectiveness of the Glompensator was proven. Rex Silentium even recommends a lighter spring, and it’s easy to see why. Some of the 115gr rounds didn’t want to fully cycle the slide. Stepping up to heavier bullets eliminated that issue right away. In a side by side comparison with my non-compensated Dagger, it was certainly easier to shoot. That “snappiness” was still there, but minimized. As mentioned, I’m a CZ fan, and take little joy in shooting the Glock pattern pistols. But this certainly improved it to where I find myself taking it out more when it’s just me shooting.

With a sample of three pistols, three ammo weights, and some different recoil spring weights, I think this review is comprehensive enough. The Glompensator is definitely an effective muzzle brake for 9mm pistols. One thing is certain, a lighter spring is probably necessary, especially with the lighter rounds. My Canik shipped with the heaviest spring, at 19.1 pounds. I couldn’t find the spec on their lighter spring, but they also make it clear that it’s designed for hotter NATO rounds. At the other end of the spectrum is the CZ, with its 14 pound factory spring, which probably plays a big role in reliability. Then there was the Dagger, with an 18 pound spring.

If your plan is to shoot lower power practice ammo, consider a lighter spring. But if you are shooting heavier loads, and want faster follow up shots, then the Glompensator is a great option. It may still require some tuning via springs, but you’ll have better control, which should lead to better groups, or more speed on steel targets. This is the sort of edge I like when having friendly competitions with friends. If you’re a more serious competitor, I don’t think you can go wrong with it either.

I’d like to thank the folks over at Rex Silentium for providing their Glompensators for this review. It’s regularly priced at $79.50, but on sale at the time this was published for only $49.50, which is a savings of 38%. I’ve already spent several times that in ammo for this review, so hopefully some readers find it helpful. Check them out at rexsilentium.com.