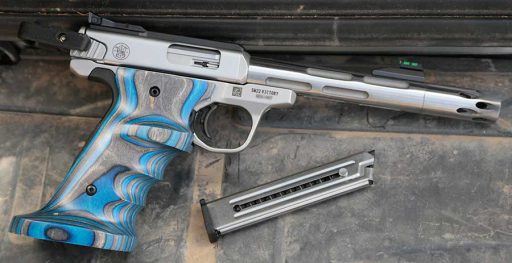 Out of the box, the SW22 Victory is a pretty sweet pistol. The addition of Volquartsen’s I-Fluted stainless steel match barrel and their laminated grips turn it into a fantastic shooter. This is my second SW22 Victory, and my goal was something not just accurate, but flashy and fun. A polished stainless barrel handles the accuracy part, and bright blue laminated grips take care of the flashy. They’re super comfy too, unless you’re a lefty.

This American-made barrel is available unthreaded, threaded, or with a Forward Blow Comp. I chose the latter, as the comp looks great, and will come in handy for timed events. It’s polished stainless steel, with flutes that cut a little weight while offering more surface area to reduce heat buildup. At 6″ long, it weighs about a pound. Threading the 1/2×28 comp on adds 1.5″ to the overall length. For those not using an optic (like me), it’s already tapped for the factory front sight. MSRP for this configuration is $378.

Installation was easy. Clear the pistol, and check it again. Remove the takedown screw found on the underside, forward of the trigger. The entire upper assembly will come off. Remove the bolt first, then back out the barrel set screw. Pull the barrel out and set it aside. Install the Volquartsen barrel, taking note to orient it correctly. Tighten the set screw,  noting that hand tight should be good. No need to use gorilla strength. Reinstall bolt, and then attach the whole upper assembly back to the lower. Tighten the takedown screw tight. If desired, remove front sight from the factory barrel, and install it using the original screw. Otherwise, leave the tiny screw in the barrel to protect the threads.

Volquartsen Laminated Grips for the SW22

First, these American-made grips are not compatible with the S&W Performance Center models. My simple workaround was to buy a second Victory, this time the base model, just so I could install these grips and the barrel. They’re CNC machined from dyed laminate, and are available in blue, red, gray, brown and a brown/gray combo. I chose the blue, since my other Victory has some red accents. Volquartsen thoughtfully includes a extended magazine release as well. As mentioned, they are right-handed only. MSRP is $166.

Installation is pretty easy. After verifying the pistol is not loaded, remove the factory grips. Make sure nothing falls out. Drop the magazine release extension into the left grip, and install it using the original screws, then flip the pistol over. Press in the pins and then carefully install the right side grip. The photo below shows the right side already in place for illustrative purposes. But the left side is installed first, due to the magazine release. Go slow when tightening the screws. Not sure if you can crack the laminate, but they don’t need to be super tight. So don’t overdo it.

Let’s talk about aesthetics for a moment

One of the things that kept me from buying the S&W SW22 Victory for the longest time was aesthetics. I just didn’t think it was an attractive pistol. Especially the grip, which looked like some unfinished afterthought. This one shot well, but I have a stack of great shooters. When I take friends shooting for the first time, I don’t want to offer them some boring, industrial-looking pistol. Or anything tactical. I want something that screams “Recreational shooting is about fun!” at the top of its voice. And I like to have a few without optics as well. Reflex sights are great, but first time shooters should at least learn to line up the three green dots of the factory fiber optics first. With this barrel and grips, most new shooters cannot resist picking it up and trying it out. It just begs to be shot. And of course, no one is disappointed in the results when shooting it.

Our current setup for pistols includes a dueling tree, some resetting steel targets, a couple small gongs, and a tumbling target. From 15 to 25+ yards, it was easy enough to make everything ring. Although the SW22 Victory is no lightweight, the Volquartsen laminated grip encourages one-handed shooting. The contoured grip and wide base help it balance well. Picking off empty shotgun hulls requires just a steady hand – accuracy is only limited by the shooter’s skill. At the time of this review, I had nothing but bulk ammo on hand, so I didn’t bother trying to shoot some tiny groups. That’s not really my thing anyway. If I can hit our steel targets, I’m happy. My experience with Volquartsen barrels has always been that they will shoot better than I am capable of.

For all the good things I have to say about this combination, I do have a minor gripe. First the good though. The grips fit nearly all adult hands, male and female, that tried them. By design, they seem to work well for most users. And the thumb doesn’t accidentally activate the safety.

On the negative side, magazines with the factory base are hard to seat when trying to do quick reloads. They cannot be bumped in with the heel of the palm. The well is just too deep for that. I have some with extended basepads, and they seat positively with practice. But it still requires a deliberate push. The cutout on the lower left of the grip helps. Some shooters bumped the prominent magazine release, but that was more user error than a design flaw. Otherwise, there are no complaints. Well, except for from the lone lefty in the group.

Rimfire shooting is gaining even more popularity for a couple of reasons. First, the cost of shooting centerfire, or even locating ammo, has gotten to be a burden. Bulk rimfire can be had for as little as 7cpr, with match ammo in the 20-30cpr range. Second, there are more and more rimfire competitions popping up. Steel Challenge is becoming much more popular with the rimfire crowd. The cost of entry isn’t particularly high, with a basic rimfire pistol starting under $400. And unlike other disciplines, Steel Challenge doesn’t require running or kneeling or shooting prone. It’s all about how quickly you can hit some steel plates. Which opens it up to a lot of shooters that might not otherwise be able to compete.

This is where this SW22 Victory would shine. Whether shooting it as-is in Rimfire Pistol Irons (RFPI) or adding an optic and shooting Rimfire Pistol Open (RFPO), it’s certainly competitive. Even if that’s not your thing, the Volquartsen I-Fluted stainless steel match barrel and laminated grip certainly turn the SW22 into a formidable plinker. Find them both at Volquartsen.com.

I’d like to thank Volquartsen for providing their I-Fluted stainless steel match barrel and laminated grip for my testing and evaluation. Together, they really change the look and feel of the S&W SW22 Victory.