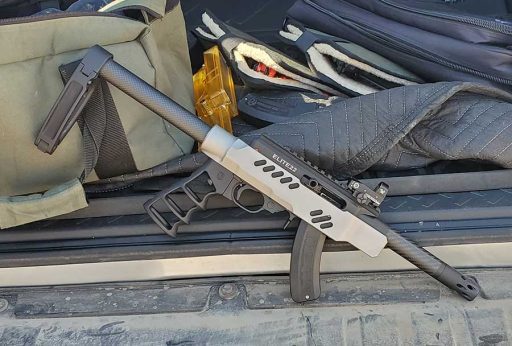 Volquartsen’s VF-6 Lightweight 22 Charger Barrel is great foundation for a no-holds-barred Charger build. With as many chassis companies as there are out there right now, the 22 Charger has become a must-have for many enthusiasts. And when suppressed, rimfire is probably the most fun round of all. It’s also the least expensive ammo these days. So it shouldn’t be a surprise that a compact Charger with a short barrel is super popular. Volquartsen answered that with their VF-6 and VF-9 Lightweight barrels, which have a carbon fiber sleeve to increase rigidity while reducing weight.

This 6″ barrel weighs just 10 ounces, thanks in part to the carbon fiber sleeve. Inside, there’s a thin stainless steel barrel with a laser hardened chamber. At the opposite end, it’s already threaded 1/2×28 for your favorite suppressor too. And it comes with either a nice knurled thread protector, or an optional black anodized aluminum forward blow compensator. I got the optional compensator, just in case my chassis was a bit short. That does add two ounces, but it’s worth it.

When I install a barrel, I usually gently warm up the receiver with a torch, and the barrel slips right in. Before it cools, I drop a bolt in to check the extractor timing. With a carbon fiber sleeve, I’m a bit more careful. The barrel is wrapped in a damp cloth to avoid any heat transfer. Sure, it should be able to stand up to the heat of rapid fire (GSG’s 110 round drum can be brutal), but I’d rather not risk damaging it. In this case, the barrel was such a close fit that I hardly had to warm up the receiver.

Once installed, I let the receiver cool, and then double-checked the extractor timing. That’s one of the keys to reliable cycling. A match grade bolt with an aftermarket extractor is another. With the barrel in place and timed correctly, I can snug down the v-block screws, and finish assembly.

Originally, I was going to use this on my completely stock 22 Charger. Then I remembered that I had an aftermarket receiver just waiting for a new build. So it’s in the Elite 22 receiver shown. Inside, there’s a match grade bolt. It’s got proper headspace, aftermarket extractor, and a cross-pinned firing pin. Pretty standard stuff for my builds. The chassis is a Crazy Ivan Comp Lite, without the rail. It’s also got the Crazy Ivan carbon fiber tube with a Tailhook Mod 1 brace. Although the brace and barrel carbon fiber patterns don’t match perfectly, they do look good together. It’s topped off with a 6 MOA Vortex Venom. All this makes for a 3.4 pound plinker, with the magazine. That’s still under 4 pounds loaded, with the suppressor.

That stubby rear carbon tube isn’t just short to match the barrel. While it offers a decent cheek weld, its that length for a different reason. Running the Tailhook Mod 1 on a tube that short makes it easy to use the brace as intended. Yes, this little beauty can easily be fired with one hand. The way braces were designed. It would be pretty awkward to try to fire it from the shoulder. Not that the Automatic Transmission Fluid guys care… Note that I’ve included some photos below of the same action in a PMACA chassis as well as the Enoch Industries Deep Six. Variety.

With its 6 MOA red dot, this isn’t set up for precision shooting. Instead, it’s more about speed and fun. Despite that, it’s super easy to ring 2″ steel spinners, or keep an empty can dancing until it’s out of range. Since I knew someone would ask, I went ahead and put some 5 round groups on paper. Shooting from a rest at 25 yards, with just the red dot, I was able to keep five rounds within an inch or so. Considering the dot fully covers the center of the target, that’s not bad for me. But this isn’t a precision rifle, it’s a light pistol built for speed and fun. That kind of accuracy is plenty enough to keep one of those big steel “jacks” tumbling end over end.

Suppressed, accuracy was the same, but the fun went way up. This little barrel keeps it light and compact, so another six inches and six ounces doesn’t affect it much. It’s also as close to “Hollywood quiet” as I can get with a semi-auto. I used up plenty of my supply of CCI Standard Velocity ammo with this setup. Few things make grown men giggle like a suppressed rimfire. I should note that it worked flawlessly with all ammo, including bulk Federal and some old Winchester. At one point, I did have some feeding issues, which turned out to be related to the BX-15 magazines I was using. The ten-round ones worked perfect, as expected.

At $340 with the thread protector, or $415 with the compensator, this barrel isn’t cheap. That puts the total build cost at more than a nice centerfire rifle. But if you think dropping over $1k for a plinker (not including the suppressor) is crazy, keep in mind that these aftermarket receivers, barrels, and chassis systems are frequently sold out. I’m not the only one building them. So they are not for everyone, but certainly Volquartsen has buyers. And that’s probably due to their reputation for innovation and uncompromising quality. The fit and finish is outstanding. Under 100 yards, I’d be surprised if it’s not as accurate as some of my rifle barrels. My last attempt to shoot a scoped and braced Charger from a bench didn’t go so well, otherwise I’d give it a try. But that’s not what it’s built for. Ringing steel or plinking cans, it’s dead-on.

Aesthetically, this 22 Charger is as much art as it is a functional range toy. And it’s a good representation of just how far the platform has come. Sure, the barrel cost a few times what my first 10/22 cost. And that $100 was a lot of money to 18 year-old me. Back then, I never would have dreamt of having a carbon fiber barrel (or a suppressor). More than 30 years later, I’m still tinkering with them, and Volquartsen makes these beautiful barrels that offer compact size and light weight, with no accuracy penalty.  And let’s be honest, doesn’t this look awesome with a suppressor? To quote Ferris Bueller, “It is so choice. If you have the means, I highly recommend picking one up.” Check them out at Volquartsen.com

I’d like to thank Volquartsen for providing their VF-6 22 Charger barrel for my testing and evaluation. It’s been a blast (pun intended), and a very satisfying way to burn through plenty of .22 ammo.

Comments? Questions? Have any of our readers tried the Volquartsen lightweight 10/22 or 22 Charger barrels? Feel free to share below.

[…] out there offering all the goods. There’s a multitude of stocks in wood or polymer, to chassis systems that make swapping grips and butt stocks easy. Barrels can be had in different diameters, profiles, […]