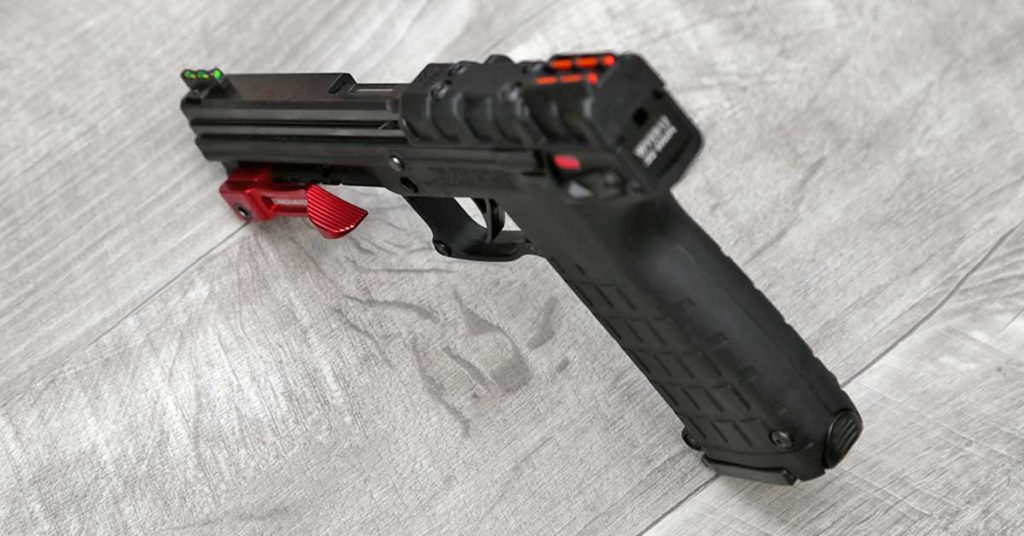 With their new Accelerator Thumb Ledge, TandemKross is on a roll. Many competition shooters prefer a “thumbs forward” grip, and this makes it easy to get one. I’m a huge fan of this shooting style myself, and have added forward thumb rests to a couple of my pistols. This is usually an involved process. For some pistols, there may be a pin forward of the trigger guard that can be replaced, making it somewhat easy. On other pistols, it’s off to a gunsmith for drilling and tapping. But the smart folks at TandemKross came out with a simple, yet elegant solution. The Accelerator quickly and easily mounts on any under-barrel Picatinny or Weaver rail. Its clamp has a single screw, tightened with the included wrench.

Three separately machined pieces of aluminum are combined with a steel screw to form the Accelerator. Total width according to my ruler (who borrowed my calipers and didn’t return them?) is 1-3/8 inches. Length looks to be about 2-7/16 inches. It’s completely flat on the bottom, with the thumb ledge itself having some machined ridges. Color choices are black or red.

When these arrived, I tried them on everything. Shamelessly. Ruger American Competition? Yes. KelTec PMR 30? That too. Ruger SR22 and its sorta distant cousin, the Walther P22? Definitely. CZ Shadow 2? Of course! PSA Dagger, despite being a Glockish clone? You know it. A Canik? Yup. I don’t have any “Tactical” versions of the Ruger Mark pistols, but it fits them, as well as their 5.7 pistol. And the Buck Marks with the rail under the barrel. Taurus owners aren’t left out, as it fits the TX22, as well as some G3 and G2 models.

In case it’s not clear, installation consists of loosening the clamp, and popping it onto the rail. Once in place, tighten it down. Some rails may require that the cross screw be removed so the Accelerator can be slid on to the rail first. Either way, it’s pretty dang simple. As mentioned, TandemKross even includes the correct size hex wrench.

Okay, it was mostly for laughs that I installed it on the P22 and SR22. But it was actually pretty useful for my big hands. The goal is to get another contact point for better control. It also provides a firmer, more consistent grip. There’s probably some logic about the “thumbs forward” pointing more naturally as well. I think I read that long ago. On my 9mm pistols, it was a serious upgrade. My Shadow 2 shoots fast and flat. With the Accelerator, follow up shots are even faster. Same with my Ruger American Competition. On something light like a Canik, I can see it making an even bigger difference for some shooters.

TandemKross did their own testing with a high speed camera. You can view that video below. After shooting centerfire pistols without the Accelerator, and measuring the muzzle rise in degrees, they installed one, and shot more video. Results varied according to the pistol model and caliber, but in each case, muzzle rise was reduced, making it faster to get back on target.

What will the Accelerator do for you?

Individual results will vary, and of course the firearm, caliber, and even ammo variables (bullet weight, +P, etc.) will play into that. If your split times are long due to muzzle rise, this may help get you on target faster. And if you can’t seem to get a consistent, comfortable grip every time, it may make a difference there. Based on my own experience with forward thumb rests on some of my rimfire pistols, this should be a great addition to the Taurus TX22, or other competitive rimfire pistols. It’s not just recoil mitigation, but that pointing and consistency.

Is it worth the price?

Buying the black Accelerator will set you back $59.99, and the red is $5 more. Having your pistol drilled and tapped for a rest is probably about twice that. If you happen to have a Ruger Mark IV, then TandemKross has a solution that’s a little more involved to install, but is also only $55.99. If I had the TX22, I’d get one. For my 9mm competition pistols, it’s a solid choice as well, even though I don’t compete in sanctioned events. I’ll put it another way. We all like to hit our targets. If you like to hit them faster, this is probably worth it to you. For anyone struggling with their grip, who prefers their thumbs forward, it’s also probably worth the asking price.

At the end of the day, I’m just happy that TandemKross comes out with stuff like this. Continually thinking outside the box is the best kind of innovation. There are plenty of shooters that lack the means for an off-the-shelf race gun. Being able to build one yourself, piece by piece, is part of what makes TandemKross great. Their continued support of recreational shooting is important, whether you compete, plink, or hunt. And I’m grateful that they provide me their products to try out and share with my readers. Be sure to check out the wide range of products they offer at TandemKross.com.