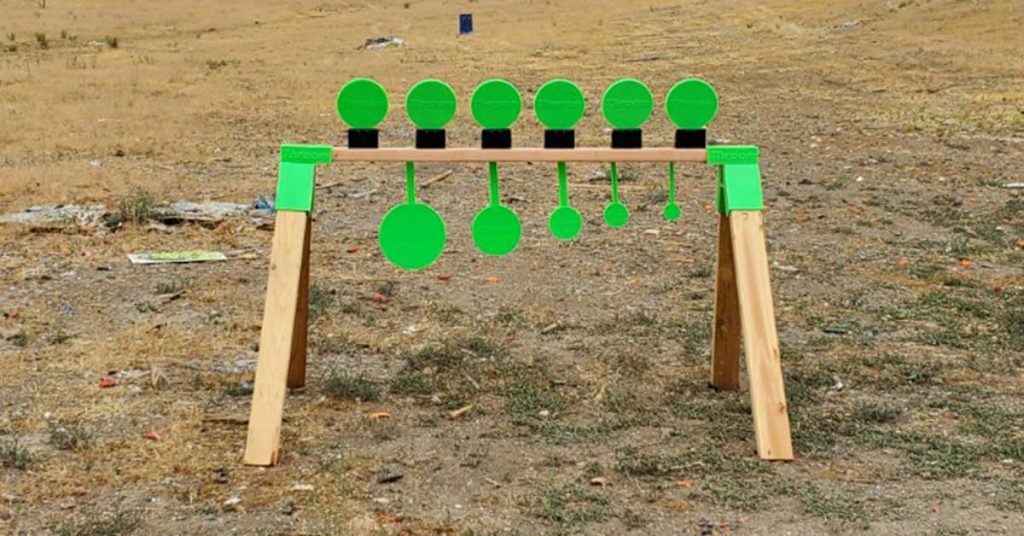 Throom is a company that offers reactive targets made from a self-healing polymer. If you’ve been following this site for any amount of time, you know I’m not a fan of shooting paper targets. I prefer reactive targets, which are usually steel. It’s very satisfying to hear the round strike your target, and see the target move with each hit. Steel has a few downsides though. Weight is one of them. The risk of ricochet is another. Which means that steel targets generally have a minimum distance they can be shot from. This doesn’t guarantee that you won’t get hit by a ricochet, it just minimizes the risk. And while that’s all well and good for rifles, it’s not the best option for pistols. Or when taking new shooters to the range, as they’re not likely to hit too many targets at 50 yards.

Throom addresses these concerns with their targets, which are made of a proprietary polymer called Shoot-Throo™. Bullets pass clean through, sort of opening up a hole on the way, which then closes up (mostly) behind it. So they can be used with rimfire and centerfire, up to some pretty large calibers. They’ll last for thousands of rounds, depending on the caliber. What makes Throom even better is that they have their Alpha Stand Brackets, which are made out of the same material. They look a bit like sawhorse brackets, but are flexible polymer. Combined with some basic 2×4 lumber, it’s easy enough to assemble a portable set of targets that are ricochet-free, unlike steel targets on steel hangers.

Throom states that any caliber rifle or handgun can be used. Avoid hollow points, as that will reduce the life of the target. For rounds traveling over 1.250 fps (think centerfire rifles), targets should be set at least 75 yards out. Any closer, and the round will punch through with little reaction. If you’re shooting something between 750 and 1,250 fps, the targets can be as close as five yards, out to 75. It’s not recommended that anything under 750 fps be used, as well as BB or pellet guns, as that may cause the rounds to ricochet.

For this review, Throom hooked us up with a set of their 6″ round KNOCKDOWN™ plates, as well as their HANGTUFF™ KYL-style hanging targets. This set includes 8″, 6″, 4″, 3″, and 2″ hanging targets made of the same polymer. Combined with the Alpha Stand Brackets, we now have a plate rack and KYL rack, all in one portable unit that’s lighter than steel. It’s also quick and easy to set up. And we can use it at any distance. Which is really great when my friends bring their kids. We can keep the targets closer, and not worry about lead bouncing back at us or the kids.

Originally, I was hoping to try out the BOUNCEBACK™ Series, which bend back when hit, then “bounce back”. But the energy from a .22 LR round isn’t enough to bend them, and the round passes right through. So not much feedback there. Instead, we’ve been using the KNOCKDOWN™ plates, and just resetting them manually. Although you can attach a string if you don’t want to walk back and forth. Because of the closer distance we use them at, it’s not a big inconvenience.

I should mention that Throom offers other targets, and bundles their targets into kits as well. Pepper Poppers area always popular, and they have them in 22″ and 42″ sizes. They also have a dueling tree with six 6″ round plates and an Alpha bracket. All that’s required is some more 2x4s. Their BOUNCEBACK™ and KNOCKDOWN™ Series includes varmints, silhouettes, and even playing card suits. One nice feature is that each target includes a base. But if you already have your bases on a fixed or portable setup, you can leave the bases attached, and just swap targets in and out. So I could remove the plates, and replace them with silhouettes or varmints for rifle shooting.

I’m not going to list all the different prices and kits, as they are always subject to change. Our setup includes a set of six 6″ KNOCKDOWN™ plates and two Alpha brackets, which is listed as $349.99 on the Throom website. We added the HANGTUFF™ targets which are another $89.99. I’ve got more than that in my KYL rack, dueling tree and steel spinners, so it doesn’t seem overly expensive to me. Especially given the obvious advantages.

Throom lays out some suggestions for assembling the rack, including height and width. For my setup, width was constrained by the space in my vehicle. So mine is not as wide as it could be. And I already had four legs of equal length, so it’s also a little shorter. Just know that there is a bit of flexibility in how you set your own up.

I spaced the 6″ KNOCKDOWN™ plates evenly across the top, attaching the bases with the included screws. Then I just snapped the plates into place. Next, I attached the HANGTUFF™ targets from the back so that they hung down, and were spaced fairly evenly, but with the 2″ a little farther out. We use that for sighting in scopes and optics. and that extra room makes it a bit easier to see where the rounds go when we miss. At this point, I broke it all down, and loaded it into the back of my vehicle.

At the range, it’s either two trips for me, or one trip if I have some help. It’s not easy carrying the center piece with all the targets, plus the Alpha stand brackets, and the legs. Once in place, it all goes together without tools though. The plates even have a large polymer adjustment screw, to set their sensitivity. Back it out for centerfire, and in for rimfire. This feature was also handy when we set up on a bit of an incline. I appreciated the ability to fine tune them, based on what we were shooting at the time, and where. It should be noted that we were using .22 LR pistols for most of this review. But we did make some time to knock down the plates with 9mm as well.

As expected, knocking over the plates was very satisfying. Especially when done smooth and fast. What was sort of unexpected was how the HANGTUFF™ targets reacted. Rather than swing back like steel does, they get a little wobbly. Again, very satisfying. It’s easy enough to tell that they have been hit, and if you’re fast, you can hit it again. No need to wait for the motion to stop. We would mostly hit them in order, largest to smallest, practicing accuracy. Then we could switch to speed on the plates. Since we shoot on public land, we only have to worry about making our own firearms safe before resetting the plates. It’s not like we have to wait for a whole row of shooters to make the range cold.

What’s the verdict on this setup?

Even after hundreds of rounds, the Throom targets are hardly showing any wear. Just lots of tiny marks where rounds went through. The 2x4s have caught their share of lead as well. At this rate, these targets are going to last us a few years. More important, they add an element of safety that isn’t always there with steel targets. If you have new shooters, or a shorter range, these are ideal. Yet for longer distances, they work just as well. The only shortcoming I could find was the the very quiet (710 fps) ammo can’t be used. They don’t have the energy to go through, and we’ve already experienced a ricochet with a different brand of self-healing targets. But Throom made that clear up front on their website.

Although my setup is intended to be portable, these are great for fixed locations too. If you have a designated shooting area or range that’s secure enough to leave targets out, you can. Since they are polymer on wood, Throom targets aren’t really going to be affected by weather. In a perfect world, we’d all have a little backyard range, or someplace close by where we can just leave them out and shoot when we wanted. If not, they still weigh less than steel targets (about 1/7th the weight), making them easily portable. They are also perfect for indoor use!

Overall, this seems like a great option that’s going to appeal to many shooters looking for reactive targets that are fun, and without the risk of ricochets. I’d say Throom really nailed it. And I’d like to thank them for providing their targets for testing and evaluation. Check them out at Throomtargets.com.