My very last stop before I left Interbike was at the Boblbee booth. They make the really strong and futuristic-looking backpacks seen in movies like Charlie’s Angels, The Fast And The Furious, and The Italian Job.

I spoke with Jaan, who explained to me that their backpacks were so tough, they met the stringent European standards for safety equipment. Rather than just being a soft backpack  with some closed cell padding to protect your gear, the Boblbee has a hard ABS outer shell. While this is obviously going to protect your gear far better than your average backpack ever will, it also provides an extra measure of safety for the wearer. That may not be a big deal for your average weekend hiker, but I can see this as an added benefit for cyclists, skiers, and motorcyclists.

At that point, Jaan offered to show me just how durable the Boblbee is: 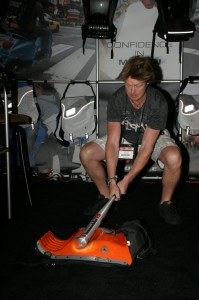 It took me three tries to get that shot, since he was swinging pretty hard. Here’s what it looked like after: 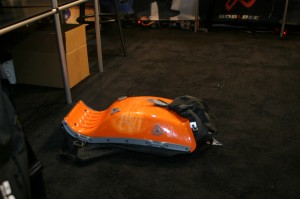 Needless to say, I had to have one. Look for a full review in an upcoming post.