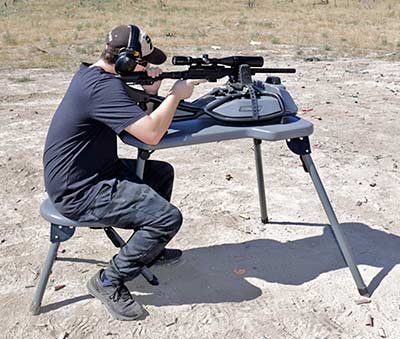 When Caldwell offered to let me try out some of their gear, the Stable Table Lite was high on my list. We have a nice indoor range fairly nearby, but no formal outdoor range as close as I would like. That leaves public land. Our favorite spot is within about a 15 minute drive, and allows us to stretch out our shots well past a couple hundred yards. All that’s missing is a shooting bench. And the Stable Table Lite fits that bill pretty well.

The Stable Table Lite is made up of a plastic top and stool, with folding steel legs. Locking is accomplished via knobs, levers and pins. While this isn’t the most sturdy design, it’s simple, and keeps both the weight and price down. To that end, it does require assembly, which goes even further to reduce the overall cost. The end result is a folding table that weighs less than 30 pounds, with an MSRP of $133.99. Hard to complain about either.

Check the price on Amazon!

With a leg height of 32″, and a seat height of 17″, it fits my 5’10” frame just fine. Dimensions for the table top are 23″ wide by 34″ long. That allows it to accommodate most rifle rests and certainly any bags. Speaking of accommodating, it’s rated for a max weight of 250 pounds.

Putting it all together was easy enough, provided the instructions are followed. I think it took me about an hour, but that included taking a phone call, and checking my text messages. And browsing for music while I worked. In other words, there’s nothing difficult about it. You’ll need some space, time, and the correct tools. Note that it’s a one-person job. Unless you have a shooting buddy with cold beverages. Then it could be a two-person job. I assembled mine in my garage on a warm evening, and would have appreciated a cold drink.

To deploy the table from flat, just loosen the knobs and squeeze the levers. That will allow it to spin/twist all around into the shape of a table, and lock the legs in place. It’s almost as fast to do it as it is to try to explain. Once set up, the seat can be swiveled to either side, for the most comfortable position. My lefty friend really appreciated this feature. I found it useful as well, as we switched from semi-auto .22s to bolt actions and ARs. I wasn’t worried about stuff rolling off the top, as there wasn’t much room for anything else when using a rest. On a later outing with just a bag, there was plenty of room for extra magazines or loose ammo.

There are no provisions to level it, so choose your spot wisely. We didn’t find this to be a problem, but really uneven terrain could be an issue. Even though the top is grey, it still warmed up quite a bit under the Utah sun. To be fair, if you hit 100 degrees with less than 10% humidity, pretty much everything is going to get hot. So I can’t fault it for that. Because frankly, I wouldn’t usually be out on a day that hot. And when we were done, I just loosened the knobs again, squeezed the levers, and it was back in the truck in less than minute. Which is cool.

For precision rimfire work, as well as less-precise AR shooting, the Stable Table Lite was stable enough. It’s definitely on the “enthusiast” end of the spectrum, and not something I’d bring to a competition. Although folks more determined (and lighter) than me could certainly give it a shot. We used it as a bare table, as well as with rests and bags. While a rest will obviously provide the most stable platform, I am equally happy to use it with a bag. That makes it easy to set up and get going. When you have several people taking turns at the table, it makes more sense.

As my first shooting table, I don’t have much to compare it to. And although I am a fan of DIY, I think that this is a good alternative to making your own. It’s light, compact when folded, and does the job when you need a place to sit, and something to hold your rifle. I was on the verge of buying one when Caldwell offered to send this one for my review. For the price, I would not have been disappointed. Would I prefer its big brother, the Stable Table, with its adjustable seat? Yes, because we sometimes have kids and women that are both much shorter than me. But this does the job, and does it at a fair price. Which is what I appreciate about Caldwell – you’ve got options for every budget. Check them out at caldwellshooting.com

Comments? Questions? Have any of our readers tried out either of the Caldwell Stable Tables? Feel free to share below.