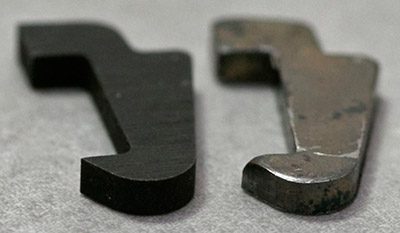 TandemKross extractor on the left, Ruger on the right

Seems as though every new 10/22 owner has the same question at some point: “What are the best 10/22 upgrades?” Well, my best and your best may not be the same. So I’m going to offer up some suggestions on things that get replaced, offer the reasons why, and throw some prices out there too. This is not meant as a comprehensive guide. Consider it more like a primer on how to get the most of out your 10/22, within a basic budget. Some items are strictly about making things easier. Others are for reliability. Finally, there are those that are purely performance-related. Read all the way to the end to find out where to get some of these parts.

Next to ammo, magazines are the biggest “must have” item. For reliability, nothing beats the Ruger OEM ten-round magazine. Ruger also offers the BX-15 and BX-25, as well as the odd BX-25×2. Their ten-round magazines are rotary magazines, and rarely have issues with feeding. All the others are single-stack, and seem to be hit or miss. Mostly reliable, but sometimes, you get one that just doesn’t play nice, with any ammo. Pro tip: look for a 3-pack of magazines, as that will almost always be the best pricing.

Most people are unaware that in addition, Ruger has clear magazines. And a 5 shot rotary. If you’re teaching kids, they even have a single-shot rotary. Yes, a magazine that holds a single cartridge. Shown below are the most common options, including one of my favorites, the coupled magazines. You can read more about that option from High Tower Armory here.

Even brand new 10/22s run into some extraction issues. I urge everyone to try different ammo and magazines, and shoot a few hundred rounds, before replacing anything. If there is a genuine issue (all magazine/ammo combinations), consider contacting Ruger for warranty work. For the occasional inconsistent extraction, an aftermarket extractor is affordable, and easy to replace.

Ruger equips the 10/22 with a stamped steel extractor. And it mostly works okay. My 1987-ish vintage 10/22 is still running the original one. But once they wear down, go aftermarket. They’ll be wire EDM cut from hardened steel, with a nice sharp edge. The factory hook is 90 degrees, aftermarket ones are 89, for better bite. Usually priced from $10-$12, this is a reliability item, and easily replaced. This is probably one of the more necessary 10/22 upgrades. TandemKross Eagle’s Talon Extractor.

There are two steel pins that hold the trigger group in the receiver. On some 10/22s, they have to be tapped out with a punch. On others, they just fall out. When you don’t want them to. You can get fancy stainless pins that are some exact size, which is great. But I’ve noticed some variance with both factory and aftermarket receivers. So the perfect pin set may not be perfect for your receiver.

TandemKross offers their KrossPins. These are pins that seem to be just a hair under the exact size of the receiver holes, but with a ball and detent. So they go in with little effort, but don’t fall out. And they can be pushed out easily. As an added bonus, they also make smaller ones for the trigger group. So if the pin that holds your magazine release keeps falling out, they’ve got you covered. I consider these a convenience item for anyone who takes apart their 10/22 regularly. All of mine have them, since they are only $10 for a pair, or  $5/pair for the magazine release KrossPins.

This is that big fat steel pin behind your bolt. Replacing it is either absolutely required, or hogwash voodoo. Some say that the constant battering of the bolt will cause the holes to enlarge, and crack your receiver. The next guy will point out that his 100k round model from the 60s never had an issue. I suspect that as long as the charging handle spring is working properly, your receiver will be okay. There are two other reasons to replace them though. First, if the current one is either too tight or too loose. Second, if you are planning on using a suppressor.

Aftermarket buffers are made from a variety of squishy materials. They soften the blow, and are generally quieter than steel on steel. Of the three brands that I use, they seem to vary in size. All work, some just fit tighter or looser. And there are some color options. So I use whichever fits best. My advice is to buy from a reputable brand (listed below), and avoid that eBay seller offering three of them for $5. For the nominal cost and ease of installation, buy one if it makes you feel better. I don’t think you’ll do any damage with the factory part, but it’s also one of the least expensive 10/22 upgrades. TandemKross ShockBlock Bolt Buffer.

If you have three hands, skip this part. For those of us with two hands, the factory bolt release is probably on our list of things to replace. To lock the bolt back, pull the charging handle back. Then reach under and find that little bladed thingy, and get it to engage. All while holding your 10/22 with your third hand? Releasing the bolt isn’t much easier. Again, pull it back a bit, reach under the receiver, and struggle. It doesn’t have to be this way. In a perfect world, you could just pull it back, and press the lever to lock it. Releasing it would only require a slight pull back.

This is another inexpensive (under $15 part) that is easy to replace. While it may fall into the “convenience” category, I think it’s also a safety item. The last thing that I want is some kid, or a new shooter, to struggle with keeping their action open. It should be easy to lock in the open position, and easy to release. If you’re a competitive shooter or a hunter, you need this. For everyone else, it adds a small margin of safety. While it’s possible to modify the factory part, there’s no guarantee of proper engagement/disengagement 100% of the time, so I cannot recommend that. TandemKross Guardian Bolt Release.

As far as I am aware, Ruger is still shipping 10/22s with a takedown screw which requires a flat-blade screwdriver. Nothing wrong with that, if you have a proper hollow-ground screwdriver. For the rest of you butchers mangling that screw, just stop. Please. A regular tapered screwdriver damages the screw, and will eventually strip it. Or at least make it look ugly.

For about $10, replace the screw with a socket cap screw. The kind that uses a common hex (AKA Allen) key. You’ll probably need to buy one specifically for a 10/22, as even Ace Hardware may not have the exact size. It shouldn’t be threaded the entire length either. And when you have a socket cap screw, you can use a torque wrench to find just the right torque for best accuracy in your factory stock. This falls into my “convenience” category, but can also help enhance accuracy.

This is probably the first item on the list to break the $20 barrier. Some 10/22 owners have issues with light strikes. That’s where the firing pin doesn’t hit the primer hard enough to cause ignition. Just clicks, no boom. If this is an issue with a new rifle, and happens with a variety of ammo, I’d suggest warranty work. Well, maybe also check the v-block, and that your barrel is seated properly. But those are rare instances.

So you could spend $20 or more on a new firing pin. Or to replace a worn-out one. Some folks will replace it and the extractor on a new 10/22. Personally, I would just buy a whole match-grade bolt assembly instead, although that may be more than most want to spend. But if you just want to make your gun go bang more consistently, try a new firing pin. They are harder steel for longer life, and will either be sharper, or more blunt, depending on who you buy from. But the aftermarket ones will work better. Essential if yours is defective in some way, but not really a “must-have”. A clean and properly assembled firearm should not have light strikes. TandemKross Fire Starter Titanium Firing Pin.

This right here is the Coke or Pepsi of the 10/22. Some swear by the short and stubby ones, others only use the ones that wrap around the trigger guard. Old-school owners have a flush-mounted one that doesn’t stick out at all, and consider the rest of us spoiled. They can be found in machined aluminum, or 3D printed. And they are priced accordingly. Personally, I like the paddle type that are just bigger than the factory one. And make mine aluminum.

It’s your 10/22, so go crazy here. But keep in mind, the extended releases that wrap around the trigger guard are not not always compatible with pistol grips. Got a factory stock, or fancy thumbhole? No worries. Bought a chassis and want to use an AR-style grip? You may find that the longer release doesn’t work so great. I’ve seen them from as little as $15 to as much as $35. Easy to install, and they will make reloads more convenient. TandemKross Fireswitch Extended Magazine Release.

This concludes what I would consider to be the common upgrades for 10/22 pattern firearms. I’m going to do a follow up to this, where I cover the more expensive upgrades, such as match bolts, and aftermarket triggers, barrels, and stocks. While everything listed here is well under $100, the other items are the opposite. Most start around $100, and go up. There are also some more specialized parts that may get their own article too.

Two of the biggest aftermarket companies are TandemKross, and Volquartsen. I am not going to recommend one over the other. They both support the industry by sponsoring shooters, which I think is great. TandemKross does have an affiliate program, so if you use this TandemKross link to make your purchases, I’ll get a small commission, which helps to cover my hosting bill. It pays to sign up for their mailing list, and get notified of sales, specials, and free shipping offers. Do the same over at Volquartsen, as they offer free shipping for anyone on their mailing list. Neither will spam you, and their emails are infrequent, but have valuable information. And you’ll be supporting companies that support our hobby/sport.

If you have any questions or feedback on 10/22 upgrades, feel free to comment below, or use the contact page to reach me. I’m happy to answer any questions.