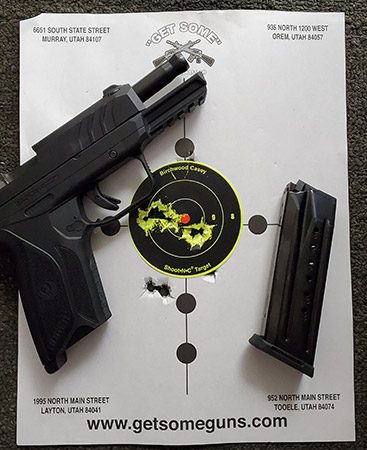 Both the Ruger PC Carbine and PC Charger are compatible with the Security 9 magazines. Since I have both of the PC variants, I figured I should try out the Security 9, as it seems like the ideal companion sidearm. For those not familiar, the PC Carbine is a 9mm Takedown rifle which can use either Ruger or Glock magazines. And the PC Charger is the compact version – bigger than a handgun, but smaller than a rifle. The Security 9 is a traditional 9mm handgun, available in both compact and full size. Capacity ranges from 10+1 to 15+1. Although my Carbine is currently set up for Glock magazines, the idea of sharing magazines across all three platforms* does carry a lot of appeal for some users, myself included.

Like so many of today’s handguns, the Security 9 has a glass-filled nylon frame. Sitting on that is a black oxide, through-hardened alloy steel slide containing a 4″ barrel. For longevity, reliability, and accuracy, the interface between the slide and frame is aluminum. Specifically, it’s got full length machined guide rails that are hard-coat anodized. Under the barrel is a railed dust cover, for a light or laser. Overall length is 7.24″, and it weighs a reasonable 23.8 ounces. In my opinion, the size and weight strike a good balance. It’s not too big to conceal, and not too small to be difficult to shoot well.

Serrations on the slide aid in cocking the Security 9. They did miss the trend of the ledge on the rear sight for racking against a hard edge or belt. Instead, the sight is nicely ramped front and rear, for snag-free use. As far as the rest of the gripping surfaces go, I think Ruger really knows their target buyer. If this pistol was marketed towards law enforcement or competition, I could see something more aggressive. Rather than go that route, the grip and backstrap have some texturing that leans more towards comfort and easy carry. Overall, it feels good, if slightly small, in my 2XL hands. People with normal-sized hands should find it quite nice.

Prior to testing out this pistol, I wasn’t familiar with Ruger’s Secure Action™ fire-control system. Honestly, I don’t pay too much attention to internal components. If the trigger feels good, I’m happy. But this system provides a protected internal hammer with a bladed-safety trigger. Yes, an internal hammer, not a striker. That’s why it’s easier to cock, and has such a nice trigger. Also, it’s claimed to be both safe and reliable. Since I’m not in the habit of dropping firearms to see if they fire, I didn’t test this. But I can confirm that the trigger has a much better feel than I expected for a firearm that carries a $379 MSRP. That’s a win.

I chose the base model, without the tritium night sights. Instead, these sights are a white U outline in the back, with a white dot up front. They provide good visibility against the matte black finish, and are easy enough to pick up quickly under most lighting conditions. Although the front is fixed, the rear is adjustable by drifting. Since they are both dovetailed in, it’s also easy to swap them out for other options. And Ruger is happy to oblige, with several available at Ruger.com. They’ve got black, yellow, orange, fiber optics, and tritium. The Pro model includes the tritium sights and an extra magazine. To “upgrade” this base model to the Pro version’s sights and 3rd magazine would only cost $10 more than the Pro’s $549 MSRP.

Coming from another brand (that does NOT rhyme with block), I was immediately pleased with the grip and grip angle. Thanks to the slightly undercut trigger guard, I could just fit three fingers around the grip. My wife also really liked the grip, which is important when trying to introduce new firearms into our home. It’s a full 9 ounces less than our usual carry pistols, which was another plus. What I didn’t initially like, is the width of the frame compared to the trigger guard. I’m used to that being more angled, with a smoother transition as my trigger finger goes from the frame to the trigger. After some time at the range, it turns out this is a non-issue in actual use.

The only other item that I could possibly complain about is the magazine release. It’s pretty small, and I have to shift my grip ever so slightly to manipulate it with the thumb of my strong hand. Will that matter in real-world use? Probably not. This isn’t a competition pistol, so that’s not a concern. And if I’m in a defensive situation that requires more than 15+1 rounds, I’ve got bigger problems. After more consideration, I suspect that this is another concession to the intended buyer of this firearm. First-time buyers, or those that don’t have a lot of experience, probably don’t need a giant magazine release. This could prevent them from accidentally ejecting the magazine at the wrong time. But it will fire without a magazine in place.

That trigger blade safety (known to most as the “dingus”) – do I love it? Nope. But I appreciate it. There is a manual, frame-mounted safety as well. And I picture some design engineer and corporate lawyer arguing over it. Lawyer insists on it. Engineer rolls his eyes and points to the trigger’s safety. Finally, a compromise is reached. The tiniest safety lever is fitted, pivoting at the front. Engaging it may require both hands for those with small hands and/or a weak grip. I certainly can’t thumb it on to “safe” with the knuckle of my thumb. But thanks to the pivot point being in the front, it’s easy to disengage. Anyone following the rules of firearm safety, and understanding the blade safety, will most likely leave it in the down “fire” position. As far as I am concerned, the Secure Action™ fire-control system renders it all but unnecessary.

With its good ergonomics, and a trigger far better than the price would suggest, shooting the Security 9 was uneventful. I managed to take it on a few range trips, both indoors and out. Nailing a 10″ gong at 30-40 yards outside was satisfying. Our indoor range is limited to 25 yards, so I mostly set up silhouette targets at ranges from 7 to 15 yards. Despite being what I consider an entry level handgun, it was actually really easy to shoot well. I’d be totally comfortable using this as a defensive piece. I had the end lane on one outing, and it’s noticeably darker, making the sight picture less than ideal. Yet I was still able to put rounds where I wanted.

Recognizing that 7 yards is a standard that most people can relate to, I made sure to shoot many groups at that distance. With cheap 115 and 124 grain range ammo, I had no trouble keeping five rounds within about 1.5 inches. Pushed out to 25 yards, those groups opened up to between 4 and 5 inches. Still respectable enough. I wouldn’t be shooting any matches with it, but out of the box, it exceeded my expectations. For a defensive firearm, it will get the job done. If it’s just a range toy, it won’t disappoint, given the attractive price.

Giving it a field strip should be simpler than it is. Most of my other 9mm firearms require no tools to take down. For the Security 9, drop the magazine, and verify that it’s unloaded. No need to dry fire it. Pull the slide back a bit, and remove the pin. Except, you can’t use the base of a magazine to push the pin from the right side. And you can’t just pull it out. It requires a screwdriver or something similar to pry it out a bit first. Once the pin is out, pull the slide off. Really, it shouldn’t require any tools. But it’s not a deal-breaker. Just a little odd.

Once apart, it’s easy enough to clean. I just gave it a quick wipe for the photos. Even with some of the cheaper ammo we used, it wasn’t that dirty. Cleaning won’t be a chore. Given today’s ammo prices, I don’t think they’re going to see more than a few hundred rounds at a time, if that.

Many enthusiasts consider the Security 9 as a competitor to Glock. I guess I don’t see it that way. It’s made in America, with a street price that’s probably just over half what a Glock would cost. As long as I’m sharing my opinion, I find it better looking, and more ergonomic. It seems targeted (see what I did there?) at someone looking for a reliable firearm that’s still very affordable. Basically, for not much more than an entry-level brand’s price, you’re getting solid Ruger quality.

Between myself and a few friends, we put around 500 trouble-free rounds through this pistol. I don’t have an exact count, as it overlapped my PC Charger review, and while I earmarked 800 rounds for the two, some of my friends provided their own ammo. None of it was reloads, but most of it was inexpensive range ammo, with some aluminum Blazers thrown in. The Security 9 cycled it without fail, and hit where I pointed. Before my loan period is up, I’ll take it out a few more times, but I’m leaning towards keeping it as it’s definitely the companion pistol to the PC Carbine and Charger that I hoped it would be. Check it out at Ruger.com.

Comments? Questions? Do any of our readers own the Security 9? Feel free to share below.