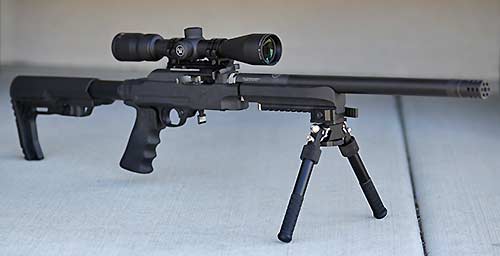 10/22 Takedown built on a Brownells receiver

What a learning experience this has been! I thought I could just buy a Brownells receiver, add some quality parts, and have an awesome rifle. But it’s been something of a disappointment. I’ve spent a lot of time polishing the inside of the receiver, and still have some reliability issues. It doesn’t always cycle smoothly, which causes a few extraction/ejection issues. The action just seems sluggish. That’s after replacing the aftermarket bolt with a factory one, and using a new charging handle. I also installed a Ruger BX trigger, because there’s no sense wasting a nearly $300 performance trigger on this rifle.

I’m not saying that all Brownells receivers are bad, I’m saying mine’s not great. Azimuth Technologies makes good stuff. And only having built one, it’s not fair to assume that they are all this bad. But it’s a non-returnable item that doesn’t work well, even after a lot of time and effort. With shipping and FFL fees, I’ve got about $110 into the receiver. Every other aftermarket one is nearly double that, or more. So lesson learned – don’t skimp on your receiver, or lower your expectations.

Despite the reliability, which I will continue to try to improve, the rifle looks great. So if I can get it to cycle better, I’ll be very happy. I’ve topped it with a Vortex Diamondback Rimfire 2-7×35, which seems to be a good choice. I also added a Bastion extended magazine release, which has an American flag engraved on it. This is a nice little touch. Across all my 10/22 variants, I have 4-5 different magazine releases, and haven’t chosen a favorite yet.

When I started this project, the goal was to make a 10/22 with adjustable stock, for different users. Because it may end up as a suppressor host, I also wanted the left side charging handle for clearing potential jams with low-velocity ammo. This was accomplished with the Advantage charging handle and picatinny rail from TandemKross. (Look for a review on that separately). The whole setup is still viable, but perhaps with another receiver. I’ve still got some money left in the budget to throw at this, if necessary.

I was expecting it to be accurate with the Tac-Hammer barrel, and it has not disappointed. I had a small window of opportunity to run some ammo through it out to 50 yards. As much as I wanted to try several brands, we simply didn’t have the time. Using the same bulk ammo (Federal) used for breaking in the barrel, I gave it my best effort. Although there were no horrible groups, even the best ones were ruined by a flyer. While the BX trigger helped a bit, I don’t think I’ve tapped the potential of this barrel. In the image below, you can see the best group was very tight, with a flyer opening it up to 0.457 (after subtracting .225 for the bullet diameter), which is just under 1 MOA for 50 yards.

Proper accuracy testing requires more time, better conditions, and a variety of ammo to test with. Not to mention a competent shooter behind the trigger. And as we all know, my rifle won’t necessarily shoot like yours, even with the same components. This wasn’t meant to be a match rifle though, it only needs to be good for 1″ and 2″ steel spinners out to about 50 yards. And it does that with bulk ammo easily enough. Given that, I’m not sure if it’s worth the time and effort to test for a “favorite” ammo. But I may revisit the accuracy issue when it warms up. I’m just happier to hear lead on steel, as opposed to obsessing over tiny holes in paper.

It cycles well enough with factory magazines, but not with aftermarket ones. And there were maybe one or two out of 25 rounds giving me trouble with a failure to fully extract. This isn’t a huge concern, but something I’ll continue to look into. I have a 110 round GSG drum, which I used for reliability testing. Even my Charger can rapid-fire 100 rounds without failure. This rifle refuses to play nice with the drum. I cannot get two consecutive shots without a failure to feed, or failure to eject. Whether that’s due to the receiver or the drum remains to be seen. But the drum works fine in three other rifles. In my opinion, a reliable rifle (not a match rifle) should be able to cycle nearly any ammo, out of all factory and quality aftermarket magazines. So there may be a follow up if I can improve reliability.

There is a bit of compromise with any takedown rifle. We’re giving up potential accuracy in exchange for actual convenience. And a takedown that has acceptable accuracy is mighty convenient. If you’re building a rifle for hunting, plinking, target practice, or as a “truck gun” or part of your bug out bag, they have their place.

I really like this takedown, as it fits into my Copper Basin backpack (review coming soon). If I’m headed to the range after work, I can pack my rifle, magazines, spare ammo, and hearing protection into one small backpack. It’s the same when shooting outdoors. One bag with everything in it, plus room for two water bottles. My regular rifles have their own bags, which look like firearms cases, not backpacks. And I’d still need to bring a range bag. So this really wins on convenience.

While I like how this rifle is set up, there are still plenty of ways to further customize it. The grip and stock are easily swapped out. I can replace the bipod with a forward grip, flashlight, or laser (not really, I don’t see the need for either of the last two). The rail can be attached to the barrel, and I can move my scope. Or I can swap the scope for a red dot or similar optic. It might get a better trigger at some point too. Let’s be honest: If you hate money, a custom 10/22 is an easy enough way to burn some. But first, it needs to be able to perform better.

So what’s the final verdict?

I like this build. As I looked at my pile of spares, I pictured it almost exactly how it sits right now. The magazine release is the only part I hadn’t planned on originally. Am I disappointed that it’s not as reliable as my others? Of course. That was one of the main goals. But I like to tinker, and I’m persistent. Perhaps it just needs a few hundred more rounds through it. So I’ll keep at it until it works as well as a .22 can be expected to work.

At the beginning of this series, I mentioned an aftermarket bolt and trigger. Remember them? Yeah, I already have another build in the works, and this one actually cycles flawlessly. And shoots sub-MOA. With zero Ruger parts.

Anyway, if you have any questions or comments, feel free to share them below.

A special thanks to Adaptive Tactical for providing their Tac-Hammer barrel for testing and review. And to TandemKross for their Advantage charging handle. Individual articles for each of the components in this series can be found here: