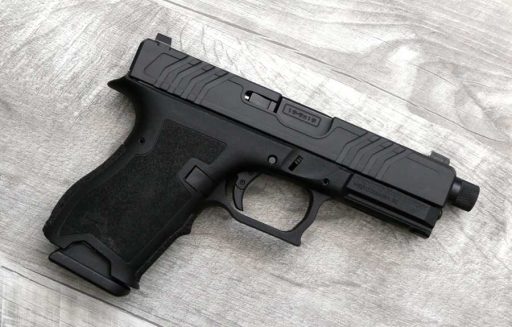 Next up in my PSA Dagger Glock 19 clone project is the G19 Gen 3 from Tactical Kinetics. While the Dagger is available as a complete handgun for as little as $299, I’d much rather spec my own slide and barrel. I suspect many others will too. This DIY route means buying the complete $99 grip frame, and then topping it with a slide of my choice. For some, that may allow them to build on an absolute shoestring budget. Get the frame, then the barrel, then a slide, and all the internal bits. Several steps up from that is this Tactical Kinetics build. It’s made from better steel, includes usable sights, and has a threaded barrel.

The full product name is the “G19 Gen 3 Standard Slide Assembly w/Threaded Engraved Barrel“. Tactical Kinetics starts with a 17-4 stainless steel billet and machines their slides into what you see above. This is the basis for a very durable handgun. If you plan on shooting a lot of rounds, or just want an extremely reliable pistol, start with 17-4. Each slide is then through-hardened before being given a salt-bath nitride finish. Looks great, super tough.

Inside that slide is a Tactical Kinetics engraved and threaded 416R stainless steel nitrided barrel, topped with a knurled thread protector. And it’s finished off with their own slide completion parts kit. On top are some basic but perfectly serviceable white dot metal sights. All this is fully assembled by Tactical Kinetics. They promise “superior fit and accuracy performance that surpasses Glock specifications”. Retail price is currently $395, and you can get 10% off by signing up for their mailing list.

Tactical Kinetics does not recommend +P, lead bullets, or reloads. In exchange, they offer a 1 year warranty which covers the materials and workmanship of their barrels. That’s all fine by me, as I’ll save my hot ammo for other pistols.

As I look at the machine work on this slide, I find it more appealing than an OEM slide. Angled cuts fore and aft give it extra visual appeal, but also plenty more traction for racking the slide. They are deeper near the top of the slide, getting shallower as they get closer to the frame. They’re part of a large recessed panel on either side, which breaks up the rectangular-ness of the slide itself. Too often, there are design features that are either aesthetic, or functional, but not both. Tactical Kinetics found the right balance here.

Continuing that theme is some beveling on the top edges. This starts at the muzzle end, gradually tapering as it reaches the ejection port. From there, it remains consistent to the back of the slide. Not a huge departure from what you might find on an OEM slide, but a nice distinction. I get the impression that these are not churned out as quickly as others are. And I think that sums up Tactical Kinetics pretty well. Rather than make the cheapest product that works, they improved on the ergonomics and looks of a rather mundane but effective design.

My Tactical Kinetics G19 slide assembly went right onto my Dagger frame without any issues. I feel like there should be more to this part, but really, there isn’t. Dry firing and function testing confirmed it was working as expected. If I ever run into a problem, then I might have more to write about.

I managed to get some time both outdoors on steel, and indoors at the “paper” range. Hitting my 4″ steel spinners at seven and ten yards was easy enough, but admittedly doesn’t tell the whole story. Indoors at seven yards, I was able to put 10 rounds into what was roughly a large ragged hole. At ten yards, I’m still keeping 5 rounds inside a 2″ circle. That’s with the PSA trigger. It might be hard to quantify the performance of a barrel when paired with a bad trigger, but it really isn’t that bad. The Tactical Kinetics G19 slide assembly fed, went bang, and spit out every round just fine. With great results on paper.

As I write this, I realize that I might need to revisit this combination, once I’ve upgraded the trigger. But there is no doubt that the barrel itself is going to provide more than sufficient accuracy. And the slide just looks great, plus it’s easy to manipulate.

In a perfect world. I would be able to put five hundred or a thousand rounds through a firearm as part of a review. At today’s ammo prices, that would cost more than the firearm itself. Instead, I have to settle for a few hundred rounds. But given the tight tolerances, quality materials, and attention to detail, I have no reason to think that this barrel and slide combo won’t hold up well over time. If you’re building a pistol, or upgrading one, this is a solid choice. Check out the Tactical Kinetics G19 slide assembly, as well as their other products, at TacticalKinetics.com.