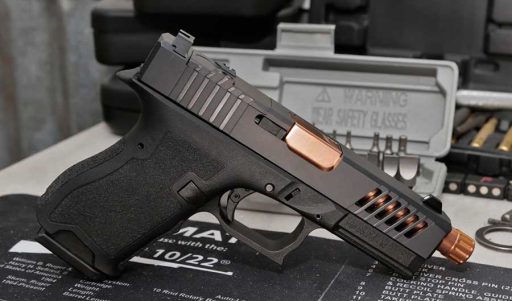 My PSA Dagger Glock 19 clone project is starting to feel like Groundhog Day. This is my third build, and some details are a bit repetitive. What’s new though is this sweet custom slide and PVD coated barrel from STS Firearms. As mentioned previously, I decided to forgo the complete $299 Dagger, and instead spec my own slide and barrel. This seems to be the route many others have taken as well. I’m still starting with the PSA $99 complete grip frame, just topping it off now with something definitely not from the bargain bin. I’ve already covered a “shoestring” budget build, and what I would consider a mid-tier option. This one is another step up, and the one I will be using when I upgrade the trigger later.

Before I get into the parts, it probably makes sense to provide some background on STS Firearms. They’re a branch of Superior Tool Service. This company has decades of experience in machining technology, including PVD coatings. It makes sense that if a coating improves the durability of the tools used to make things like firearm parts, that same coating could be applied to the parts as well. So in addition to offering some very precisely machined components, they are experts in PVD coatings.

Physical Vapor Deposition is a complex industrial process where a coating is applied in a heated vacuum chamber. Imagine metal being vaporized into a gas, and then applied as a film to the component being treated. The result is a durable finish that is so thin (3 microns), it doesn’t interfere with the function of moving parts. At the same time, it’s got greater wear resistance, less friction, and increased lubricity. Translation: your firearm requires less overall lubrication to run smoothly, and will be easier to clean.

PVD finishes are available from matte to a high mirror polish. So it’s suitable for a full range of firearms, from tactical to attention-grabbing race guns. The cool color options are just an added bonus. They include gold, copper, blues, and the “oil slick” rainbow, among others. For a carry arm, the matte blue might be ideal. Conversely, I could see a competition pistol with the rainbow slide and gold barrel. With 12 color options and four finish options, STS lets you have it your way.

For this project, STS Firearms provided their Glock 19 Gen 3 compatible 9mm barrel, with a copper PVD finish. They also included one of their ported and RMR cut slides with a PVD ALTiN Dark Slide finish and matching cover, which helps show off that sweet barrel. As you can see in the image below, the threaded barrel is highly polished, and has a flawless finish. They cap it off with their own matching thread protector, for a look that really stands out.

The slide itself has some subtle details. Sure, there’s the porting up front, and some deep cuts for traction. But their surfaces has been given a little polish time, as have the beveled edges of the slide. The rest is matte finish. That adds a bit of visual appeal without compromising functionality. No sights were included (it’s got an optics cut), and I needed to source my own slide completion kit. While that’s a departure from the other two slide/barrel combinations I have reviewed, it does make sense. The buyer can spec their own parts this way. Most completion kits are priced the same. For sights, a sub-$30 set might be fine if a reflex sight is being installed. If not, there are plenty of options for all budgets and applications.

Since I plan on installing an optic at a later date, I went with some fairly generic sights. They’re three white dots, and glow when exposed to a light source. Nothing special, and they took a bit more fitting than they should have. With the sights installed, I finished the slide with an equally generic completion kit. This too will be upgraded at a later date, but I wanted to get it together so I could go shooting. As expected, the slide assembly went right on to the PSA Dagger grip frame without issue. A quick function check confirmed it was ready for the range.

It’s no secret that I am not a fan of the original Austrian pistol. Mostly, it’s about ergonomics, but the factory trigger (and my preference for hammers), plays a role too. With the PSA Dagger, the grip is infinitely more comfortable for me. And since I’ve had the S&W Shield in my EDC rotation for many years now, the trigger is very familiar to me as well. Actually, it also doesn’t hurt that this is my 3rd PSA Dagger build, so I’ve had plenty of trigger time. Couple that with the quality STS Firearms barrel, and shooting this combination was boringly easy for me.

As with the other PSA Daggers, I shot them outdoors on some steel, and indoors on paper. My 4″ spinners are set at seven and ten yards. Alternating between them is a good challenge for me, and I might need a third, as it’s possible to have both spinning at the same time. Switching things up, I went to the indoor range on a rare (for me) day off. At the standard seven yards, a full mag dump at slow fire just leaves a messy hole in the middle of the target. Moving out to ten yards, they’re still all within about two inches. I shot some five round groups so I could see the spread, rather than just a large hole. And at 25  yards, I can keep every round within 8″, which is acceptable for my shaky hands and questionable vision.

There’s no question that the STS Firearms slide and barrel are quality products. As to whether or not they are held back by the trigger, that’s up for debate. I’m satisfied with the performance as it is, since these builds are just weekend range toys. Eventually, I will do some upgrades, and get outdoors when it warms up, so I can shoot at more than 25 yards. It’s in my nature to tinker and improve things, and firearms are no exception. In the meantime, the STS Firearms barrel and slide look great, fed all the 9mm ammo I had on hand, and I hit the target every time. If I was looking to build a carry firearm, or a competition one, I wouldn’t hesitate to consider them. Check them out at STSFirearms.com.