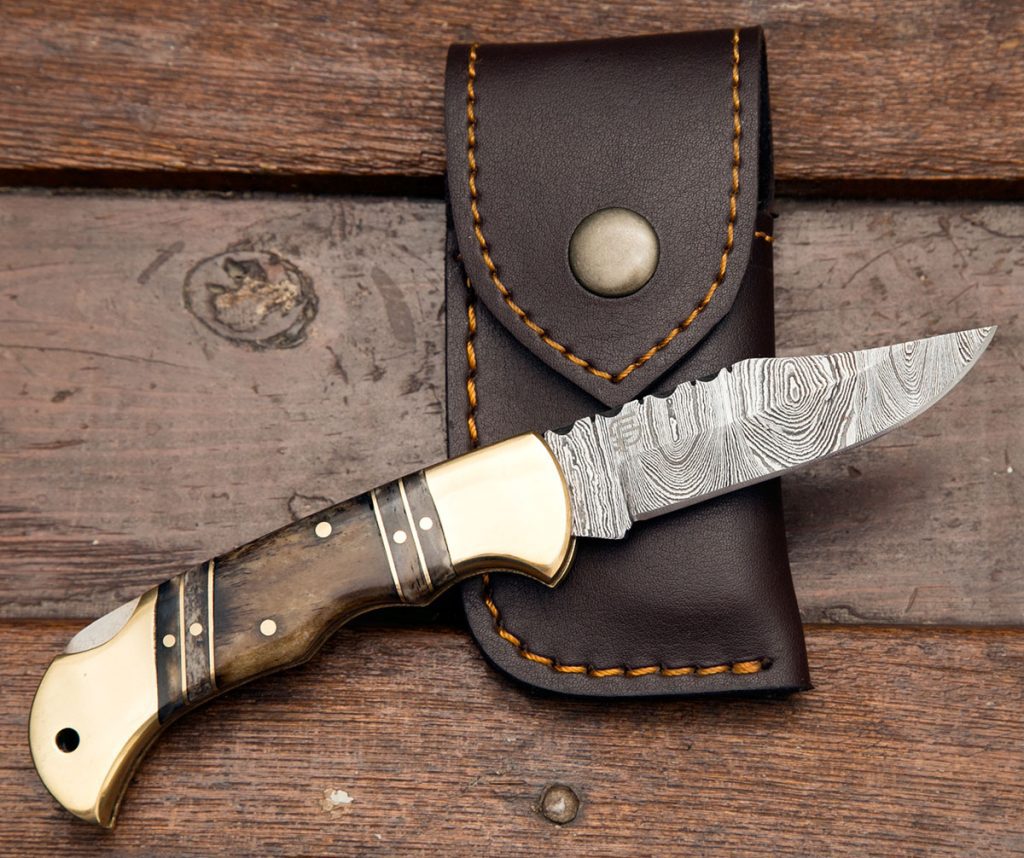 There is so much to like about the Hemingway Handmade Damascus Steel Pocket Knife from Forseti Steel, I’m not sure where to start. The steel, materials, design, and even the name resonated with me from the first time I saw it, I knew I had to get a closer look. And since Forseti is a local company to me, I had one in my hands about two days after seeing it on their site.

Inside the cardboard shipping box was a nice little wooden box. It contained the Hemingway, and a simple, but attractive leather belt sheath. Despite the high quality photos on the Forseti site, the Hemingway looks even better in real life. And even though I read the specs, it was a bit smaller than expected. Not in a bad way though. It’s a pocketknife, and sized accordingly. The blade opens smoothly, and locks up solidly, which was my experience for the duration of the review. I grabbed a sheet of paper, and was able to shave some curls off with ease. So it’s delivered with a decent edge. It also retained that edge during nearly two months of light use.

Made from 1095 high-carbon steel, this pattern-welded Damascus blade has 256 layers. With Damascus, fewer layers can create a bolder pattern, while too many layers might result in a barely visible pattern. So 256 strikes a good balance, with a plenty of contrast and texture. This provides a very distinctive (and individualized) look. No two will be exactly alike.

As mentioned, it’s three inches long, and 4mm thick, with a classic drop point. There are some cuts along the spine that contribute even more visual interest to what is already a knife that begs one to take a closer look.

All the visual appeal of the blade isn’t enough to detract from the handle. At either end is polished brass, with stained bone and brass spacers plus pins filling in the middle. If you’re someone who only wants to see perfectly machined lines, this is not for you. The Hemingway is handmade, and it’s quite the opposite of perfection. Instead, it should be appreciated for the work that went into fitting the bone and brass together. Again, this is what makes them unique. Like the blade itself, no two handles are alike. Each Hemingway is as original as its owner.

Let’s be honest – despite being a pocketknife, you’re probably not going to carry the Hemingway in your pocket. I wouldn’t want mine banging around my keys and spare change. If you’ve got an unencumbered pocket, you could carry it that way, but the belt sheath is probably a better choice. It’s a simple design, maybe a little retro even. Warm leather, contrasting stitching, and a button with an antiqued finish. Both fitting and befitting the knife it’s designed to hold. When I first tried it, buttoning it shut was not so easy. So I left it in there for a while, and the leather seems to have taking a liking to it. It’s a nice, rattle-free fit. Note that the loop on the back doesn’t have much slack. Works fine with a traditional leather belt, but a tactical style buckle, like a Cobra, is a no-go. Not that you would.

I’ll readily admit that the primary purpose of the Hemingway, at least when I first got it, was just showing it to my friends. Watching others give it a good once-over, admiring the blade and handles, was its one job. Eventually though, I put it to work. I’ve used it to cut and score the sheets of cardboard we use for homemade targets at the range. It’s opened plenty of boxes and letters, with ease. Because it needs to be kept oiled, it hasn’t been used for food prep of any sort, other than trimming corn before putting it on the grill. Overall, it’s been as handy and useful as any other pocketknife.

The more I used it, the more I realized that it wouldn’t get used the way some of my other knives have. It won’t be used to cut up sod, or strip wire. I won’t poke the lump charcoal in my grill with it either. Not because it’s not durable – I’m sure it is. But this is more of a gentleman’s knife than a tool. And then I thought, what would Ernest do, with this knife named after him? Notch a cigar (also named after him)? Slice some bread and cheese while enjoying a glass or two or three and watching the bullfights?

While researching for this article, I located a reproduction of the actual knife Hemingway carried. It had a bone handle as well (stag, actually) and two blades, plus a saw. And it should go without saying that it included a corkscrew too. It’s also got an $1,100 price tag. So I’m happy to stick with this modern interpretation of what he might have carried. After all, he was known for his pen, and penchant for drinking, and beard, and cigars, and love of women and bullfights. He was not known so much for his pocketknife.

In that context, this knife carefully straddles the line between a light duty tool, and a little piece of collectible art. It’s functional and useful, yet attractive without being pretentious or shallow. Yes, there are imperfections in the handle. Because it’s handmade. And the Damascus pattern may not suit everyone. But the price is $94.99. I reached out to a friend that is fairly well-known for his custom blades, and asked what he charges for Damascus. If you want a custom Damascus knife, his price starts at $100 per inch. And that’s just for the blade. Which certainly puts the Hemingway into perspective for me. It checks a lot of boxes (Damascus, unique, handmade, attractive) without breaking the bank. If you feel the same way, or just want to check out the other interesting knives they offer, head over to ForsetiSteel.com and check out the rest of their product line. You won’t be disappointed.

I’d like to thank Forseti Steel for providing their Hemingway knife for my review and evaluation. It’s an interesting knife, and I’m glad I was able to examine it and use it for a few weeks.