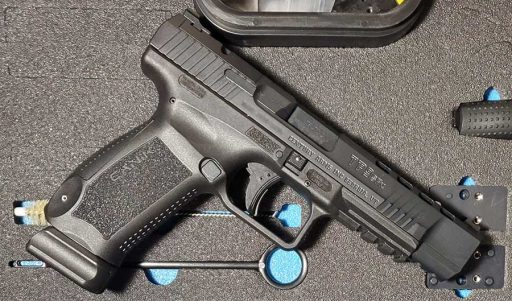 Anyone into handguns has probably noticed that Canik had attracted quite the following lately. And this was for their newer pistols, not just the CZ clones. So when a deal presented itself, I picked up a shiny new 9mm Canik TP9SFx. I can’t even justify this one to myself, but the price was just too good to pass up. And really, I wanted to see what all the fuss was about. So here’s a quick overview of it, along with my plans. Note that this is not meant to be a comprehensive review. It’s been covered plenty elsewhere, I’m just sharing the basics before I “make it mine”.

Positioned as a target model, this pistol includes a 5.2″ barrel.  The big selling feature is probably the trigger, which is pretty nice for a factory trigger.  It’s got a Warren Tactical blacked out rear sight with a fiber optic front. Two 18 round magazines are included, with factory installed +2 baseplates. There’s a rail under the barrel for lights and lasers, and an indicator in the rear of the slide to let you know the striker is cocked. Its long slide also has plenty of cuts to reduce weight while still offering loads of grip. Out of the box, that trigger, plus the long sight radius, make for a nice shooting pistol.

Canik presents their TP9SFx in a molded case with lots of extras. There’s a holster, extra backstraps, mag loader, and cleaning tools. Plus red and green pipes for the fiber optic. And different sized magazine release buttons. Other features include four different plates for all the popular optics.  Even a little slide racker to thread into the optics plate. Overall, this is a pretty solid offering for around $549 or so.

In a world where people love their Glocks, it might seem odd to even worry about aesthetics over function. But my opinion is that the TP9SFx is a little busy. Its slide has angled cuts, lightening cuts, and some tapering. Sure, I can appreciate the machine work that went into it. Yet with the rail under the barrel, and the grip having a different surface than the backstrap, there’s just a lot going on here. The extended slide release has two kinds of textures. Then the magazine release looks like it broke, and someone made a replacement in a high school metal shop. It’s like a less graceful version of my Ruger American Competition, right down to the four lightening cuts on each side of the slide.

On the bright side, it fits my hand pretty well. The undercut trigger guard allows me to get a decently high grip. I’m going to sand down the backstrap and install TractionGrips or something like that, because the texture there is terrible.  Unlike some other “competition” pistols, the slide release and magazine release are easy enough for me to engage with my thumb. So the looks get a pass, based on what I consider good ergonomics. Or at least ergonomics I can work with.

So how does it shoot?

Really, this was a bit of a surprise. I was advised to run 147gr rounds during the break-in, due to the heavier recoil spring. No failures, which was good. But it was embarrassingly easy to shoot the TP9SFx very well. We were outdoors on a windy day, and my cardboard box target had blown away. So we just shot my steel targets. At about ten yards, the 2″ and 4″ gongs were ringing with every shot. This isn’t really a great measure of accuracy, but it’s clear that the potential is there. Part of that is the fiber optic sight, part of that is the trigger. Now that I know it works, I can start the process of making it work better.

About that trigger. I haven’t bothered to put it on my gauge, because it’s not that light. And it’s got about a mile of pre-travel, or maybe a bit less. Then there’s some take-up, before it just breaks nice and crisp. The reset is super short, so follow up shots are nice and quick. So it’s sort of “meh” at first, but then gets really good. No doubt it’s one of the reasons Caniks are so popular, it just works. Much better than expected for a striker fired pistol. Despite this, I see that many owners have swapped it out. Personally, the trigger isn’t something I would bother with at this point.

First thing is a threaded barrel. I’m used to heavy CZ pistols that shoot flat. Comparatively, this Canik TP9SFx has more muzzle rise than I’d like. And it seems I’m not alone. So it’s getting a threaded barrel and a compensator. Next, I’ve got a spare Vortex red dot, so that’s going on there. While I really like them on my rimfire pistols, I haven’t used them much on a centerfire. So that will change with this pistol. Despite the fact that I shot it well enough with open sights. Sometimes, we do things because we can, not because we need to.

This isn’t my EDC, it’s purely for fun. Given that, I have a more or less blank canvas for other modifications. Might upgrade the trigger, although it doesn’t need it. But a friend with the identical pistol swapped his trigger, so I can see if that’s worthwhile before I replace mine. More likely, I’ll see about a lighter recoil spring for better cycling of the 115gr ammo I have. As much as I like the other magazine extensions that I’ve seen, 20 rounds seems sufficient. I’m open to suggestions, if anyone has them. Feel free to share below.

I’ll get the barrel, compensator, and optic installed for the next article in this series. Check back soon for that. In the meantime, I hope to run another couple hundred rounds through it. It’s been pretty fun so far. Cheap fun. If you’re looking to get one yourself, Palmetto State Armory has them in stock.