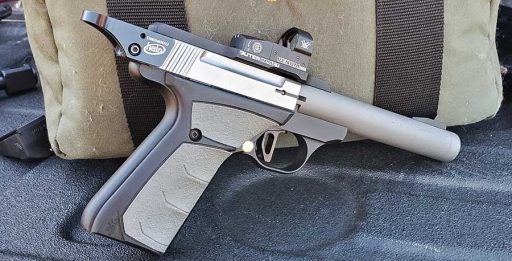 Outer Impact’s Browning Buck Mark Modular Red Dot Adapter was mentioned briefly in my second Buck Mark article last month. To recap a bit about Outer Impact, they make a huge variety of optic mounts. And it’s their M.R.A. (Modular Red Dot Adapter) that should appeal the most to rimfire enthusiasts. The key reason is their wide range of firearms and optics compatibility. This particular mount fits more than a dozen different Buck Mark variants. And it will accommodate at least 25 different optics. Instead of a dedicated mount that only works with a single footprint, you can use just about any available optic with this one mount.

At 4.902″ long, this adapter replaces the entire rear sight assembly of the Buck Mark. Rather than the usual 6061-T6 of the shorter and smaller plates, this one is machined from billet 7075-T6 aluminum. For such a long piece, that makes sense. After machining and being tapped for threads, each one gets an anodized black finish. On both sides it’s got the Outer Impact logo in white lettering too. As you can see from the photos, it works with factory barrels or the Tactical Solutions Trail-Lite.

To simplify installation, there are several screw packages included. As mentioned in my review of the mount for Ruger Mark pistols, this really does add value. Whichever optic you install today or six months from now, you’ve got the necessary hardware. I’m sure that lowers their cost, as they can carry a single SKU for the Buck Mark and not worry about which optic you plan to use.  This is a very versatile adapter for the modest $74.95 MSRP. Just be sure that you have a T-10 Torx bit and driver (or they can sell you one). Note the different patterns drilled and tapped in the photo below.

Installation of the M.R.A. for the Browning Buck Mark

As always, make sure your pistol is unloaded before starting. Remove the factory rear sight assembly. Set the M.R.A in its place, squared edge to the front, rounded edge to the rear. In the bag marked “MNT HDWR, as it contains the two necessary Torx screws. The longer screw goes into the rear hole, the shorter one up front. Same as the OEM hardware. Tighten evenly, then use a torque wrench set to 25 in/lbs to finish it up. Before mounting your optic, make sure the bolt assembly slides smoothly out and back. Outer Impact recommends some thread lock as well. Choose a non-permanent version.

Note that I had a little technical issue, unrelated to the actual mount. I had originally used this mount on my other Buck Mark. And then I took some photos while doing a full upgrade on this Buck Mark. Looking at them now, I’m not happy with the photos. Rather than take it all apart and do it again just for photos, I attempted to salvage the ones I had. So please ignore the fact that I switched between a Vortex Viper and Venom. And that the optic was already attached when I installed the mount.

Installation of the optic

Although I had originally used a Vortex Viper on my other Buck Mark, the Venom with its 3 MOA dot is my preferred choice. And the installation was quick and easy. Outer Impact provides comprehensive instructions on their site, directing me to locate the bag with M3 X 8 countersunk screws for this optic.  Later, I would install the Venom, using the included M3 x 6 round head screws. Whichever optic you choose, this is one of those times where it pays to go slow, alternating between screws so that they are torqued evenly. Because I hate trying to sight things in at the range, I did a quick bore sight with my Wheeler Laser Bore Sighter. It sticks to the barrel magnetically, and projects a laser. I just point it 25 yards away, and then line up the dot of the optic with the laser’s dot. At the range, I rarely need to make more than minor adjustments.

Although the optic sits up a bit over the bore, it’s still much lower than it would be on a Picatinny rail. Plus I get to lose the height of the optic’s Picatinny mount. And thanks to some thoughtful machining decisions, the M.R.A. almost looks like it came that way from the factory. Except for the Outer Impact logos. Either way, it’s doesn’t look out of place, like a tall rail might.

First, I need to point out that aesthetically, this pistol seems to have an unusual amount of appeal. I’ll lay out six really nice rimfires, and people gravitate to this one. And I just don’t get it. Maybe the understated grey and black is more appealing than the bright reds and blues of some of my other pistols. But everyone I take shooting really likes it. Which is unfortunate, because then I don’t get to shoot it as much. With the modifications I did, and the fine 3 MOA dot, it’s very accurate. That low mounted dot looks great, and it performs great.

Once nice thing about the Outer Impact Red Dot Adapter is that it’s mounted solidly. There’s no reciprocating slide to beat up my optic. We’ve probably put more than 1,000 rounds through this pistol, and it’s still holding zero just fine. I’ve seen some enthusiasts online express concern about losing zero when taking the pistol down for cleanings. But the mount returns to the same spot each time, and that has not been an issue so far.

Now that I’ve tried them on two different pistols, I’m pretty sold. My current optic collection includes Vortex Venom, Viper, and Razors. I’ve also got a UTG budget green dot, Viridian RFX 15 green dot and even a Crimson Trace. Any of them could easily be swapped to my Buck Mark with the included hardware. And I think that’s one of the best features of the M.R.A. Yeah, it looks great, and is easy to install. But if you upgrade optics (or downgrade), and like to try different options, there’s nothing more to buy. Outer Impact makes this a great value as well as a great performer.

Outer Impact doesn’t just offer optics adapters. Visit their website and you’ll find scope bases, sights, and even more adapter plates for a variety of rimfire and centerfire firearms. There’s much more than I have the time or space to list and they add new products fairly regularly. Check them out by visiting Outerimpact.com.

Questions? Comments? Have any of our readers used this, or any other Outer Impact products? What are your thoughts?

MagGuts +2 Conversion for Sig P365X and XL 12 Round Magazines

MagGuts +2 Conversion for Sig P365X and XL 12 Round Magazines