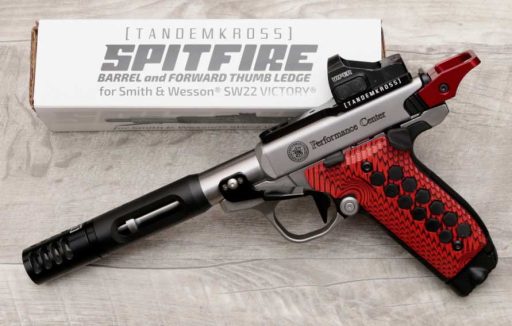 The TandemKross Spitfire barrel for Smith and Wesson’s SW22 Victory was officially announced earlier this month. Since I was already pretty deep into customizing my SW22 Victory, they offered to provide one for review just ahead of the release. After being sworn to secrecy, they shipped it, arriving the day before its actual release. That’s given me a few weekends of putting several hundred rounds through it. While there were a few teething pains, they were all traced back to other issues with the pistol. Once I sorted them out, it ran flawlessly.

Machined from stainless steel, the Spitfire has an overall length of 5.86″, and weighs 8.2 ounces. Add 1.23 ounces for their Game Changer aluminum comp, or 2.83 for the steel Game Changer PRO. The Game Changer is included, the PRO is an extra $20. Their weight is a bit offset by the long cuts on either side of the barrel, which reduce weight and vent heat. A Bentz chamber and 1:16 twist rate allows for great performance with a variety of ammo. This is the ideal chamber for most users – tighter than standard, but not as tight as a match chamber. Perfect for a fast-shooting pistol whether bulk or match ammo is used.

Up front, a timing nut makes it easy to time the included muzzle devices. And on the left side is a “Gas pedal” style thumb rest. Unlike a regular forward rest for the this pistol, no drilling/gunsmithing is required. And it’s got three positions, for a truly custom fit. This is easily one of my favorite features, when combined with their “Cornerstone” safety thumb ledge I recently installed. I can now get a solid, thumbs-forward grip, which really enhances shooting. The barrel is also designed to stay cool under high round counts, and even with four magazines, I couldn’t get it warm enough to affect accuracy.

I’ve been pretty critical of some features of the S&W SW22 Victory, but barrel swaps isn’t one of them. A single bolt allows removal of the upper, and another one holds the barrel to the upper. With the included wrenches, this really is a 3-5 minute swap. And that’s really if you’re taking your time. TandemKross includes a screw for the front sight, which my pistol lacked. It’s the Performance Center model, and uses an optic rather than iron sights. With the new barrel installed, I did a quick function check, and everything worked as expected. Short version: If you own the SW22 Victory already, you know how easy it is. If you don’t own one, well, it’s still super easy.

My first outing was full of highs and lows. Accuracy on our dueling tree was great, but there were a lot of failures to eject. Turns out I had bent the ejector a tiny bit when replacing the hammer. This is a known issue with the SW22 Victory, and one easily resolved. Then it didn’t always chamber the first round. That was traced back to the rear tabs on the upper being bent up too much. I had attempted to remove some play between the bolt and slide, and created too much friction. Those two issues were unrelated to the barrel, but made testing a bit of a challenge. That’s part and parcel for pistol that’s been taken apart and upgraded one way or another nearly every week since I bought it.

Once I fixed the things I “broke”, my SW22 Victory ate all the ammo I ran through it. That was a mix of bulk Federal, bulk Browning, and some Norma Tac-22. Again, it was dead-on when it came to the dueling tree. We also brought a pair of 4″ gongs, which were pretty easy to ring out to 25 yards or so. This is a pistol that should be able to shoot 1″ groups from a rest at 25 yards, with good ammo. Hitting multiple gongs in succession at this distance using bulk ammo may not sound impressive to some, but it sure is fun. If we get a day that isn’t horribly windy, or I stop by the indoor range, I’ll try to remember to punch some holes in paper, for those that care.

For this project, I started with the Performance Center version, which is a pretty nice pistol out of the box. Its carbon fiber-sleeved barrel was nothing to complain about. Did it need a barrel upgrade? That’s debatable. Though I’m certain this would be a nice upgrade over the base model’s barrel. And the thumb rest is definitely a worthwhile addition. But we’re not punching tiny holes in paper. That’s never been my thing. The slight increase in weight with this barrel isn’t really noticeable, as so much of the grip and slide/bolt are already so heavy. If anything, it’s balanced a bit better. And it’s easy get on target, and stay on target. Minor shifts up and down on the dueling tree are very controllable. Same with lateral movement, as you would have with Steel Challenge.

Overall, the SW22 Victory is a very capable pistol. The TandemKross Spitfire makes it even more so. Starting at $309, it’s not inexpensive. But you get a nice compensator, plus that thumb rest. And excellent heat management, if you’re shooting long strings. If you like attention, it’s a good conversation starter at the range too, with its futuristic looks. This would be a great upgrade option for anyone using their pistol for competition. And if you just shoot for fun, or competing casually with friends, it’s still a nice edge. Check it out at TandemKross.com, where you’ll find plenty of other performance parts for the SW22 Victory, as well as other firearms.

Other articles in my Project Victory series: