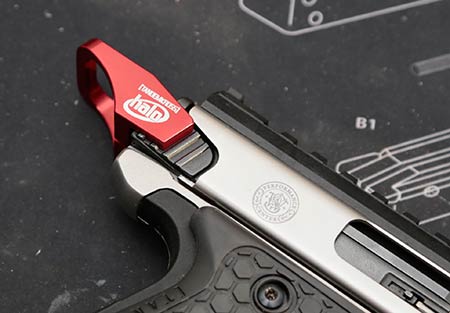 After shooting a friend’s S&W Performance Center SW22 Victory Target Model 6″ Carbon Fiber Target Barrel, I was left with two thoughts. One, the name is way too long, but they do make it clear that this is a target pistol. And two, I needed one. Smith and Wesson has taken the standard SW22 and given it a thorough overhaul. I’ve never been a fan of their looks, and hadn’t shot one, so I didn’t know what I was missing. Once I had some time with this pistol, that all changed. So I got my own, and of course, reached out to TandemKross to see how much we could improve upon this “Performance Center” pistol.

Smith and Wesson added some nice upgrades to their standard SW22. The most obvious is the 6″ carbon fiber target barrel with a custom muzzle brake. And they wisely chose the Tandemkross “hiveGrips” too. Looking closer, there’s an extended magazine release and a steel reinforced polymer thumb safety. The flat face trigger is adjustable for pre-travel and over-travel, and is one of the nicest factory triggers I have tried. Less obvious is the polished feed ramp tucked deep in the stainless steel frame. There’s even a beveled magazine well for fast reloads.

With an overall length of 11.25 inches, and a weight of 33 ounces, the Performance Center SW22 Victory is no lightweight pocket plinker. It’s a full-size competition piece. Part of that is due to the stainless steel frame, longer carbon fiber-sleeved stainless barrel, and Picatinny rail. But I find the weight isn’t a drawback. It’s light enough for swinging from target to target, yet has enough heft to keep it steady for slow fire as well. With most of that mass in the grip, upper, and bolt, it’s reasonably balanced, and not too front-heavy.

Since this is the “Performance Center SW22 Victory”, you might wonder why it needs any more upgrades. To be fair, S&W did get the trigger right. That’s a huge plus, and definitely my favorite feature, because I don’t like messing with triggers. So it’s a good gun, but not great. Because they really missed the mark on certain details. Some are personal preference, others are optional improvements, and a few are “This should have been done at the factory” pieces. I’ve been working with the folks at TandemKross for a while, and they have addressed all the big and little things that are holding this SW22 back. So I’m going to modify mine over a series of articles. And this is the first installment.

S&W had already contracted with TandemKross for their grip, so they must have known that the halo was available. Why doesn’t the Performance Center SW22 Victory include one from the factory? For a competition pistol, pinching that little bolt is hardly ideal. The entire gripping area is barely as large as my thumbnail. So the first thing I added was the $49.99 halo Charging Ring, as this is something I feel should have been on there from the start.

Installation could not have been easier. Line it up with the grooves on the bolt, and slide it on from the bottom up. Once in place, use the included screw and hex wrench to snug it down. I really like how the halo works on the SW22. It’s designed for one-finger charging, but if you still want to pinch with your thumb and pointer finger, it makes that easier too. If you could only do one upgrade, this might be it.

This is more of a personal preference. I have the hiveGrip and hiveBrid grips on other pistols, and like them both. The hiveBrid seems a bit narrower, and I wanted to try them out on the Victory for that reason, since it’s such a large frame to begin with. That, and they have what I feel is a great gripping surface. Textured G10 mixed with the rubber inserts allows for a good grip, even on hot and sweaty days.

When installing them, I had a few surprises. The slide lock is held in place by the left grip, and the magazine release spring is held in place by the right grip. Not a big deal, but I wasn’t expecting parts to just fall out when I took off the grips. It was still a quick swap, and the result is a comfortable, familiar grip on an otherwise new pistol. Sharp-eyed readers may notice that I used the factory grip screws, rather than the included engraved titanium ones. I felt the black ones look better with these grips. But TandemKross does include their titanium grip screws with this grip set for $49.99.

Of course, I also mounted my Vortex Viper, since this pistol model doesn’t include sights. Before I do anything else, I’m going to put a few hundred rounds of whatever ammo I have on hand through it. I haven’t touched anything that would affect reliability or accuracy, and want to get a baseline for both before making any other changes. It’s only had a few magazines through it, as I adjusted the trigger. There were no failures of any sort, but the true test is how it works with a variety of ammo, not just one brand. So be sure to check back soon for updates.

As always, I would like to thank TandemKross for providing their parts for testing and evaluation.

Comments? Questions? Have any of our readers tried out the S&W Performance Center SW22 Victory, or even the standard model? Feel free to share below.