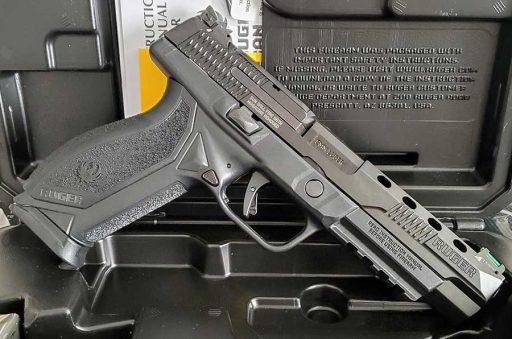 Reviewing the Ruger American Competition has been high on my list for a while. After trying out the MAX-9, and Security 9, it was time for a full-size 9mm pistol review. Where EDC pistols may have to compromise size, weight, and capacity, a “competition” firearm generally has no such restrictions. And that’s what lead me to reach out to Ruger for this loaner. I had just gotten some new steel targets, and wanted something fast and fun to ring them with. The Ruger American Competition definitely fits the bill there.

Model 8672 Ruger American Competition is only available in free states, due to the 17+1 capacity. Two of their slick nickel-Teflon® plated magazines are included. The slide and chassis are both black nitride stainless steel, with the chassis riding inside a glass-filled nylon grip frame. Its 5″ barrel with 1:16″ right hand twist gets the same black nitride finish. Overall length is 8.31″, height is 5.60″, and all that steel adds up to an unloaded weight of 34.1 ounces. Ruger points out that it’s rated for “Sustained +P ammunition use”, so feel free to shoot as much of the hot stuff as you can afford.

A fiber optic front sight is paired with a serrated, fully adjustable rear sight. Despite this nice sight setup, it’s also got an optics cut which accommodates a variety of brands using the Docter® footprint. Ports cut in the black nitride slide reduce weight, and serrations on top reduce glare. The Ruger American Competition has a user-swappable modular wrap-around grip system to fit different hands. Small, medium and large are included, and I stuck with the medium after trying them.  Ruger continues to find that nice balance between good grip and abrasiveness with their texturing too. For wrong-handed shooters, there is a slide stop and magazine release on both sides.

Inside, a pre-tensioned striker ensures ignition without a heavy trigger. And the barrel cam helps reduce felt recoil by distributing the force over a longer period of time. Takedown requires neither tools nor a pull of the trigger, and a port provides confirmation of a loaded chamber. In addition to the trigger safety, there’s an internal, automatic sear block.

Other functional and aesthetic features

The more time I spent looking at the Ruger American Competition, the more little details I found to appreciate. For example, the slide serrations are deep, and have cuts at multiple angles. They provide a lot of grip, even with sweaty hands. And the slide itself is 1.05″ wide, but the angled cuts and ports reduce that, visually, a bit. At the front of the slide, it’s all angles, tapers, and smooth edges for easy holstering. That theme of polygons and triangles follows over to the grip frame, slide lock, and magazine release. Unlike a carry firearm that’s more utilitarian, and not meant to be seen so much, this pistol rewards anyone taking a close look at it. Love it or hate it, some thought definitely went into the design.

Looks and features mean nothing if it doesn’t shoot well. So I grabbed some 115 gr range ammo and some steel targets, and headed to our favorite outdoor spot. The targets are the swinging kind, with a 2″ plate on top, and 4″ on the bottom. The sights were spot-on, and quick to use in bright daylight. At seven yards, it’s easy enough to punch the 2″ one over and over. Seated at my shooting bench, I could ring the 4″ one out to twenty five yards about 8 out of ten shots. That might be me more than the pistol though. More informal shooting at leftover clay pigeons confirmed that this Ruger is plenty accurate, even when I could do better, as mentioned in my Mantis X10 Elite review.

More than just accurate, the Ruger American Competition is easy to keep on target, shot after shot. Its 34 ounce weight is definitely biased to the muzzle end. Combined with the cammed barrel, recoil is tamed and muzzle rise is kept to a minimum. While the trigger is a bit heavy at around 6 pounds, it does have a short reset.  I can see why this might make it popular for competition. As far as reliability, it consumed hundreds of rounds of the cheapest brass and aluminum 9mm ammo without a hiccup. Despite some initial concerns, I never bumped the right side magazine release. And my thumb could reach the left side one without shifting my grip much. This allowed me quick and smooth magazine changes with those slick magazines.

Takedown is so simple, it should be a model for other manufacturers. No tools needed, and no trigger pull required. After removing the magazine and verifying that there’s no round chambered, lock the slide back. Then rotate the takedown lever to about the six-o-clock position. It will lock into place. Release the slide and pull it all the way forward and off. Removal of the guide rod and spring allows the barrel to come out. Reassemble in the opposite order. The level of cleaning and lubrication required will depend on the volume and quality of ammo. After a few range trips, a simple wipe and re-lube was all I did.

Swapping the modular grip panels for a different size is equally easy. An included Torx wrench is used to unlock the cam 1/4 turn. Then the grip module can be slid off. Slide a different size on, and 1/4 turn in the opposite direction locks it in place. No torque is required, it’s just a matter of rotating the mechanism. For whatever reason, the large one was a little more difficult to install and remove, compared to the others. Ruger also includes a plastic block for them when not in use, so they don’t get crushed and broken. After trying all three, I stuck with the medium one.

I’ve got another competition pistol that has an MSRP about twice that of the $649 Ruger set for this one. It makes everyone seem like a better shooter than they are. The Ruger American Competition achieves about 80% of that performance, at only half the price. I can hand it to a newer shooter, and they will ring steel or punch reasonably-sized groups fairly easily. That’s the main attraction of a full-size, nicely weighted pistol. While there is a lot of focus on smaller, high-capacity pistols right now, they are not as fun or satisfying to shoot. Although I only had it a few months before writing this review, there were zero issues. It’s rare that I can’t find something to complain about, but it never gave me a moment of trouble.

Even if you’re not shooting in a formal competition, it’s easy to appreciate this level of performance. And note that Ruger refers to it as a Pro Duty Competition pistol. With the optics cut and Picatinny rail on the dust cover, it’s also a great defensive arm. Add a flashlight, laser, or combo, if that’s your thing, and it’s a solid “nightstand” firearm. It may be bigger and heavier than most of today’s EDC options, but anyone who’s carried a .45 will tell you it’s perfectly doable. Either way, it’s an option to consider when accuracy and reliability count.

I’d like to thank Ruger yet again for providing their Ruger American Competition on loan. When the review period is up, I have to make the difficult decision of sending it back, or sending a check. It’s never easy with a pistol as nice as this. For more details, check out the Ruger website.

Awesome pistol. Too bad they are made in such limited quantities.