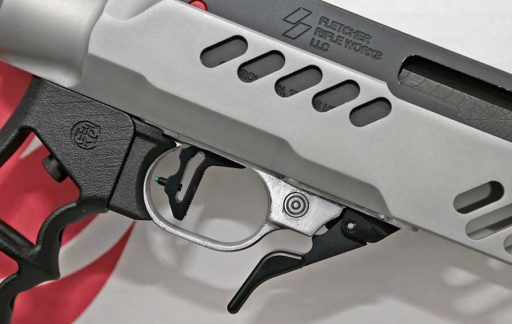 If you like happy endings, this Ultimate Trigger Kit story is for you. It all started out last year, when I was scraping together parts for a few projects. I reached out to friends, looking for a spare 10/22 trigger group. One of them provided the saddest trigger group I had ever seen. Sure, he priced it accordingly. But it was beat. Whoever he had gotten it from had tried to strip the black paint off this aluminum housing. Pretty sure they had used a dull screwdriver. And that wasn’t the worst part. Turns out the trigger plunger was jammed in there. It was a mess. I ended up drilling out the plunger and spring, which rendered it non-functional with an OEM trigger. Back into the spares box it went.

Fast forward several months, and I was getting ready to place an order with TandemKross. They had been exhibiting at the Great American Outdoor Show in Harrisburg, PA this month, and sharing photos on social media. One of the photos I saw was of their Ultimate Trigger Kit for the Ruger 10/22. Having already installed one some time ago, I was familiar with the design and function. It was exactly what I needed to rescue that old housing and make it useful again. Sign me up!

Ultimate Trigger Kit for the Ruger 10/22

This collaboration with Brimstone Gunsmithing is one of the best values in trigger upgrades. It installs in an OEM housing, and has very little pre-travel, along with adjustable over-travel. Instead of sending your trigger group to Brimstone, this can be installed at home. So there’s a lot less waiting. Another highly prized feature (for me, anyway), is that it eliminates the need for the factory plunger.

Each kit includes a new hammer, sear, a Victory trigger, and an extra spring not found in the standard OEM trigger group. TandemKross also includes a slave pin to make installation easier. They top all that off with the tiniest allen wrench, to adjust the over-travel pin on the trigger. This complete kit is priced at just $134.99. TandemKross provides a video with easy to follow installation instructions on their website.  For much less than an aftermarket trigger group, you get a trigger without much take-up, breaking crisply at around or under 2 pounds.

As you can see from the photo below, disassembly was done long ago. This trigger had seen some hard use, and some “Bubba” abuse. Before starting, I gave all the parts a thorough cleaning, and polished a few pieces, like the pin that runs through the trigger itself. Oh, I had also finished stripping the remaining paint, but left it in a “battle worn” state. No fancy Cerakote here, it’s straight up crap.

After the following the video instructions embedded below, I’ll admit to being a bit surprised that it worked. Whoever says the older aluminum housings are better is kidding themselves. Newer polymer housings have much better tolerances. So there was a bit of slop in this one, but the two springs negate most of that. And debate aside, this trigger still works great. As expected, it breaks at just around the two pound mark. Most of the ugliness is covered by the receiver as well. You might also notice that the trigger group got more than one upgrade, but I’ll save that for another article.

Moral of the story?

I could have just tossed out that housing, and the parts it came with. Written the whole lot off as too much trouble. But thanks to the smart design of this trigger kit, I was able to reuse the housing. And it’s actually much better than I expected, with the added bonus of looking, well, not terrible in my little Charger. So what is the moral? Don’t be a Bubba? Or maybe don’t give up too easily? No, it’s that TandemKross has some really great parts, and this just happened to work out well for me. It’s actually about as nice as the trigger in my polymer housing, just uglier.

The complete build, even though no one asked

When it came to choose which firearm this was going in, the choice was easy. My Fletcher Rifle Works 11/22 receiver is the newest, most modern “10/22” format receiver available. Topped it off with a Vortex Venom 6MOA red dot. Poking out the front is a carbon fiber Volquartsen barrel. This is nestled inside a Crazy Ivan Comp Lite chassis, with his carbon fiber tube at the rear. That’s got a Tailhook Mod 1 brace on it. For the grip, another Crazy Ivan product, in Nylon 12. Tactical Innovations bolt and KIDD charging handle complete this project. Some of the best brands went into this build. And a $25 housing for my TandemKross trigger. It’s a light and fun suppressor host.

Despite the tiny form factor, this is still a tack driver at heart. With a great trigger and high quality barrel, it’s held back by the optic. Designed to be fired hand-held, it should still capable of impressive groups when fired from a bench. I might have to mount a scope one day to see what I am missing out on.

As always, I’d like to thank TandemKross for their continued support. Their Ultimate Trigger Kit allowed me to use a trigger housing that I had almost written off as junk. Check them out at TandemKross.com.

Questions? Comments? Anyone else installed one of these triggers, or tried one out?