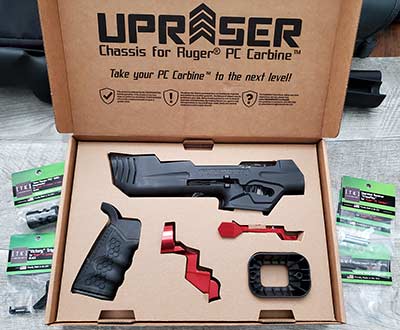 With the release of the Upriser Chassis for the Ruger PC Carbine this year, everyone had an opinion. Magwell funnel? Great! Extended magazine release? Awesome! Angled stock adapter? Hmm. In theory, it would be great for iron sights, and low profile reflex sights. But the reality is that many people would prefer a straight stock adapter. Then in May of 2020, they dropped the video below. Two things became apparent. One, they hinted that a straight stock adapter was in the works. And two, Alex from Marketing may or may not be dead. But at least he got to express his opinion.

Note: When discussing one of the biggest product releases of the year with your boss, maybe try to avoid certain phrases. Save comments like “It looks broken” and “It looks stupid” for the media and forum trolls. In all seriousness though, that was real feedback I’ve seen online too. Which is funny, as their actual customers had praise for this “bent” chassis. Fast forward to last week, and I had the brand new TandemKross Upriser Chassis with Straight Stock Adapter in my hands. Along with a bunch of other accessories. But we’re going to focus on the Upriser Chassis for this article.

Made from a lightweight, reinforced polymer, the look and feel of the Upriser should be familiar with anyone who’s handled a polymer handgun or modern rifle. For the most part, it follows the contours of the original furniture. At the front, it mates up the factory forend well. Most of the styling is pretty understated, up to just above the grip. At that point, it appears that concessions had to made for the stock adapter. And that’s where the styling takes an interesting turn. For me, it falls right in the middle between attractive and objectionable. But I’m not here to debate the merits of the design details any further. Now that it’s no longer “broken”.

Big on features, for its price

I currently have 8 different firearms in 7 different chassis’. So I’m starting to get a feel for price and features. And I’d say that for its $179.99 MSRP, the Upriser has a pretty good feature set. First up is the magwell funnel. I’m aware of another company offering one by itself, for $50. So that’s a nice inclusion. Then you’ve got the extended magazine release, which allows you to drop a mag with your trigger finger. Unless you’re left handed. In that case, you might be disappointed. But it works very well, where other aftermarket ones may or may not work at all. And you can choose red or black. I got the red just because it shows up better in the photos.

This is the first chassis I’ve seen that includes a grip. While any AR-style grip should work, TandemKross includes their hiveGrip for the AR. I have a similar grip on one of my Ruger 22/45 pistols, and it’s nice. The angle is a bit different from a standard AR grip, and I’m tempted to get one for another rifle I have. Finally, the feature that makes or breaks it for so many – the straight stock adapter. This too is available in either red or black. Considering all the controversy it’s created, it’s a very unassuming piece of machined aluminum. The important thing is that you can thread a receiver extension into it, and attach a stock (or brace, for your PC Charger) of your choice. I requested their $29.99 collapsible mil-spec stock and buffer tube. That’s in the photo above, which was a mockup for last week’s preview. Then a friend hooked me up with the Fab Defense stock in the photos below.

TandemKross has excellent instructions on their site for all their product installations, and this was no different. I did a quick read of them, and then I was ready. When it’s time to take it apart, I’m reminded that the PC Carbine is in many ways just an over-sized 10/22 Takedown. Pull the bolt back, push the lever forward, and twist the barrel off. It goes without saying that you should make sure your firearm is unloaded before starting, but removing the barrel makes it more difficult to have an accident. And no, don’t take that as a challenge. All the necessary tools, other than a phillips screwdriver for the magwell funnel, are included. Make sure you have some thread-locker, and a torque wrench too.

Swap the magazine release to the left, if you haven’t already, as the extended one will take its place. Despite what the instructions state, I had to remove the adjusting screw from the backside of the lever to get it to work with Glock magazines. Heed their warning about some thread-locker though. I use blue Loctite. From there, drop in the receiver. It’s a tight fit, and for a moment, I didn’t think it was going to happen. Then it dropped in. At this point, the front takedown screw gets installed, but not tightened, with some Loctite as well.

A Delrin washer holds the rear screw in place. That has to be installed before attaching the adapter through the chassis, to the receiver. Then, tighten the front and rear takedown screws a bit at a time, and torque to 30 inch/lbs. Now the grip can be installed. Whether using the included one, or another of your choice, use the supplied screw. It’s 1/4-20 x 5/8, while an AR screw is 1/4-28. So don’t screw that up. Finally, install the buffer tube (or receiver extension). It should go all the way until it bottoms, then back it out until it’s aligned. Lock it in place with a castle nut, and install your stock or brace.

The PC Carbine has always been fun to shoot, but I’m not a fan of “off-the-rack” firearms. The stock was okay, but not great. With the Upriser Chassis, it’s a different firearm altogether. Yes, my Vortex Spitfire is right at eye level. Had I chosen a smaller reflex sight, it would probably sit too low. Being able to adjust the length of pull is a necessary and therefore worthwhile feature too. The grip is comfortable. It’s worth mentioning a second time that I want to put the same one on my Ruger Precision Rimfire. Magazines drop with the press of my trigger finger. My support hand’s palm does not put enough pressure on the button to accidentally release it.

How much precious 9mm ammo did I burn through to fully test this chassis? Let’s just say that my wallet will recover, but it definitely left a mark. With the handling getting closer to that of an AR, it was fun to swing between a gong and some empty cans. Using Magpul PMAG GL9 magazines in 17 and 21 round capacity, I had zero issues. They slid right up into the magwell, and back out when empty a few seconds later. And the magwell seemed secure enough, if you’re a magwell gripper. Overall, everything worked as expected. If I end up having any issues in the future, I’ll update this article.

The Upriser Chassis with Straight Stock Adapter transformed my PC Carbine from something of a novelty (a 9mm takedown carbine) to a genuine contender in the 9mm PCC (Pistol Caliber Carbine) debate. I know the newer models have the option of pistol grips and adjustable stocks. But I was an early adopter, and got mine before those were options. And now I have no regrets. Aside from some small styling quirks, this is pretty much how I would have liked to see it set up from the factory. A proper handguard is still a “take it or leave it” consideration. The forend is just fine for my shooting style.

I’d like to thank TandemKross for allowing me to be one of the first to try this new version of the Upriser Chassis. If you want to get your own, or just check out all the other performance parts they offer, head over to their website. There’s a lot to see, for a wide variety of firearms.

Comments? Questions? Have any of our readers tried out either version of the Upriser chassis, or any of their other parts for the PC Carbine/Charger? Feel free to share below.