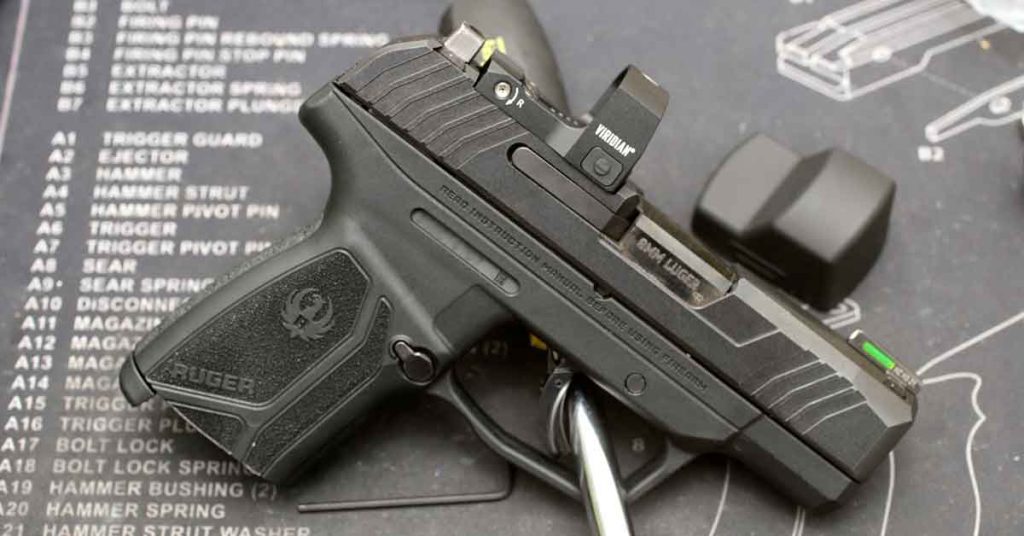 “Put a dot on it” has been a growing trend for some time now. And the Viridian RFX 15 Green Dot Reflex Sight is a great option when it comes to adding a reflex sight to a pistol. Most of my rimfire pistols have a red dot, and at least one of my 9mm “competition” pistols does too. But I wanted to explore the concept of a reflex sight on a carry pistol. Ruger had provided their very compact, optics-ready MAX-9 for review, and Viridian was kind enough to top it off with their RFX 15. A quick search, and I found that CYA offers an optic-compatible holster for this setup. All I had to do was throw them all together, carry it for a bit, and get in some range time. I can’t stress enough that this was a no-brainer for me. As much as I wanted to install it on a larger pistol, the MAX-9 is one of the smallest optics-ready pistols available, so it just made sense.

Green light is the most visible wavelength for the human eye. We can see those red dots pretty well too, but our eyes see green even better. So for day or night use, green is a smarter option. The downside is that making an optic with a green dot is more expensive. Same with lasers. But let’s stick with the upsides for now. In addition to being more visible, the green dot of the RFX 15 is also sharper, even with my astigmatism. With glasses, it’s very well defined. Without glassses, it is still sharper than red dots I have costing considerably more. And there is less “bloom” around the dot. So whether or not you wear glasses, it’s going to be better than red. Much better.

Designed for subcompact pistols, this sight features a durable 6061-T6 aluminum body that is also lightest (0.65 oz) in its class. It’s got a Shield footprint under the included detachable Picatinny mount. The 17x24mm viewing window is bright and makes it easy to find the 3 MOA green dot quickly. There are 8 visible brightness settings and 2 night vision-compatible settings. Users can choose from manual off/on function, or INSTANT-ON® technology with auto shut-off.

A single CR2032 battery provides up to 30,000 hours of constant use, depending on the brightness setting. An IPX6 water resistance rating means it will withstand high pressure water sprays. You can’t submerge it, but a little (or a lot of) rain won’t hurt it. Operating temperature is -4 to 130 degrees Fahrenheit. This is where I usually insert a joke about Utah weather, as that sounds a bit like the week between winter and summer here. It will function far outside my own personal operating range, but within extremes that I want no part of. Viridian backs up this optic with a 7 year warranty.

I’ll skip the Picatinny installation, as that shouldn’t require instructions anyway, and this was going on an optics-ready pistol. After verifying that my MAX-9 was unloaded, I removed the plate over the optics cut. Well, I would have, if there wasn’t already an optic on there. But we won’t talk about that disappointment. With the Viridian RFX 15 Green Dot Reflex Sight removed from the Picatinny mount, I lined it up on the slide. Using the included screws and wrench, I snugged it down, alternating side to side for each 1/4 turn or so. Per the instructions, it only needs 12-15 inch pounds. If you don’t own an inch-pound torque wrench, I highly recommend buying or borrowing one. They’re much cheaper than replacing damaged optics.

The Quick Start Guide notes that the arrows on the RFX 15 are for the direction of the bullet, not the dot. They also suggest shooting a 3 shot group, and then adjusting as necessary before shooting another group to confirm proper zero. I adjusted mine to roughly line up with the excellent factory sights of the MAX-9, which I knew to be spot-on. The dot sits right above the front sight now. As long as the point of impact matches the point of aim horizontally, then it’s just a matter of vertical adjustment to suit the individual shooter.  My preference is to have the dot cover my target. That would coincide with the center of the target sitting on top of the front sight. It could probably use a little fine tuning for competition, but at defensive distances, it’s as close as I need it to be.

First, let me just point out that the difference between red and green needs to be experienced. My eyes can pick up a 3 MOA red dot against dirt and brush pretty quickly, even in the sun. But the green is just there, no need to hunt for it. Hammering little gongs at 7-10 yards is quick and easy with the Viridian RFX 15 Green Dot Reflex Sight. Well, finding the dot is easy, I’m still shooting 115gr rounds out of a 3.2″ barrel. So not every round was a hit. That’s on me, not the sight. If you scroll back up a few photos, there is a 60 pound propane tank in the background, around 70 yards out. I was able to lob a few rounds at that, just for fun.

As mentioned, I have plenty of optics on my rimfire pistols, so this wasn’t really a new experience for me. If you haven’t used optics on a pistol, there is a learning curve. For me, it was just a matter of drawing and shooting. While I would use the manual activation for competition shooting, I left it in INSTANT-ON® mode for most of my range testing. I can’t be sure how much motion it needs to activate, but it was definitely ready to go by the time it was at eye level.

Carrying with the RFX 15

Admittedly, this hasn’t been a long term review, so I can only comment on what my experience was over a couple of months. With my IWB holster, the RFX 15 sits completely out of sight. That kept it well-protected. I’ve heard stories of carry optics collecting dirt and lint, which is a valid concern. Rain and snow can also become problematic. Really, anything that blocks the emitter, or gets on the lens, could be an issue. But I experienced none of that, except for the occasional fingerprint or smudge on the front of the lens. Which seemed to be from handling, and not drawing.

Speaking of drawing, or even just carrying, at 0.65 ounces it was never noticeable. That’s slightly more than a single 9mm round weighs.  So no real weight penalty. And it never poked me in the side. Or snagged while drawing. My regular outfit consists of shorts and a t-shirt, by the way. So I’ll go on record as saying that unless you have an issue with something obscuring the emitter or lens, there’s no downside to carrying with this optic. Look for a full review of the holster from CYA Supply at a later date.

On the left side is the (+) button for turning it on, and up. On the right is the (-) turning it down and off. When left on, it will go to sleep after 2 minutes without motion. And as I learned at the range, it comes right back on once it’s moved. There are eight settings, which are more than enough to go from indoors to bright sun. It’s even got two night vision settings, which I sadly cannot test properly. Note that there’s no auto brightness option, which I like. Whatever it was set to last, is what it will come on at in the INSTANT-ON® mode.

For carry, I would have no issues with the INSTANT-ON® option. If I had to un-holster it, it was on. And then it would shut off  if there is no movement after 2 minutes. It may or may not turn off in the holster, depending on how much I was moving.  At home, setting it down in a safe place will put it back to sleep until needed. Just be sure that you’ve selected the appropriate brightness setting first. If you choose to the use manual mode, it does come on at whatever it was set to previously. Holding the (-) button turns it off, rather than cycling it to the lowest setting first. And the battery is good for 30k hours, so swapping it annually is about all that’s required for reliable function.

I’ve watched videos of the RFX 15 taking more abuse than I would ever dish out, so I have no concerns about durability. And it’s definitely an improvement over some of my red dots, which cost more than the RFX 15’s $289 MSRP. It’s lower overall than my other optics, with a more square, rather than wider, window. Which keeps it the same width as my pistol. Having to remove it (and re-zero) to swap batteries once a year may seem like a small check box in the minus column. But not for me. That’s a worthwhile tradeoff for being able to co-witness with the factory sights. I really can’t find a downside with the optic itself. It wasn’t in my way, and never got hung up on anything. Really, it wasn’t noticeable at all. If it provides an edge when needed, I can’t argue against that. Overall, I think this is a great option for carry pistols.

All that said, I am really looking forward to trying it out on some full size 9mm pistols as well. My main focus is on recreational shooting, and while this optic should be more than durable and reliable enough for EDC, I just know it’s also going to be a winner on something more “competition” minded.

I’d like to thank Viridian for sending this RFX 15 to review. It’s an impressive optic with some great features at what looks to be a competitive price too. Check it out, along with the rest of their products, at viridianweapontech.com.