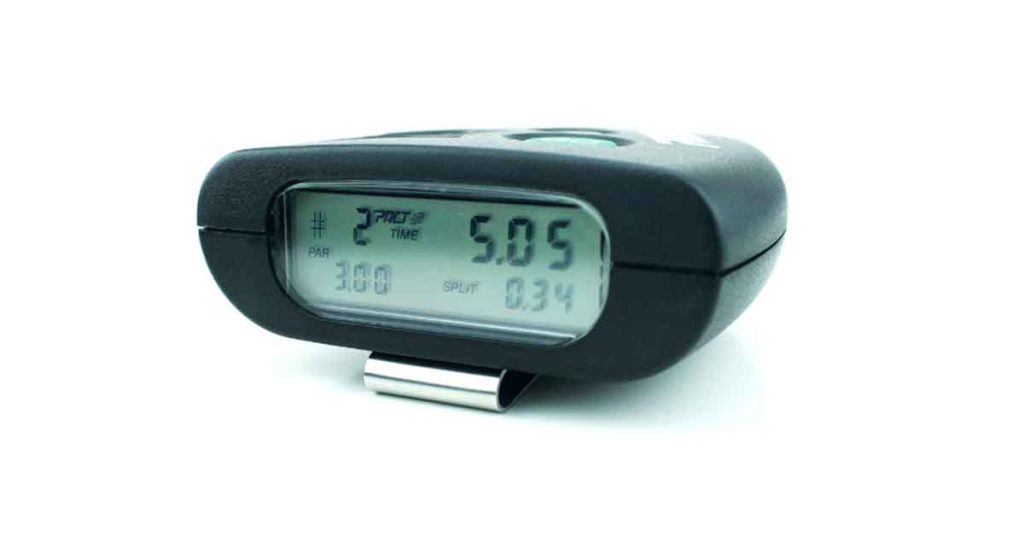 It didn’t take me long to realize that the PACT Club Timer III is not just a tool for competition. Even if you don’t compete, it will absolutely improve your shooting. As I spent more time with it, it became apparent that it was going to make a big difference in my progress. This is an excellent piece of gear for training new and seasoned shooters. That’s because it’s not merely telling you what your split times are. There’s far more to it than that. Whether you compete, or want to hone your defensive skills, it can provide invaluable feedback.

First, this thing is a little bigger than I expected. Don’t confuse it with those little timers that look like pagers from the 90s. It’s 5.5″ x 4.75″ x 2.5″, and weighs a little over a half pound. I don’t mind the size and weight, because it’s got nice big buttons, evenly spaced, a big screen, and a very loud buzzer. On the back is a metal clip that’s been riveted on. Below that is the door for its single 9V battery. It feels solidly constructed, and worth every penny of its $129.95 retail price.

The top of the PACT Club Timer III contains an easy to read LCD display that works well, even in bright sun. On the side (which I consider the “face”), are the microphone, loud (seriously) buzzer, and four sealed buttons. There’s a green GO button, a RVW (review) button, as well as up and down arrows. No switches, nothing mechanical to break. If it does have an issue, the good folks in Euless, Texas (where it’s made) will take care of you.

How to use the PACT Club Timer III

With only four buttons, the timer is very easy to use. Pressing any button turns it on. GO and RVW will shut it back off when pressed at the same time. Otherwise, it shuts off on its own after 15 minutes. It can be set to start instantly or with a 2-3.5 second delay on pressing the GO button. Options include counting time to first shot and splits, plus total time, or setting a PAR interval. For my purposes, I didn’t use the PAR option, as rather than limiting myself to a set amount of time, I wanted to measure overall time, with splits.

The belt clip makes it easy to practice alone, no need to have someone hold it nearby. I just clipped it to my belt, hit the GO button, and at the buzzer, started shooting. The timer tracks each shot and cumulative time. After the last shot, just press RVW to go into the Review Mode. The screen will display the # of shots and total time on the top line, and below that, the split time on the right. With each press of RVW, it will advance through the shots, showing the split and cumulative time above it. The arrows allow you to go back and forth, should you want to check that 2nd or 9th shot again. It’s actually more difficult to explain than it is to use. I quickly found that it was very intuitive to use. GO, shoot, review.

What kind of feedback can the PACT Club Timer III provide?

Originally, I was going to use it as just a shot timer. How quickly can I clear a plate rack or my KYL rack was all I wanted to know. Sure, it provides time to first shot, each split time, and the total time for a string. Over time, I started to pay more attention to how quickly I was able to take that first shot. Then I saw the value in using it to time my first shot drawing from a holster. My first timed jam gave me another taste of what I can work on. Seeing on that little screen exactly how long it took to clear that jam and fire another round gave me a new goal. Magazine changes added to that. Before I knew it, I had a series of drills I could run, instead of just knocking down plates.

When we first got the PACT Club Timer III, everyone tried to get the fastest reaction time for their first shot. From the low ready position, we’d fire a string of ten rounds at a steel gong. It was certainly fun to see how fast we could get that first shot off, and then how quickly we could put nine more rounds on target. But that was too easy, and we all had similar times. Switching it up by drawing from a holster turned that on its head. Smooth is indeed fast. From this I realized that working on smooth presentation was the first half of the equation. It’s still a work in progress, but each outing, I can spend some time drawing and taking that first shot, to measure progress made at home.

I’ve got some handy 3D printed dummy rounds in .22 LR and 9mm. Dropping one into a magazine with 9 live rounds is the easiest way to simulate a failure to fire. If you don’t have someone who can load your magazines for you, don’t sweat it. Just grab 2-3 magazines, and try to randomize where in the stack your dummy rounds go. And don’t peek when loading a magazine into your pistol. As you go from bang, bang, bang to “click”, you’ll find out just how quickly you can clear that dummy, chamber another round, and get back on target. Scrolling through the split times will give you a clear picture of just how fast (or slow) you really are under pressure. This drill has very valuable practical applications.

Part of me wants to say that if you need to reload, you’ve lost already. But that doesn’t mean it’s not a good skill to practice. For rimfire, it’s fine to start with 5 or 10 rounds. For centerfire, it may make more sense to download magazines to 2-5 rounds. Focus on getting rounds on the target, and when the slide locks back, drop the magazine and get a fresh one in there. In a competition where everyone has to reload at some point, mastering this will give you an edge. Again, the timer doesn’t lie. You’ll have some a big ugly number in your split times. Stay consistent with your shot to shot times, and work on bring that interval down. This is also something that can be practiced at home with empty magazines, then reinforced with the PACT Club Timer III.

So what did I learn from this?

What I thought would just be a simple tool for measuring time as we have some fun with rimfire turned into much more. If you’re a competition shooter, this will definitely help you improve. And if you’re not into formal competition, it will still help you increase your skills. It’s one thing to think that you are good at shooting strings on target. Or that you’re quick with presentation, reloads, and jam clearing. The PACT Club Timer III gives you a chance to put your money where your mouth is, so to speak. One of the most important elements of progress is measurable feedback. Introducing a little stress (the timer) also makes that feedback more applicable to real-world use.

I can’t say for sure if my numbers were good or bad when I started this review. It doesn’t matter. What does matter is that I am seeing incremental improvements in all areas. Because the PACT Club Timer III is a tool that if applied correctly, can help anyone become a better shooter. Whether for sanctioned events, informal plinking with friends, or honing defensive skills. With ammo prices being so high, this is a smart investment for anyone wanting to get the most out of every round fired.

I’d like to thank PACT for providing their Club Timer III. They had a contest earlier this year, and I won it. Which is great, because now I don’t have to return it. If you want to get your own, they are available at plenty of local and online retailers, or just order direct from pact.com.