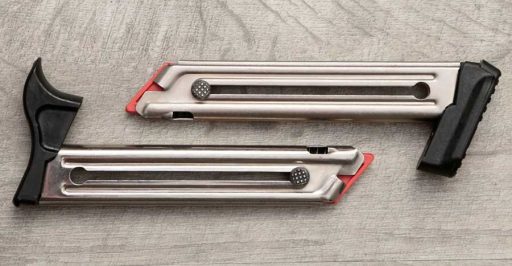 TandemKross offers some great upgrades for Ruger Mark IV magazines. They’ve got their Maximus Plus1 followers, Green Springs, and either MarkPRO extended bumpers, or Tomahawk hooked bumpers. Each of these is affordable, easy to install, and offers benefits for the recreational or competitive shooter. I had them send me a bunch of each so that I could try them out, and then share what I’ve learned with my readers. Here’s a breakdown of each, top to bottom (of the magazine). I’ll even demonstrate how easy they are to install.

To be clear, I have never experienced an issue with the factory follower. So why upgrade? Well, this red follower is certainly easier to see. It will be more obvious when the magazine is empty, compared to the black follower. But it’s safe to say that unless you see shiny brass, the follower color is less important. So why upgrade? That’s where the Plus1 part comes in. These let you load eleven rounds instead of ten. They are legal for rimfire competitions that allow shooters to start with eleven rounds.

Will one more round make a difference in competition? You bet. And if you’re just a plinker or a hunter, one more round is nice to have too. Are most aftermarket parts for the Mark pistols better than OEM? Well, yeah. Probably. What’s the cost of being able to load an additional round? These Zytel followers come in two-pack for $19.99. Note that they aren’t specific to the Mark IV, and will work in the Ruger Mark III and II pistol magazines as well.

“Green Springs all the things” could be my motto. I’ve got them in my Ruger magazines, and my Buck Mark magazines too. Because they work. It doesn’t take long for factory springs to show some wear. This usually manifests as failures to feed. The spring gets soft, and can’t push that round up. That might be an inconvenience when plinking, but if it happens during a competition, it can cost you a win. And if you’re out hunting for dinner, it could mean going home empty handed. Don’t let that happen.

These shot-peened springs are green, so you can tell them apart from the OEM springs. They offer longer life, and better reliability. Like the Maximus Plus1 followers, they work in a variety of magazines. Check the TandemKross website for the full compatibility list. They’re only $9.99 for a pack of three, making it easy to keep extras on hand. Not that they will need to be replaced often.

By design, the Ruger OEM magazines are sleek, and flush fitting. Which is great, until it isn’t great. If there is one thing flush magazines aren’t good for, it’s fast reloads. Sure, most of us can drop a magazine and slam another in pretty fast. But in competitions where mere fractions of a second separate winners from losers, be a winner. Human palms are not perfectly flat, leaving just enough room for error. Adding a simple extended bumper allows the magazine to fully seat without being flush. No matter which part of your hand you use to bang them into place, they lock in positively.

The MarkPRO has a larger, flat base, and a little extra real estate to make removing a magazine easier as well. Since they are made from Zytel, multiple drops shouldn’t be a concern, either on dirt or concrete. They’re $24.99 for a pair. Note that they fit all 22/45 magazines, which are designed to work with the Mark II, III, and IV series having the 1911-style grip angle.

TandemKross takes the specialty magazine bumper one step further with their Tomahawk. Do you have large hands? Like, NFL quarterback large? Even if they’re not that big, the Tomahawk might be for you. It’s an extended base with a curved hook. The perfect place to rest your pinky if you have big hands. Also a great hook to quickly grab if you need to strip a magazine and reload. And let’s be honest, they look pretty cool too.

Super easy to install, these Zytel bumpers also fit all the 22/45 magazines. And they’re priced at a reasonable $24.99 for a two-pack. Not sure whether to get these or the MarkPRO? Read on to find out why I have both, and which I prefer.

To save some time, I am going to walk through the installation of the Maximus Plus1 follower, Green Springs, and then the bumpers. Because the process is pretty much the same whether you replace one item, or swap all three. It starts by having a clear work space, and probably some safety glasses, since springs are involved. Even though I have swapped magazine parts dozens of times, I still get the occasional surprise. Lost parts are one thing, eye injuries are a whole other headache. So don’t risk it. That said, disassembly is pretty straightforward. Use your thumb to apply sideways pressure to the base of the magazine while you push the pin in. Then the base will slide off. Your spring (with the pin in one end) should fall out at this point. Slide the follower down until you can remove the follower button, then the follower, and you’re ready to start reassembly.

Install the Maximus Plus1 follower first. It should match the feed angle of the magazine body, and only goes in one way. Next, push the Green Spring in. It has its own circular seat on the underside of the follower. You’ve probably already peeked at the installation video, so the MarkPRO needs to be assembled before installation. Compress the spring using the base pin, and then slide the MarkPRO on. It too only goes on one way. If you’re installing the Tomahawk, it’s a little extra effort with the Green Spring’s added tension. I use a tiny screwdriver jammed into the body to compress the spring, and then it will slide right on. Final step is to push the follower all the way down, and reinstall the button. If in doubt, the product links above will take you to the installation videos.

Once loaded up a few, I hit the range. For the most part, they worked fine, and the bolt still locked open after the last round. Some magazine/ammo combinations had a little trouble chambering the second round. This should be easy to troubleshoot, but I had a handful of friends shooting my pistols, and some brought their own ammo. With four pistols, six kinds of ammo, and multiple magazines, it didn’t seem to be a consistent issue, except with Federal bulk. Other than that, I got one extra round before I needed to reload. When loaded with ten rounds, everything worked flawlessly for hundreds of rounds. So I just need to do some more ammo testing and see if I can narrow down any potential problem ammo.

Both bases made it easy to palm the magazine into the grip, but my preference is actually for the MarkPRO. Turns out I really like an extended, but flat base. Although the Tomahawk has a small edge when pulling magazines out. And both dropped free. Since they are functionally the same when shooting, I’m not going to worry too much about which one might be “better”. Especially since I have a decent quantity of magazines.  These allow me to show other shooters the options available, and that’s a win right there.

First, note that with the Maximus Plus1 follower and Green Springs, squeezing in that 11th round is going to take some effort. At least with the last round. But they all go in. If you don’t have a loading tool for single stack .22 magazines, get one. TandemKross offers one for $5.99. Your thumb will thank you. As mentioned, there were some issues with chambering the 2nd round when loaded to 11. I’ll continue to watch for that, and determine if it’s related to ammo, the magazine, or a specific pistol. And it may resolve itself over time. So the 11 round capacity is sure thing, but I’m not certain about reliability just yet. If you’re planning on competing, definitely do your own testing first.

Doing an overhaul of several magazines can get a little pricey. But there are some performance benefits to be had, which can certainly be worthwhile, depending on your use case. Certainly, anything that can provide an edge in competition is worth pursuing. Use the links above to read more about each product, view current pricing, and check out the instructions as well as customer reviews.

As always, I’d like to thank TandemKross for providing their products for this review. It’s nice to try things out, find out what works great vs good, and how I can improve on some already great pistols.