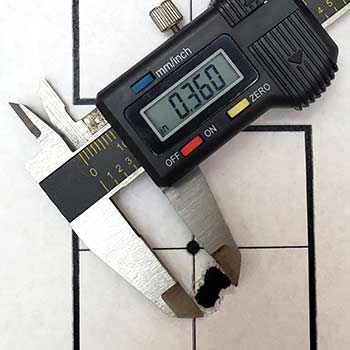 Best group with the bulk Federal ammo. But not repeatable.

Our first rimfire project, the Project 10/22, is coming along nicely. It’s got a new stock from Hogue, and a barrel from WhistlePig GunBarrel Co. And I topped it off with a Vortex Crossfire II 4-12×50 adjustable objective scope. With the scope, it weighs in at about 1/2 pound more than a factory new 10/22 with wooden stock and 18.5″ barrel. But it’s still a weight savings, as the scope itself is over 20 ounces. Our stated goal was to build a lightweight tack driver though, so performance counts too. And to that end, I had done a little bit of cleaning up the internals, mostly just polishing out some rough spots. Before we do anything else, I needed to get some benchmark groups out of it. So I took it to the range to break in the barrel, and see how it shoots. **Note that WhistlePig is now known as Acculite22.com.**

Breaking in the barrel

The instructions for the WhistlePig AccuLite barrel advise to shoot 100-125 rounds, with cleanings every 25 rounds. It was snowing, so all groups were 5 shots off a bench at 25 yards, indoors. I brought Federal 36gr HP bulk, American Eagle 38gr HP bulk, CCI 40gr Mini Mags, and some RWS 40gr HP Subsonics.  While dialing in the scope, my first group was about .68″, which isn’t a bad start. From there, I had several groups anywhere from .57″ to just over an inch. At 25 rounds, the group was 1.17″. After cleaning, the next group was .56″. And so it went, with groups getting smaller, but still nothing to write home about.

After the second cleaning, I did shoot a .36″ group, which I wasn’t able to repeat. Around the 75 round mark, four rounds went into a .25″ hole, and a flyer ruined that group. Once I was over 125 rounds, I switched from the cheap bulk to the CCI. Do I have the only 10/22 that doesn’t like CCI? Some half inch groups convinced me to save that ammo for later, as that was worse than the bulk stuff. I was able to put 4 rounds of the RWS into a .39″ hole, with a flyer blowing it up to an inch. Like the CCI, I eventually gave up on the RWS. It’s four times the price of the bulk ammo, yet wasn’t giving me anything special in this rifle.

It’s too early to predict how well our project rifle is going to shoot. At this distance, indoors, I’d want to see no bigger than .47″ groups. And although I had a few, I wasn’t able to get that as consistently as I would like. On my second range trip, they were smaller overall, but I can count on a flyer to ruin a good group. I’m left-eye dominant, and shoot right-handed. My right eye’s vision isn’t good, and it tends to fatigue quickly, so I try to shoot my groups faster than I should. I’ve got a bolt action .22 with a much better trigger, but I can’t compare the results I get with that. Mostly because I shoot that slower, and it’s a much heavier rifle with a steel barrel and wood target stock.

Does it matter? Of course it matters. I want to give this rifle to my wife, and while she has her own vision problems to contend with, she deserves a rifle that’s more capable than she is. Otherwise, what’s the point in practicing? We’ll be using it to hit 1″ and 2″ steel spinners out to around 50 yards. And this rifle could do that with cheap bulk ammo. Over time, we plan to add distance, or shoot smaller targets. Which is where we will start to see some limitations. Before I start looking for better (meaning, more expensive) ammo that might give us better results, I’m going to give it a better trigger. Because the factory Ruger trigger isn’t designed for precision work. And I think that in the long run, a lighter trigger will help with consistency. Stay tuned, as that’s covered in the next installment of the series.

Do you have any advice on the flyers? Tips, suggestions? As always, comments and feedback are welcome.

Related posts in this series: